It’s time for another low level show but at least there might be some new names to fill out the ranks. That could be interesting and if they continue to have one name on here, we could be in for a slightly stronger version than we have been put through for years. But probably not. Let’s get to it.

We haven’t seen Titus in a big around here but he’s in pants. Titus drives him up against the ropes to start and then into the corner for a change of pace. Some uppercuts fire Gulak up a bit and he fights back with right hands of his own. That’s fine with Titus, who knocks him hard into the corner, followed by some shoulders to the ribs.

Gulak manages to knock him down for a change and slaps on something like an Octopus. That’s broken up with straight power but Gulak gets in a dropkick for two instead. The chinlock doesn’t last long as Titus flips him down and hits a sidewalk slam. A big boot into the Clash of the Titus finishes Gulak at 5:49.

Here are some Draft results.

We look at New Day being split up.

We look at the Fiend attacking Kevin Owens on Smackdown.

Kevin Owens vs. The Fiend

This is Fiend’s first ever match on television. Owens sends him straight into the corner to start and hits the Cannonball…but Fiend pops back up. The crossbody drops Owens to the floor and there’s a clothesline to turn him inside out. Back in and Fiend no sells another shot before knocking Owens outside again. Sister Abigail onto the announcers’ table has Owens down again and we take a break.

Back with Owens hitting three straight superkicks to knock Fiend down into the corner. Another Cannonball connects and Fiend stays down for a bit, setting up a third Cannonball. They head outside again with Owens hitting a DDT on the floor, followed by an apron splash. Owens hits the Pop Up Powerbomb through the announcers’ table but Fiend is right back up. The Mandible Claw goes on inside again so Owens hits a Stunner, which doesn’t break the hold. Owens is out at 9:59.

Post match the lights go out and here’s Alexa Bliss to stare at the Fiend. They both look back at Owens and then stare at each other again to end the show.

The monster is back:

Here’s Randy Orton to start things off. He’s ready to win the title in the Cell, but one thing you can’t deny is that 2020 has been the year of Drew McIntyre. Not only has McIntyre become WWE Champion, but he has been running through his competition. That’s all well and good, because last week he got taken out by the RKO, and that is going to be the case again in the Cell.

Cue McIntyre, who says he kicked Orton in the head at Clash Of Champions for everyone else, but next time, it’s going to be for himself. Drew wants to fight now though and the brawl is on at ringside. Orton gets dropped onto the announcers’ table and bails, with McIntyre saying he has three hours to do this tonight.

Hell In A Cell rundown.

Tozawa shouts a lot and smiles to start before taking over on Carrillo’s arm. They trade some wristlock reversals until Tozawa headscissors his way out of a headlock takeover. That means a standoff until Carrillo grabs a more successful headlock. Back up and the high angle springboard wristdrag has Tozawa on the floor, where Carrillo sends him into the apron. They head back inside with Tozawa breaking up the moonsault to send us to a break.

We come back with Tozawa kicking away and slapping on a chinlock. Tozawa hits a snap suplex and chops away to cut off a comeback attempt. The seated abdominal stretch goes on before it’s off to an Octopus to put Carrillo in even more trouble. That’s broken up and Carrillo hits a spinning kick to the face. Carrillo kicks him down again and backflips into a moonsault for two. Tozawa rolls him up for two but misses the spinning kick to the face. A torture rack into a faceplant finishes Tozawa at 9:31.

The winner gets a title shot at Asuka, on commentary, at some point in the future. Before the match, Nia says either she or Shayna is going to win the battle royal so everyone can jump over the top right now. The brawl is on instead and we get the Nia vs. Tamina showdown, with Tamina being thrown out in a hurry. Billie goes after Jax and gets sent to the apron, where she hurts herself by shouldering Nia in the ribs. Nia headbutts her out as Asuka is very, very excited on commentary.

Jax shrugs off the group elimination attempt and dumps Mandy and Dana at once. Everyone goes after Nia again and Shayna gives them the final boost for the elimination. Nia freaks out…..and drives Lana through the announcers’ table again. We cut to the back where Orton and McIntyre are brawling and take a break.

Back with Billie having been eliminated during the break. Lacey and Nikki fight in the corner until Lacey forearms her out,. Shayna Kirifuda Clutches Riott on the apron but can’t get her out. The Clutch has Belair in trouble again but she flips out and tosses Baszler for an upset. The Riott Squad tosses Belair and we’re down to Morgan, Riott, Evans and Natalya. It’s time for the quick tag match, with the Squad being sent over the top and eliminated at the same time, leaving us with Evans vs. Natalya for the title shot. Lacey grabs a waistlock before kneeing Natalya in the ribs.

A big slap ricks Evans again as Asuka has left commentary and is watching in the back for no apparent reason. They fight out to the apron with Lacey being sent into the post but saving herself. Natalya charges into a boot and has to hang onto the middle rope with her feet dangling. She gets back up as well until Lacey tries a hurricanrana for some reason. That earns her a whip into the post for the elimination…but here’s Lana, who was never eliminated, to knock Natalya off the apron for the win at 11:24.

Post match here are Orton and McIntyre to brawl again, with agents and referees breaking it up to end the show. 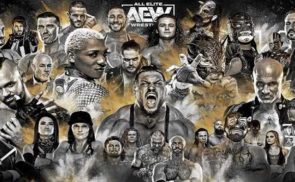 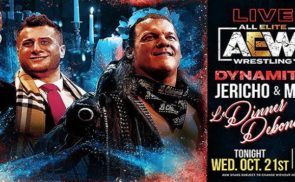