The Deadman and The Boss go to hell. WWE has posted a new video to their YouTube channel, in which they show the full match between The Undertaker and Shane McMahon inside Hell in a Cell, from WrestleMania 32.

As the opening bell sounded, Shane McMahon tried to go toe-to-toe with The Phenom, using his fleet-footed style to dance circles around his opponent. The Deadman soon had enough and overpowered Shane with powerful strikes. He continued to dominate the contest early on, meeting all of Shane-O-Mac’s offensive flurries with the pure power and experience only the legendary Phenom could deliver.

However, even seven years since his last match, Shane proved he was as resilient as ever. The Undertaker tossed him repeatedly into the cell like a ragdoll, and tried to end the bout with The Last Ride following a brutal leg drop on the apron. Shane-O-Mac continued to resist, however, kicking out of a pinfall. And when The Undertaker brought steel steps into the ring, Shane responded once more, managing to lock in a triangle submission hold.

The WWE Universe waited with baited breath for Shane-O-Mac to tap out, but an unbelievable reversal into the Sharpshooter left all of Dallas in shock. Though both competitors were left reeling, Shane managed to unleash a flurry of strikes in the corner before retrieving a trashcan from under the ring. Realizing what was coming as Shane placed the trashcan on the Undertaker’s chest, the capacity crowd in AT&T Stadium rose to its feet as Shane-O-Mac leaped across the ring for a jaw-dropping Coast-to-Coast.

Still not enough to bury The Undertaker, Shane next found a pair of cable-cutters and removed the bolts on one of the cell’s panels. Whatever he had planned was stopped short when The Phenomdrove Shane through the loose panel of steel mesh onto the German announce table. The Undertaker then dismantled the announce tables and devastated his opponent with monitors before taking the battle into the crowd.

Shane still managed to recover first, delivering two crushing blows with a toolbox and adding the exclamation point in the form of a monitor. With his opponent out on top of an announce table, Shane-O-Mac ascended the monstrously high cell. The WWE Universe then watched in stunned disbelief as Shane jumped off the cell to deliver an elbow drop.

Unbelievably, The Undertaker rolled out of the way, causing Shane to crash through the table and onto the stadium floor. Even more unbelievable, though, was that the mangled McMahon continued to ask The Phenom to bring the fight to him. With a look of pure shock at his opponent’s fearlessness, The Deadman carried Shane back into the cell. It was there that The Undertaker – perhaps mercifully – delivered a Tombstone Piledriver to secure the win.

I was there live for this match and seeing Shane jump off the cell was still one of the most memorable moments I have ever seen in person. You knew the spot was coming, but it didn’t matter; the atmosphere inside the AT&T Center for that was incredible.

What did you think of the match between The Undertaker and Shane McMahon from WrestleMania 32? 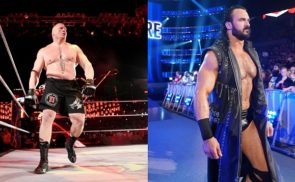 Who Brock Lesnar Would Face Should He Return To WWE

Tags: Hell In A Cell, Shane McMahon, The Undertaker, WWE