The End of an Era. WWE has posted a new video to its YouTube channel, in which they show the full Hell in a Cell Match between Triple H and The Undertaker from WrestleMania XVIII (28). Billed as “The End of an Era,” Shawn Michaels served as the special guest referee.

From there, it was war. The Undertaker — a Superstar whose current wellbeing Triple H has called into question — looked as dangerous as ever as he blackened his opponent’s eyes with deliberate right hands.  The Game barely had an opportunity to familiarize himself with the dangerous environment before The Phenom was introducing his forehead to the business end of the steel steps.

The brutality brought out the worst in Triple H. Wielding a steel chair the way a barbarian would a broadsword, The King of Kings battered his foe with such aggression that even HBK begged him to stop. Still, The Undertaker would not be deterred as he struggled to his feet and told Shawn not to call for the bell.

By then, The Game had grabbed his sledgehammer and warned Michaels to end the match before he ended Taker. HBK considered it, nearly calling for the bell before he was suddenly pulled into Undertaker’s Hell’s Gate out of nowhere. With Michaels out, Triple H went in for the final blow. That’s when The Deadman introduced him to Hell’s Gate.

The Deadman answered with a Tombstone. The Game fought right back.

Triple H hit another Pedigree. The Undertaker rose from the dead.

The emotion in Shawn Michaels’ tear-soaked face said it all — this match wouldn’t be finished until one of these men was finished.

In the final moments of this “End of an Era” Match, three of WWE’s most iconic Superstars stood in front of more than 78,000 WWE fans and revealed their true selves. Defiant to the end, a battered Triple H crotch chopped his adversary, knowing he was done for, but choosing to go out just as he came in. The Undertaker, as ice-cold as ever, shrugged his latest victim away before delivering a final Tombstone. Shawn Michaels, no longer able to stomach the brutality of in-ring competition, turned his face away.

And then it was over. The match. The decades-long conflict. The era.

The Cell was raised as HBK stood above The Undertaker and Triple H with tears in his eyes, studying the carnage. Fireworks erupted in celebration for The Deadman’s unbelievable 20 – 0 accomplishment, but at that moment it wasn’t about a record. Reaching out their hands, The Phenom and Michaels helped The Game to his feet and together the three exited the ring.

Joined as one, the legends walked up the entrance ramp and into the locker room, and then they were gone. And so was the greatest era in sports-entertainment.

This was awesome, and the build-up to it was even better. There will never be another trio like this in the history of sports entertainment. And that is a good thing because these three are some of the best ever.

What did you think of the Hell in a Cell match between Triple H and The Undertaker from Wrestlemania XVIII (28)? Leave us a comment below, or post a comment on our Facebook page! Also, be sure to sign up for our newsletter! 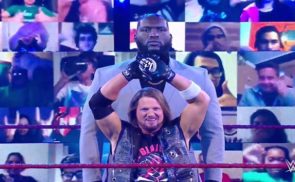