It’s time to start the second year as well as beginning the process of finding a new #1 contender. That means the first round of a tournament to crowd Jon Moxley’s next challenger, with the finals on November 7 at Full Gear. I’m not sure what to expect from this but it should be a wrestling heavy show. Let’s get to it.

Boy starts kicking at the legs to start and even manages a head kick from the apron. Wardlow misses a charge and winds up on the floor, where he catches Boy’s dive. That’s broken up so Boy tries again, only to get powerbombed into the post instead. Back in and Wardlow pounds away before blasting Boy with a clothesline for two. The knee out of the corner is broken up as Boy hits his own knee to the face.

Wardlow gets knocked to the floor for a suicide dive to the back, followed by a slingshot DDT back inside. A low superkick lets Boy go up but Wardlow pops to his feet to cut that off. Wardlow loads up a super gorilla press but Boy reverses into a super hurricanrana instead. A backstabber out of the corner sets up Boy’s top rope double knees for two and the near fall leaves Boy down. Wardlow rolls out to the apron so Boy follows, only to get caught with the F10 back into the ring. One heck of an F10 gives Wardlow the pin at 8:26.

We look at Eddie Kingston’s promo from last week, with Kingston promising to make Jon Moxley quit for the World Title.

Confirmed for Full Gear: Jon Moxley defends the World Title against Eddie Kingston in an I Quit match.

Moxley talks about his history with Kingston, who may not have said he quit. That’s because he was unconscious when he got choked out. Instead, Moxley is taking his friend back at Full Gear and ending this once and for all.

Omega’s entrance now includes listing off his accomplishments (including the amount of times he has broken Meltzer’s five star scale) and dancing women in swimsuits with brooms. V Trigger and One Winged Angel finishes Kiss at 35 seconds.

Orange Cassidy is asked about his match with Cody next week. Cassidy: “We’re off to Cincinnati.” After that few years old Bill Belichick reference, Cassidy says “whatever” with regards to his training. Then he plays with a monitor.

Cody and Arn Anderson arrived earlier and talked about gaining weight while he was away. He’s needing the weight for all of the giants he faces around here and needs to be a real heavyweight. Now it’s time to get ready for the title match.

Eddie Kingston talks about what his boys have been doing as of late and how successful they are going to be. Then it’s off to Moxley, and yeah what he said is true. Kingston had to go here though and look what it has gotten him. He has never quit on anything before and he won’t at Full Gear. Moxley is going to have to go to a dark place on November 7, but that’s where Kingston lives.

Eddie Kingston is on commentary. They go with the armdrags to start and Penta rolls him down into an ankle lock. That’s broken up and they go to the pinfall reversal sequence for two and then some zeroes each. They stand up and have the big chop off until Penta takes it to the apron. Fenix knocks him to the floor though and hits a big corkscrew dive for the crash. Back in and Fenix tries a rope walk but Penta avoids the kick for another crash as we take a break.

We come back with Penta chopping away and hitting a flipping DDT for two. Penta gets caught up top though and it’s a super Spanish Fly for a very near fall. Back up and Penta tosses him into the air, where Fenix flips forward, into a powerbomb for two more. Fenix comes up holding his arm but is fine enough to snap off a spin into a Canadian Destroyer for the pin at 14:12.

The Best Friends say that was an accident but Sabian and Miro don’t seem convinced.

Evil Uno is here with Cabana. Feeling out process to start and they run the ropes until Cabana says STOP, allowing him to snap off an armdrag. Page is back up with some chops and the running shooting star press gets two. We take a break and come back with Page hitting a fall away slam to set up the slugout.

Team Taz wants to know why Will Hobbs is taking his time in accepting their invitation. Is he some kind of a big guy now? As for Darby Allin, he’s getting a TNT Title shot at Full Gear and Taz isn’t happy. Earlier today he talked to Tony Khan, who said Ricky Starks could have had the title shot if he had beaten Allin. WELL OF COURSE HE WOULD HAVE because Starks only lost because of a cheap ending. What do Brian Cage and Ricky Starks get? Starks talks about how he has proven his worth time after time already and now someone has to pay. That is going to be Allin, some place and some time. He’s putting Allin in the grave.

It’s time for Le Dinner Debonair with Chris Jericho and Maxwell Jacob Friedman. After getting the waitress’ name wrong, MJF orders a 20 ounce porterhouse with a baked potato and he’ll take that well done. Jericho orders the same, but he’ll have it medium well. MJF changes it to medium, setting off a back and forth until Jericho wants his blue (extra bloody rare). With the waiter off to find a new eraser, Jericho talks about a town hall with the Inner Circle next week. He doesn’t like MJF’s Ratings Ruler, because it has as much of a chance of getting over as, and they say together, Orange Cassidy.

They agree that they’re never going to get rid of each other…..and we hit an old Vaudeville style musical number, complete with synchronized dancing and the curtain pulling back to reveal dancing girls. The lyrics involve them being each other’s shadow and beating up a Moxley. They sit back down and get their meals, which they realize is horrible because they need to send this back. They shout their own versions of the waitress’ name to wrap things up.

King starts with an attempt at a rollup but gets kicked in the face for her efforts. Some knees to the face have her in more trouble and Baker pulls the arm around the post. Back up and King hits a kick to the face, only to get caught in a Sling Blade. A DDT sets up a fisherman’s neckbreaker into the Stomp, meaning it’s time for the Lockjaw to finish King st 4:03.

Here’s what’s coming next week, including Orange Cassidy vs. Cody for the TNT Title in a lumberjack match.

Young Bucks vs. Butcher and Blade vs. Dark Order vs. Private Party

The winners get a shot at FTR, on commentary, at Full Gear. Matt armdrags Silver into the corner to start and it’s Blade coming in to get taken down without much effort. A double dropkick has Blade in trouble and an elevated dropkick puts Butcher down as well. Isaiah Kassidy comes in to kick Nick away and it’s a double nip up but Matt comes in and it’s a Bucks vs. Party staredown. The double superkicks are blocked so Party hits their own as everything breaks down.

Quen dives onto Silver and then does it again to Reynolds, with Dax Harwood saying he could just punch him in the face instead. Butcher and Blade are sent into each other and the shooting star press gets two on Blade with Butcher making the save. We take a break and come back with Silver missing a top rope double stomp but feeding Quen into an enziguri into a Stunner into a German suplex for two with the Bucks diving in for another save.

The hot tag brings in Kassidy, because we’re doing tags again. The Silly String hits Reynolds and it’s a top rope splash/top rope legdrop combination with the Bucks diving in a second time. Butcher and Blade hit Full Death on Kassidy with the Bucks doing their thing again, meaning it’s time for Nick to clean house with kicks and strikes.

Nick dives onto Private Party on the floor and it’s a double superkick to drop Butcher. The Bucks call out to FTR and it’s a top rope backsplash/Tombstone combination for two on Butcher and Blade with Private Party making the save. The Meltzer Driver is broken up but Kassidy is cradled into a rollup to give the Bucks the pin and the title shot at 13:29.

Post match the Bucks get in the ring but here’s a masked man with a chair to Matt. FTR jumps Nick and give him a spike piledriver, followed by Matt’s leg being Pillmanized. The masked man is Tully Blanchard, who is rather happy with FTR to end the show. 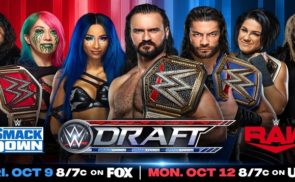 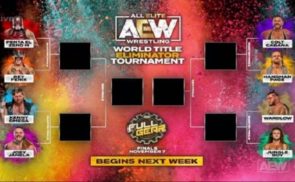