Bray Wyatt defeated Finn Bálor at WWE SummerSlam on Sunday, August 11. The man now known as “The Fiend,” stepped into the ring and not only surprised the Toronto audience with his newfound intensity, he also impressed them as well.

This was Bray Wyatt like fans have never seen before. The WWE faithful has always known that he was capable of great things. But knowing and seeing are very different of course. Now that The Fiend has finally made his debut and proved just how capable he is, it seems that Bray Wyatt is finally headed in the right direction.

Wyatt has always been close. The fact is, he’s been close from the very beginning. His initial Monday Night Raw debut as the head of The Wyatt Family in 2013 was something special. Bray was the smiling devil, the smooth-talking villain who led his followers with a silver tongue. Wyatt was The Eater of Worlds and WWE was his playground. He was the master of his world and he held that whole world in his hands.

But even then, Bray was a mystery. He cut amazing promos and many of those promos, while  indeed creative, were also confusing. The more fans listened, the more they questioned what the point was. Was Wyatt speaking just to fill time, or were his words actually leading somewhere?

Watch Bray Wyatt’s in-ring debut as The Fiend at SummerSlam!

This was especially true as his singles career began to develop. Wyatt would deliver his usual bit of brilliance on the mic before the match, but then he would lose that match. He would also lose the feud. While this wasn’t the case every time, it did happen often enough that many fans actually began to tune out. But why was that?

Why would the WWE audience, who had grown very accustomed to tolerating one formulaic promo after another, suddenly decide to turn on the one guy that was offering something different? The truth is that the mood of fans did not necessarily change because of Wyatt himself. It changed due to WWE’s apparent unwillingness to actually do something with him.

Bray became a broken record over the next few years. It was the same old thing every time The Wyatt Family were on the screen and despite how much his fans tried to deny it, the point was obvious. Wyatt was falling victim to WWE’s machine and that machine relies heavily on nonsensical 50/50 booking.

The problem is that kind of booking just doesn’t work and it really never has. If everyone is evenly matched in the win/loss category, then no one can stand out. Even Bray, who had absolutely been a breath of fresh air in the beginning, was nothing more than a character. But if that character turned babyface? Then maybe something good would come of it.

That was exactly what many fans all over the world were hoping for and it seemed like the most obvious move to make. Bray was getting cheered more often than not and in many ways, he was something of an antihero. Had he stepped up to Triple H during the height of The Authority’s reign, who knows what would have been? Maybe The Eater of Worlds would have finally realized his potential then.

WWE did seem to make an effort with him during several different points during his run, but it just never seemed to be enough. Even his showdown with The Undertaker in 2015 failed to live up to expectations. It could have been Wyatt’s night to shine, a Hall of Fame worthy moment that he could have built his career around. But it just didn’t happen that way.

Of course when he won the WWE Championship in 2017, Bray Wyatt immediately sped to the frontline of the company. His win came from out of nowhere and it was the much needed shot of main event adrenaline his career truly needed. Maybe WWE was finally in his corner after all. Maybe Bray was finally on his way.

But it wasn’t until Bray finally turned face and joined Matt Hardy in 2018 that everything seemed to be moving forward. Wyatt would finally get the chance to show what he can do and more importantly, he could do it alongside one of the company’s most popular acts. The Deleters of Worlds were entertaining and they were fun. Bray worked like a man with the weight of the world off his shoulders and it showed every time he was in the ring. Wyatt was born to be a character babyface, which is exactly what his fans knew from the start.

So when that character once again turned heel and began dressing like Mister Rogers, those same fans were understandably concerned. Where was happening? How could WWE once again drop the ball with one of the most intriguing personalities that had ever performed in Vince McMahon’s ring?

But when The Firefly Fun House vignettes eventually led to the birth of The Fiend, the plan suddenly became clear. Bray Wyatt was finally in a position to make some serious waves in WWE and he actually had the right vehicle to make it all come together. This was different than anything he had done in the past and that became evident at SummerSlam.

From his music, to the camera cuts, to his ring gear, Bray Wyatt was indeed a new character. But when the bell rang, he was a new man. He didn’t behave like the Superstar fans knew before. The Fiend moved with a purpose. He was focused, he made very step count and there was no wasted movement. He was quick on his feet and he was sudden with his attacks. But best of all, The Fiend was no longer just a creepy character. He was absolutely scary.

So what happens now? Bray Wyatt as The Fiend is off to a great start. However the same has been true before. But before, he didn’t have the hook that he has now. Will that make the difference this time, or will WWE once again lead him down the wrong path? The fact is Bray Wyatt has weathered the storm of bad booking and he’s earned the opportunity to prove he can succeed on a high level. Wyatt has the stage. He has the skills. Now, he finally has the spark. 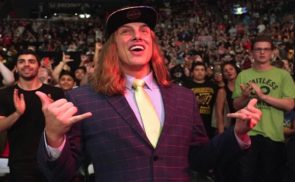