The Usos will challenge Heath Slater and Rhyno for the Tag Team Championship at No Mercy on October 9, but don’t think they’re waiting for the pay-per-view to stake their claim as the top dogs in SmackDown’s tag division.

The pair turned heel by taking out American Alpha and injuring the leg of Chad Gable, and they completed that villainous transition tonight with a new look and new entrance music.

The two-time former champs teamed with Konnor and Viktor of the Ascension to take on American Alpha and the Tag Team Champions. The crowd was firmly behind Heath and Rhyno, but some brutal offense from the Usos soon took out the champs.

The pair targeted Slater’s leg this time, taking him down and locking him in one-legged crab submission, forcing the champion to tap out.

It was a dominating performance, and you can expect the leg injury to play a part when Slater and Rhyno defend the titles at No Mercy.

SmackDown’s tag team division is looking hot, and you can be sure that the Usos will be at the top of the mountain very soon. 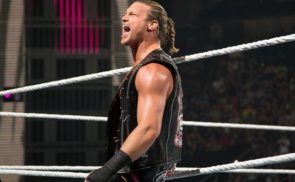 Dolph Ziggler Puts His Career on the Line at No Mercy