Our random wrestling show of the week is back and I’m really not sure what that is going to mean. In a reversal of things that I said for years about Main Event, I’m running out of ways to say that things are different around here and that is a very good thing. I’m curious to see what we get, though it might not wind up working out. Let’s get to it.

Shanky and Jinder Mahal are here with Veer as usual. Veer powers him into the corner to start and Jeff knocks himself down while trying a shoulder. Hardy is sent throat first into the middle rope and we’re already in the neck crank. Jeff fights up but gets taken down by the hair.

The nerve hold goes on again but Hardy fights up with a sitout jawbreaker. This time Hardy’s comeback actually works, including some shots to the head but the Twist of Fate (possibly with a botch as we cut to Mahal and Shanky) is blocked. Veer sends him into the corner for some running clotheslines and the baseball clothesline finishes at 4:31.

We look back at Edge returning to challenge Roman Reigns.

Here is Jimmy Uso to call Edge out. Cue Edge, who asks Jimmy if he gets what is going on. Jimmy is doing everything Roman Reigns wants, because he is Reigns’ b****. Yeah this is a trap, but it’s a trap for Jimmy. Edge goes to the ring and the fight is on, with Edge sending him shoulder first into the post twice in a row. Jimmy is back with a superkick and a ram into the steps, followed by a bunch of right hands. A big boot cuts Jimmy off and it’s a crossface (with a sleeper for a change) to make him tap. Edge grabs a piece of chair for the regular Crossface to mimic the Wrestlemania photo from earlier to end the show.

Nikki’s name has gone from Nikki Cross to Nikki ASH to Almost A Superhero Nikki Cross. Reginald is here too because you just need nine people here for a match. Doudrop and Naomi start but Eva tags herself in and actually drives Naomi into the corner. A single forearm sends Naomi into the corner and it’s already back to Doudrop. Naomi kicks Doudrop to the floor and hits the dive onto everyone else.

The parade of dives is on until Eva is left alone in the ring. Bliss comes in and screams her to the floor as we take a break. Back with Bliss forearming Doudrop but getting headbutted down for her efforts. Jax comes in to hammer on Asuka and it’s off to Baszler to work on the leg. That doesn’t last long so Bliss channels Reginald, with Baszler breaking things up. Eva comes in, ducks a kick from Asuka, and hands it back to Baszler again. Everything breaks down with Nikki’s top rope splash connecting for two, only to have Jax (Nikki Jax according to Smith) Samoan drop her for the pin at 12:24.

Benjamin grabs a headlock to start but gets armdragged down for an early standoff. This time Shelton tries wrestling him down to some better success, only to have Garza slip out again for another reset. It’s Garza’s turn as he hiptosses Benjamin down, leaving him rather stunned. Benjamin is back up and sends him over the top to the floor as we take a break.

Back with Benjamin running him over and grabbing a half camel clutch. With that not working, Benjamin grabs a snap suplex for two. The reverse chinlock goes on, with the reverse being dropped in a hurry. Garza fights up and hits a kick to the head but Benjamin rolls through a rather high crossbody. A whip into the corner has Benjamin in trouble though and the delayed Lionsault is good for the pin at 9:15.

We look back at Kofi Kingston’s rather good argument with MVP, setting up this week’s main event.

MVP works on Xavier Woods’ arm to start and then powers him down without much effort. Woods goes after MVP’s recently healed knee though and hammers away on the mat. Kofi Kingston comes in off the top with a shot to the knee and then slaps on a hammerlock. That doesn’t last long so Lashley comes in to unload on Kingston in the corner.

A neckbreaker gives Lashley two but Kingston slips power of a powerslam and kicks him in the face. Lashley isn’t having that and pounds Kingston down in the corner, allowing MVP to come back in for some right hands of his own. Kingston knees his way out of a delayed vertical suplex though and it’s into the corner for a short form Unicorn Stampede.

New Day sends them outside for the big dives and we take a break. Back with Lashley snapping off a suplex to Woods, setting up an armbar. MVP comes in to work on the arm as well but Woods shoves him away without much effort. If’s back to Kofi to clean house, including a Ballin Boom Drop to MVP. Everything breaks down with Lashley being knocked outside, allowing Trouble in Paradise to finish MVP at 14:36. 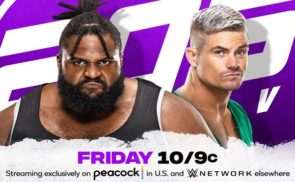