There’s one more thing to do. Over the weekend, WWE presented its annual Summerslam show, which was certainly eventful. The show was the first major event following Vince McMahon’s retirement from the company, which meant that things were changing in a hurry. WWE needed to do something big for the show and that is what they did in the main event, though there was one more thing to do.
The main event of Summerslam was a Last Man Standing match with Roman Reigns defending the WWE Universal Title against Brock Lesnar. During the match, Lesnar used a tractor to lift the ring up, which stayed off the ground throughout the rest of the show. After the show was over, Lesnar got back into the elevated ring to retrieve his cowboy hat, which earned an ovation from the crowd.

It was a strange visual. Check out what Lesnar did after the show:

Opinion: This might not have meant that much, but it served as a nice enough sendoff for Lesnar. The visual alone is worth a look, just because it isn’t something that you see very often. Lesnar had to get back into a ring and climb up, making it one of the most unique things you will see in wrestling. Your take on the match may vary, but that is an image that will be memorable for a long time to come.

What did you think of the match? Will Lesnar wrestle again? Let us know in the comments below. 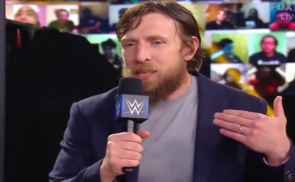 An Interesting Goal: How Bryan Danielson Tried To Get Fired From WWE 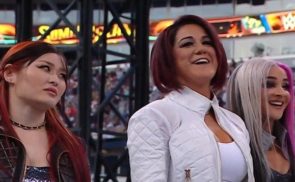