What’s new is new again. There are certain gimmicks and characters that are iconic for the people that perform them. Some of them have been around for a long time and it is almost impossible to imagine them as anything other than what they are. At the same time though, some of them are just doing the same thing for years for no reason other than because nothing else ever comes along. One person who has done the same thing for a long time now has changed things up and it seems to be for the better.

New SmackDown Women’s Champion Bayley debuted a new entrance on Saturday in Odessa, Texas. The new entrance begins with her traditional theme music before the lights go out and a new theme song begins to play. The Bayley Buddies are also gone and Bayley slowly walks to the ring. This comes a day after Bayley changed her look by cutting and dying her hair, as well as destroying the Bayley Buddies with an ax. She went on to defeat Charlotte to become the SmackDown Women’s Champion again.

This certainly is a different one. Check out how Bayley’s new entrance goes, complete with new music:

Opinion: This is the kind of thing that they had to do for Bayley and really, it is long overdue. I’m a big Bayley fan and have been for a long time but it is clear that something needs to change as what Bayley was doing was running uphill with an anchor. You can only do the same thing so many times before it stops meaning anything and that has been the case with Bayley for a very long time now. Maybe this is the big change that she needs and if so, maybe she can have a brighter future than she has had before.

Do you like the new direction for Bayley? How far can she take it? Let us know in the comments below. 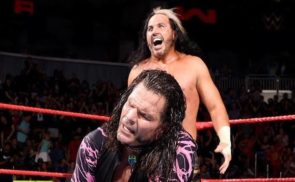