So we’re back to this show after a week off and…I’m really not sure how much it matters. The Cruiserweight Title is now defended on NXT so how much importance is there going to be in having a show that takes place after the biggest show of the week? I’m sure the show will be watchable enough, but I don’t know how long it’s going to stick around. Let’s get to it.

We open with a recap of Lio Rush beating Drew Gulak to become Cruiserweight Champion on NXT.

Nese headlocks Lorcan down to start but it’s off to Burch in a hurry. A series of kicks take Lorcan and Burch down at the same time with Burch being dragged into the corner. Nese slams Lorcan down but can’t hit a belly to back suplex as Lorcan backflips out and brings in Burch off an ice cold tag.

That doesn’t last long either as Nese takes him into the corner and hammers away, setting up a quick chinlock. A spinning kick to the face gives Nese two and it’s a reverse chinlock this time around. That lets commentary go into a history of Nese always siding with someone who can help him at the momen. Gulak comes back in and works on a wristlock but Burch shoves him away and rolls over for the tag.

The running uppercuts rock Nese and Lorcan hits a top rope flip dive onto both of them. Back in and Gulak gets DDTed for two, followed by Burch’s powerbomb into a jackknife cover for the same. Nese comes back in and hits a rolling right hand to Lorcan, who is fine enough to dive in with a headbutt to save Burch. Nese’s 450 gets two as everything breaks down. Nese gets knocked outside and the assisted elevated DDT finishes Gulak at 11:46. 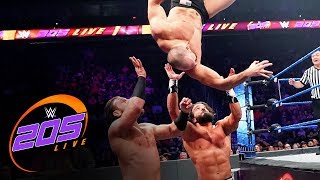 After losing the title on Wednesday, Gulak says that change is the rule and he is the law.

Lio Rush had his first photo shoot and can’t believe he’s here. Everything has been worth it.

Daivari runs his mouth about being a high roller in Las Vegas who gets to come and go while everyone else is stuck here. After he beats up this local jabroni, he’s going to triple his money at the craps tables. Bey gets punched in the face to start and a backdrop puts him on the floor. Back in and the Iconoclasm connects, allowing Daivari to chill on top for a bit. Bey gets in some left hands and a knee to the face, only to walk into a release Rock Bottom. The hammerlock lariat finishes Bey at 2:33.

I’m not sure if this is going to work: 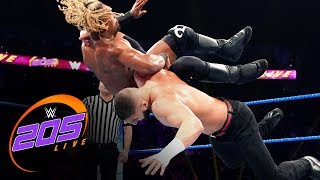 Lucha House Party has been drafted to Smackdown.

No DQ. They stare at each other to start until Tozawa punches him out to the floor. That means it’s time to grab a kendo stick each with Tozawa getting in the first shots. A right hand to the face drops Kendrick again and Tozawa kicks him in the head. With that not working, Kendrick heads outside again and grabs a chair to pelt at Tozawa’s head to block a suicide dive.

A DDT onto the chair gets two and it’s time to duct tape Tozawa’s wrists to the top rope. That means some free shots with the kendo stick before Kendrick grabs more chairs. Two of them are set up but Tozawa gets out and drops Kendrick back first onto said chairs. Here are even more chairs, bringing the total to about ten or so. They fight over a suplex, with Tozawa finally dropping him onto them. Nice spot, though it was better when Tozawa and Mike Kanellis did it back in May onto the open chairs.

A table is brought out and gets the pop of the show but Kendrick kicks him down and hammers away with the stick. Tozawa kicks him in the face though and the backsplash from the apron puts Kendrick through the table. Back in and Tozawa puts Kendrick on more chairs but here’s Mike Kanellis to lay Tozawa out. Some kendo stick shots onto the chair onto Tozawa knock him silly and Kendrick is dragged on top for the pin at 12:43. 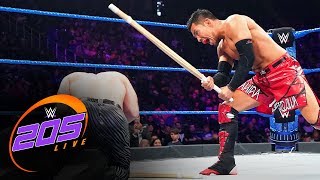 Kendrick and Kanellis hug to end the show. 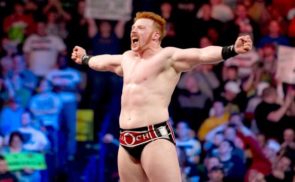 That’s No Shameful Thing. There Is A Good Reason To Believe Sheamus Could Be Back On WWE TV Soon.