They did say anywhere. Last month, WWE introduced the 24/7 Title, which was basically a modern version of the Hardcore Title. The idea is rather simple: the title can be defended anywhere and anytime, which can make for some rather interesting situations. So far R-Truth has dominated the title’s history, despite having a large group of challengers chasing him. One of them caught up to him on Sunday.

WWE has posted a video to their Twitter page of 24/7 Champion R-Truth and Carmella at a golf course. R-Truth was talking about how he needed some relaxation after everything that he had been dealing with since becoming champion when Jinder Mahal jumped him from behind. Mahal, in wrestling gear, rolled R-Truth up to win the title, only to be rolled up again to give R-Truth the title back seconds later. R-Truth then rode away on the back of the golf cart.

You knew something like this was coming. Check out the pair of title change:

Opinion: So this whole this is going to be an R-Truth title, at least for the time being right? It’s not like anyone else has held the title for more than a few minutes otherwise. While R-Truth is funny with the title, this is going to lose some of its charm in a hurry. It also doesn’t help that there are so many people who could use some kind of push but R-Truth is the only one benefiting at the moment.

What do you think of the championship? How long can it last? Let us know in the comments below.

How Bad Is It? Injury Update After A Saturday Night Scare. 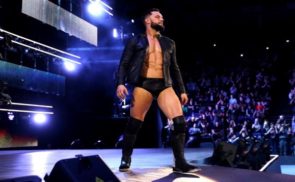