It’s the show after Payback and we get two big deals in one tonight. First of all, Roman Reigns and Paul Heyman are making their first comments since the revealed their alliance last week. In addition to that we have a four way match to determine the #1 contender for Reigns’ Clash Of Champions title defense. Let’s get to it.

We open with a recap of Roman Reigns revealing Paul Heyman as his new…whatever term they are using for him, and Reigns winning the Universal Title two nights later.

Here are Reigns and Heyman to get things going. Heyman says as soon as you thought he was out, Reigns pulled him back in. Reigns is the one corrupting him and pulled Heyman back in from the ocean of obscurity. Now he is back on the island of relevancy because they did the same thing to Heyman that they did to Reigns. What happened to the thank yous and the appreciation?

Reigns over delivered during his life threatening illness and no one offered him any thanks. When Reigns needed some time off, they made him give up his title. A Fiend or a monster isn’t born to reign. Imagine turning on Fox News and seeing an interview with a growling man as champion. Roman’s reign as your champion has always been defined as what WWE wants you to like: family, tradition and legacy. Tonight there is a four way to crown a new sacrificial lamb.

Heyman isn’t going to say their names because he’ll let Anderson Cooper and Carmella’s latest boyfriend handle that. Heyman is outside council to your Undisputed Universal Champion, Roman Reigns. Roman says he is a man of his word and did exactly what he said he was going to do: he signed the contract, wrecked the other two and left as Universal Heavyweight Champion. He’ll face whoever wins tonight and all he has to do is show up and win.

Post break Jey Uso comes up to Reigns in the back and congratulates him. Heyman leaves and Jey asks what the deal is with Heyman and Reigns. Roman says he’s got this and Jey accepts, even saying he’s got Reigns’ back if he ever needs it. Reigns leaves and seems rather distant, which Jey notices.

Otis runs Miz over to start and Tucker comes in for the standing double splash. Miz and Morrison are knocked to the floor and we take a break. Back with Tucker diving over both of them and making the tag off to Otis. House is cleaned but the Flying Chuck hits Otis to take him down. Morrison hits the Moonlight Drive on Tucker on the floor but Otis starts gyrating off Miz’s kicks. Miz is knocked down to set up the Caterpillar and a Vader Bomb  finishes Miz at 8:06.

Post match, Morrison steals the Money in the Bank briefcase and celebrates with it.

Big E. and Drew Gulak are having a birthday party for the returning Xavier Woods and tell Lucha House Party to stay away from the cake. Big E. is ready to become #1 contender but someone comes up to say Woods has arrived. With the cake in hand, Big E. goes out to find him but gets jumped by Sheamus, who takes him down with a Brogue Kick. White Noise onto the windshield of a car knocks Big E. cold.

Post break Big E. is injured and has to go to a local medical facility. Sheamus comes in and says that is tough to watch but he can’t take his eyes off of it. With Big E. being loaded up on the stretcher in the background, Kayla Braxton asks if Sheamus set this up because of the Payback loss. Sheamus claims self defense and thinks Big E. just got distracted by the idea of seeing Woods again. If you want to be Universal Champion, you need to be focused at all time. Now Sheamus has to go because he has a triple threat to get ready for.

Bayley and Sasha Banks are ready to win the Women’s Tag Team Titles back but Banks doesn’t like Bayley being asked about tapping out twice in a row. Banks talks about how great Bayley is and promises to get the titles back.

Adam Pearce says the four way is still on and the replacement will be named tonight. Heyman comes up and wants to talk to Pearce about something.

Jax and Baszler are defending and we get an inset promo from Shinsuke Nakamura and Cesaro, talking about how this is going to be a car crash. Cesaro calls out Nakamura for being insensitive after what happened to Big E. They raise a toast anyway. The champs are sent outside for double baseball slides but Bayley and Banks get caught. Despite them locking hands, the champs swing them into the barricade a few times as we take a break.

Back with Bayley in trouble as Banks seems rather concerned. Jax grabs a chinlock before it’s off to Baszler to crank Bayley’s arm back for a nasty visual. Bayley gets over for the tag to Banks and it’s a Backstabber into the running knees in the corner to Jax. The top rope Meteora gets two and everything breaks down. Jax is sent to the apron where Bayley hits a Stunner onto the middle rope so Bayley can hit a powerbomb to the floor. Bayley suplexes her way out of the Kirifuda Clutch and it’s time to beat on Jax in the corner.

The Backstabber hits Baszler and Bayley starts going up but Banks covers for two instead. Now Bayley can hit the elbow for two more but Banks’ running knees only hit the post. Back in and Baszler takes out the bad knee. A spinning toehold is countered into a small package for two but Baszler is right back up with a shot to knock Bayley off the apron. Baszler stomps at the knee and tries a Muta Lock, only to have Bayley come back in for the Bayley to Belly for the save.

Banks grabs the Bank Statement instead of tagging and it’s Jax coming in to break things up. Jax gets the tag and tries a Stretch Muffler but Banks reverses into a sunset flip for two. Bayley saves Sasha from a super Samoan drop and a double powerbomb hits Baszler. Jax hits a middle rope crossbody for the double pin to retain at 15:38.

Post break medics are checking on Banks…and Bayley kicks her in the head. Bayley sends her into the steps and then stomps the bad leg on the steps. Banks goes into the barricade and then back in to keep up the beating, including more kicks to the leg. Bayley yells at her a lot and then wraps a chair around the leg. Banks gets in some kicks but Bayley blasts her again and adds a bulldog driver. With Banks out cold, Bayley wraps the chair around Banks’ neck and Pillmanizes her, probably putting Banks out for a long time.

Post break Banks is taken away in an ambulance.

Hardy says all Sami had to do was ask for a title shot but Sami says it should have been Sami who was asking. Cue AJ Styles to say he’s back and healthy so Jeff says he’s ready to defend. AJ jumps Hardy and the fight is on with Sami joining in. AJ hits Hardy as well but Hardy gets back up, with AJ being sent outside. The Helluva Kick hits Hardy and Sami bails.

Jey Uso is replacing Big E. in the #1 contenders match.

Tucker can’t find Miz and Morrison to get the briefcase back. Otis is cool with it because he keeps the Money in the Bank contract in his mini lunch box. Tucker is happy but want to know what’s in the briefcase. As luck would have it, Morrison is ready to open the briefcase at that time and finds….a stapler, some Q-Tips and a sandwich.

Jey Uso thanks Roman for getting him in the match but Roman says it was Heyman’s doing. Reigns wants Jey to win one on his own and wishes him luck.

Riddle comes out for the main event and charges at Corbin’s throne on the stage to start the fight early. Sheamus and Jey come down and the brawl is on in the ring and on the floor. We take a break before the bell rings and come back with….the Firefly Fun House.

Bray knows that you are down in the dumps just like He is because He lost his favorite toy again. It’s cool though because next week a brand new friend is coming to the Fun House. BYE!

Alexa Bliss comes up to Nikki Cross in the back and doesn’t know what came over him. With Ramblin Rabbit in the background, Bliss hugs her and walks off.

Matt Riddle vs. King Corbin vs. Sheamus vs. Jey Uso

For the shot at Clash and we’re finally ready to go about ten minutes after Riddle’s entrance. It’s a brawl to start with Jey superkicking Corbin to the floor and Sheamus hitting a backbreaker on Riddle. Jey comes back in for the save but gets knocked down, leaving the big guys to brawl. Riddle gets in as well and it’s a double charge in the corner to Sheamus and Corbin.

They come back with the Irish Curse and Deep Six for a double two, followed by Sheamus running Corbin over. We take a break and come back with Sheamus hitting the forearms to Jey’s chest but Riddle is back up with strikes of his own. An exploder suplex into the Broton has Sheamus in trouble but he pulls Riddle into the Cloverleaf. Jey makes the save and hits some running Umaga Attacks to both of them in the corner.

Corbin gets in a cheap shot on Jey but Riddle and Sheamus throw Corbin over the barricade. Jey dives onto Sheamus and Riddle for the double knockdown but Corbin is back up to throw Uso into the video screens. The other three get back in and Sheamus Brogue Kicks Corbin. The Bro To Sleep sends Sheamus outside and it’s the Floating Bro to Corbin. Jey comes back in with the Superfly Splash to Riddle for the pin at 13:18.

Post match Jey says he made the family proud too and is ready to take Roman to the Uso Penitentiary. 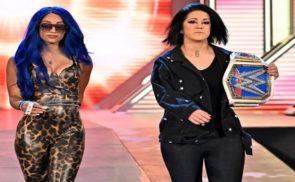