It’s the final Smackdown at the ThunderDome and that is a long time in the making. The big story coming into this week is Bayley blowing out her knee at the Performance Center, meaning she will be lucky to make it back to Wrestlemania. Other than that, it is time to see who else is in the men’s Money in the Bank ladder match. Let’s get to it.

We open with a recap of Roman Reigns vs. Edge.

Jimmy Uso tries to go into Reigns’ locker room but Paul Heyman stops him. Reigns has something special planned for Jimmy for later.

Here are Paul Heyman and Roman Reigns for a chat. After a long canned ROMAN SUCKS chant, Reigns talks about how he does not like Edge suggesting that he is in Reigns’ head. Reigns might have been a bit scared at Wrestlemania when he was in the crossface but then he stacked them and pinned them. They even printed a shirt up about it! Two weeks ago, Edge got to Reigns because he wasn’t focused. Reigns has some family stuff going on so let’s deal with that right now.

Cue Jimmy Uso, to say he tried to take care of Edge last week when Reigns was on vacation. Reigns asks when Jimmy got to make some decisions for them, but last week wasn’t a vacation. This brings out Jey Uso, to say Reigns needs to keep his head up while the brothers win the Tag Team Titles again. Reigns says Jey hears what he wants to hear it but Reigns wants all three of them to succeed. They need to do it together though and everyone hugs.

Baron Corbin talks about how he needs to win tonight because he has lost everything, from his crown to his car and maybe even his house. He has won Money in the Bank before and he can do it again.

Long video on Corbin losing everything to Nakamura.

Earlier today, Nakamura and Rick Boogz arrived in Corbin’s old Mercedes, which they bought at an auction.

Big E. (in a Bayley shirt) is on commentary, with his feet soaking of course. Corbin can’t handle Nakamura’s entrance and jumps him in the aisle as we take a break before the match. Joined in progress with Corbin hammering away but Nakamura sends him into the corner for the running knee to the ribs. The sliding knee gives Nakamura two but Corbin is right back with a half crab.

That’s broken up and they head outside, with Corbin dropping him onto the announcers’ table as we take a break. Back with Corbin grabbing Deep Six for two but Nakamura grabs a triangle choke. Corbin reaches the rope for the break but Kinshasa is cut off with a hard clothesline. Back up and Nakamura kicks him down, setting up Kinshasa for the pin at 10:59.

Here are Natalya and Tamina to answer a challenge from some new team in a non-title match.

Non-title and it might be Shotzi/Nox (in the tank), because the name shortening might have already started. Nox takes Natalya down to start and it’s off to Shotzi for an assisted cannonball. Tamina comes in to kick Shotzi down and knocks Nox off the apron. Nox comes in sans tag as everything breaks down. Tamina is sent outside but Natalya drops Nox as well. Shotzi hits a running clothesline to Natalya, setting up the Ball Pit for the pin at 3:18.

Edge is ready to call out Roman Reigns later tonight.

Here is Sonya Deville to announce Bayley’s replacement at Money in the Bank. First though, we see a clip from the injured Bayley, saying she will be back. Deville says that Bianca Belair will not be defending the Women’s Title at Money in the Bank, but rather next week in Houston. Her opponent will be……Carmella, who comes out to brag about how gorgeous she is.

Cue Liv Morgan to snap about how Deville is playing favorites with the choice, but Deville says Morgan is getting Carmella’s spot in Money in the Bank. That’s enough for Morgan so here is Bianca Belair to replace her. Belair isn’t sure if Bayley is telling the truth about her injury but Belair will be waiting to finish this when Bayley gets back. As for Carmella, she better be ready for next week.

Money in the Bank Qualifying Match: Cesaro vs. Seth Rollins

Kevin Owens is on commentary. Cesaro suplexes him down to start and then takes it to the mat with ease. A high crossbody gets two on Rollins but the threat of the Neutralizer sernds him outside for a bit of a fit. Rollins wrecks most of the announcers’ table to a deadpan reply from Owens.

We take a break and come back with Cesaro in trouble as Owens continues to not be impressed. Rollins sends him hard into the steps and takes it back inside to drop a knee for two. We hit the chinlock to stay on the neck, followed by a kick to the back of the head for two. Cesaro fights up again and hits the reverse Angle Slam for two before going up top. Rollins catches him on top and tries the superplex into the Falcon Arrow but Cesaro reverses into a crash down to the floor.

We take another break and come back with Cesaro not being able to get the Sharpshooter but pulling Rollins out of the corner instead (with the turnbuckle pad coming off in the process). The Neutralizer is countered into a hurricanrana into the exposed buckle for two, followed by a rollup with a grab of the rope for the same.

Rollins blasts him with a shot to the back of the head for two more and Cesaro is busted open. Cesaro is sent outside with Rollins ramming him into various things. That isn’t enough for the countout so Rollins hits a DDT onto the ramp for nine with Cesaro diving in to beat the count. The Stomp is countered into a rollup for two but Rollins kicks him in the face. The uppercut staggers Rollins, who is right back with the Stomp for the pin at 18:20.

The Usos go a-Edge hunting but don’t knock on his dressing room door so they can catch him by surprise. Post break, Jimmy goes through the door but there is no Edge.

Seth Rollins is VERY excited about beating Zazzaro but isn’t surprised because he is on another level. Rollins talks about his history with Reigns and promises to win, but Edge pops up behind him. Edge promises to call out Reigns right now and sneers at Rollins.

Chad Gable brags about Otis being a human wrecking ball. Otis, in a normal voice, promises to destroy anyone.

Here is Edge to promise to destroy anyone who gets in his way. We see Edge crossfacing Roman Reigns and Jimmy Uso, and now he wants Reigns out here right now. In the locker room, Reigns says he has this covered and wants the Usos to stay here. Reigns comes to the ring but the Usos follow him out. That isn’t happening though as Reigns says he has this before slowly getting in the ring.

The fight is on but here are the returning Mysterios to jump the Usos. Edge loads up the spear but Jey grabs his leg. Rey breaks that up and the Mysterios hit a double 619 to the Usos. The spear drops Jey as Roman leaves like he should be doing. Edge breaks off a piece of chair to crossface Jey and then does the same to Jimmy, holding his arm in place for at least the second time this week. Jey gets it again as Reigns walks off to end the show. 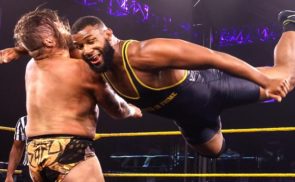