We’re getting closer to the Royal Rumble and things started to pick up a lot this week on Raw. Therefore, you can probably assume the same thing here because these shows tend to follow each other. I’m sure we’ll get more from Roman Reigns vs. King Corbin now that the Usos are back, because this feud just needs to keep going. Let’s get to it.

It’s MizTV to get things going. People have said Miz has changed since his issues with Bray Wyatt but last week was just a bad day. Sometimes people want to tell you to smile but he didn’t want to do that last week. He wants to apologize to Kofi Kingston for what he said last week but he has been going through a lot. One of the few bright spots has been the return of an old friend though, so here is the returning John Morrison as his guest.

We get a highlight package of Morrison’s time in WWE and he talks about his big comeback. He was promised new music, a new shirt, a team of pomeranians pulling him to the ring at the Royal Rumble (Morrison: “Small dogs only because there’s only one big dog around here.”), but he’s been doing some thinking. The more he thinks about last week, the more disappointed he is in the fans. Miz had one bad day and the fans say he sucks?

These people don’t know what it’s like to be in the ring but here’s New Day to interrupt. Big E. thinks Miz is such a bad actor that he couldn’t be cast as the back end of a centipede. With that image out of the way, Kofi talks about how Miz should have just said he had a bad day and it would have been so much better. Miz respects Kofi’s six month reign as WWE Champion but not the six seconds it took him to lose the title right back. Kofi says Miz is changing and he sucks….and that’s it in an abrupt ending as we need a commercial.

Kofi Kingston vs. The Miz

Morrison and big E. are on commentary. Feeling out process to start with Kofi dropkicking him into the corner before we go to a long look at the commentary table. Miz knees him in the ribs as Morrison asks why Kofi didn’t give Big E. a title shot during his six months as champion. Kofi elbows him in the face as Big E. explains that the team is a brotherhood and they were all World Champion at the same time. A suicide dive takes Miz out but he shoves Kofi into Big E. as we take a break.

Back with Kofi fighting out of a chinlock with Morrison and Big E. off commentary. Miz goes after the knee to cut Kofi off and hits some YES Kicks. The Skull Crushing Finale is blocked and Kofi gets two off the SOS. Miz charges into a kick to the face in the corner but kicks the knee out of the air and slaps on the Figure Four. With that broken up, Morrison dives onto Big E. and the distracted Kofi walks into the Skull Crushing Finale for the pin at 11:29.

It’s time for the Firefly Fun House with Bray saying he loves everyone here. That feels special but not everyone is worthy. He means Daniel Bryan because whatever the opposite of what love is is what HE feels about Bryan. Daniel has been naughty lately and he’s in a heap of trouble at the Royal Rumble.

First, the Fiend wanted him to remember, and we get some clips of Bryan’s time in the Wyatt Family, plus his rebellion. Then he wanted to change Bryan, with clips of the haircut. Now that Bryan wants the title, HE wants to destroy Bryan. Bray: “Bye! I love you! Not you Daniel!”

Sonya Deville is happy for a new year for Fire & Desire but Mandy Rose seems distracted. Sonya leaves so Mandy pulls out a box, which seems to be a gift.

Here’s Elias for a song. He sings about the Royal Rumble, including about how he’ll win and how much more interesting he is than Brock, mainly because he’s actually here.

Mandy, with the box, comes up to Heavy Machinery. She apologizes for letting Dolph stomp on his mom’s fruit cake (a line you will only hear in wrestling) and made him something to make up for it. It’s a cake that says I’m Sorry but she has to go have her match.

Bliss and Nikki Cross are both in the Rumble. They shove each other to start and Bliss doesn’t like it, earning Rose a slap to the face. Another slap puts Rose on the floor for a baseball slide but Sonya offers a distraction. Cross breaks that up but Mandy gets in a knee to the head for two. They trade kicks to the face and a double clothesline puts them both down. Bliss is up first with Insult To Injury….and here’s Heavy Machinery with the cake. The distraction lets Rose grab a rollup for the pin at 4:02.

Hold on though as Bayley pops up on screen to say Sasha is awol tonight and even a jarhead like Lacey can understand that. Bayley is here tonight because she has to be so Lacey talks about how she loves to be in the heartland. She wants a title match tonight but Bayley isn’t her kid and won’t be doing what Lacey says. Lacey goes to the back and gets jumped by Bayley, who says put on her mom jeans and go home. Referees break it up.

Bryan says Fiend wants a lot and Bryan does remember the Wyatt Family. He also remembers outsmarting them and Fiend must not be happy with that. Then Fiend wants him to change so Bryan feels more dangerous. The one thing Fiend can change about him is that he can’t be broken. Ramblin Rabbit pops up on screen behind him and offers to tell Bryan the secret to defeating the Fiend but Bray grabs him and says snitches get snitches. Bryan nods a bit.

Non-title and Nakamura has Sami Zayn and Cesaro with him. Nakamura avoids a charge in the corner to start and starts striking away but runs into a big boot. Now the running splash in the corner connects but Sami pulls Nakamura to the floor before a second can hit. A distraction lets Nakamura post Strowman and we take a break. Back with Nakamura kicking Strowman down for two and putting on the chinlock.

Another kick to the face looks to set up a middle rope shot to the head, only to have Strowman clothesline him out of the air. The forearm to the chest gets two but Nakamura hits a running dropkick. A running knee to the head connects for two more but Strowman is back with a spinebuster. Cesaro tries to bring in a chair and Nakamura tries to bring in the title but Strowman just powerslams him for the pin at 9:35.

Post match Strowman holds up the title but Sami runs in and takes it back.

Sheamus calls Shorty G. an example of everything wrong with Smackdown since he left. Small is something to be crushed and disposed of because size does matter. Sheamus wants to embrace chaos.

Bryan finds a present in his locker room. It’s a deformed Ramblin Rabbit, who has had half of his head ripped off.

Here’s Roman Reigns for a chat before the main event. He’s been dealing with King Corbin and his friends so Reigns knew he needed friends. This time he needed more though so he needed family. This is going to be his year and he’s going to win the Royal Rumble so he can move on and main event Wrestlemania for the fifth time. He’ll do it with the Usos by his side.

Cue the Usos to say they have this show on lockdown. Corbin disrespected the family with the dog food but this brings out Corbin and Ziggler to say the three of them are scared. Reigns would love to beat up Corbin twice in one night so they should fight twice at the Rumble. Corbin agrees and is now in the Rumble as well. The Usos hit big dives and the main event is next.

Jimmy shoulders Ziggler down to start and it’s a double elbow drop for two. Corbin comes in for a clothesline and Jimmy gets caught in the wrong corner. Some right hands in the corner stagger Corbin a bit and a jumping enziguri puts him down. Jimmy goes up but here’s the Revival to distract him, meaning Ziggler can send him into the barricade.

Cue Reigns to beat up the Revival and we take a break. Back with Jey hitting the running hip attack in the corner but diving onto Corbin, who pulls him out of the air. Corbin sends Jey into Reigns so Jimmy superkicks Ziggler to set up the Superfly Splash. Back up and Corbin gets speared down by Reigns for the DQ at 8:55.

Post match Robert Roode returns and hits the Glorious DDT on Reigns on the floor. The Usos get laid out as well and it’s a spinebuster/elbow drop to put Reigns through the table to end the show. Just in case you weren’t overwhelmed by the levels of boring in Corbin and Ziggler already, now Roode is back. 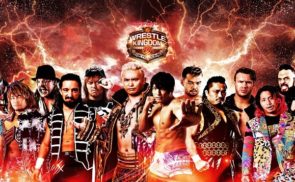