While it might not feel like it, this is the go home show for Wrestlemania. The show is again taped, and maybe now that we are only twenty two hours away from the start of the show, we can get some kind of information about the changed World Title match. I mean it’s not like it’s that important or anything. Let’s get to it.

Naomi vs. Lacey Evans vs. Tamina

Sasha Banks and Bayley are on commentary. Tamina cleans house to start and we take a very early break. Back with Tamina getting one on Naomi but Lacey comes back in to take over. The slingshot Bronco Buster connects as Sasha and Bayley no sell questions about turning on each other at Wrestlemania. Sasha gets up and sends Lacey into the steps, leaving Naomi to sunset flip Tamina for two. A Samoan drop gives Tamina two so Bayley offers a quick distraction, allowing Tamina to superkick Naomi for the pin at 8:24.

Result: Tamina b. Naomi and Lacey Evans – Superkick to Naomi (8:24)

Post match Bayley tries to make amends with Tamina and gets superkicked. Sasha tries the same and gets Samoan dropped.

Tucker is warming up when the circle of lights pops up. This time the words “THE TRUTH WILL BE TOLD” flashes up on screen.

Flair has the blue robe one more time and while I’m still a fan of the black and white one, I can’t help but smile at seeing the classic look again. Shawn shoulders him down to start and it’s clear that they’re going to have all the time they want here. They trade some hammerlocks with Shawn getting the better of it on the mat. That’s broken up as well and we get the first WOO.

The chops in the corner let Flair yell about Old Yeller but Shawn slaps him in the face and asks if that’s all he has. An exchange of chops in the corner goes to Flair (as it should) but Shawn elbows him in the jaw and goes up. This time Flair slams him off the top and goes up…..for a crossbody into a near fall! You would think that would get more of a reaction but he has to fail at an early Figure Four attempt.

Shawn kicks him to the floor and tries an Asai moonsault, which only hits the announcers’ table, with his ribs landing on the edge which doesn’t break (I’ve seen that many times and it draws a very real cringe). That’s only good for a nine count and Shawn can barely move because of the ribs. A belly to back suplex gives Flair two and he manages a delayed vertical for the same. Note: Charles Robinson (Little Naitch) is referee here and for some reason he’s in a Smackdown shirt. Yeah he’s a Smackdown referee, but you can’t just throw him in a Raw shirt for the occasion?

Flair’s neckbreaker gets two more but Shawn sends him outside. That means a moonsault to the floor which takes Flair out and bangs up the ribs even more. They chop it out back inside and it’s Shawn’s forearm into the nipup as the pace picks up a bit. A slam drops Flair and Shawn’s top rope elbow connects, meaning it’s time to Tune of the Band. Shawn can’t bring himself to do it though and Flair grabs the legs and slaps on the Figure Four in the middle of the ring.

The hold is turned over and they load up the bridge into the backslide….but Flair just can’t do it anymore so they go into a rollup instead. It’s time for the chop block and NOW the Figure Four is on for real. Shawn crawls to the rope so Flair stomps away some more until the referee drags him away. That’s enough of a delay for Shawn to hit Sweet Chin Music for a very close two and the fans go nuts on the kickout.

Shawn loads it up again but stops to tell Flair to get up. That means a low blow (again, you knew he was getting that in somehow) for two more and the fans really bought the near fall. To mix things up a bit, Shawn sweeps the legs and tries a reverse Figure Four (thank goodness it wasn’t a Sharpshooter) to send Flair bailing to the ropes this time.

A rollup with tights gets two and they chop it out from their knees. The chops bring them to their feet and Shawn hits another superkick to put Flair down. There’s no cover though as Shawn goes into the corner and Flair slowly gets up. Shawn says the now legendary I’m Sorry, I Love You and superkicks Flair one more time, this time for the pin at 20:34.

Post match Shawn leaves the ring and a crying Flair gets to his feet for one of the best standing ovations you’ll ever see. This is more than deserved and while he should have retired a long time ago (you could argue all the way back in the 90s), he was far from embarrassing himself and someone as influential, successful and downright talented as he was should absolutely get this kind of a sendoff. And for those who are wondering why, this was originally going to close the show but Flair refused and insisted it go in the middle.

We look back at Elias being attacked last week.

Goldberg is now defending against Braun Strowman. No reason is given and the match is just changed.

Otis tells Tucker to leave him a little piece of Dolph Ziggler. Tucker says he ran into Mandy Rose earlier and she asked about him. Otis gets a text and is rather happy before running off.

No Otis this time. Tucker runs him over to start and the fight is on in a hurry, including some kicks to Ziggler’s ribs. A quick shot puts Tucker down for the jumping elbow but he’s right back up with a big boot. Ziggler’s DDT out of the corner puts them both down and we take a break. Back with Tucker slugging away and knocking Ziggler outside. That means a ram into the barricade and a side slam gets two back inside. They head outside again and this time it’s a Zig Zag onto the steps for the DQ at 9:17.

Result: Tucker b. Dolph Ziggler via DQ when Ziggler sent Tucker into the steps (9:17)

Post match Ziggler loads up the steps but Mandy Rose and Sonya Deville appear to break it up with Otis making the real save. The Truth Will Be Heard appears again and this time we go to a control room. Someone whose face we can’t see says he told us the truth will be heard. He plays a video from Valentine’s Day showing Mandy talking to Sonya.

After Mandy leaves to do something, Sonya picks up Mandy’s phone and sends Otis a text, saying she’ll be late. We see Otis saying that sounds great and Sonya deletes both messages. Sonya then talks to Ziggler, saying both of them will get what they want. Back in the arena, Mandy walks away from Sonya. Otis chases Dolph out as well.

Cesaro and Drew Gulak are at ringside while Sami Zayn is on commentary. They fight over arm control to start until Bryan dropkicks him to the floor the running baseball slide sets up Bryan’s running knee from the apron and Nakamura is down. Back in and Bryan hits a running dropkick in the corner, only to get knocked off the middle rope. Nakamura’s middle rope knee to the chest gets two and the sliding German suplex in the corner takes us to a break.

Back with Bryan still in trouble as Nakamura kicks away at the chest. Bryan kicks away and goes for the arm, followed by even more kicks to stagger Nakamura again. The YES Lock is countered and Nakamura pulls him into a blocked cross armbreaker. That’s reverses into another armbreaker from Bryan (Sami: “HOW DID HE DO THAT???”) which is switched into the LeBell Lock. Cesaro runs in for the DQ at 11:39.

Video on the Fiend vs. John Cena.

Here’s Cena for the big closing segment. Cena thanks the fans for getting us here and now we are less than one day until Wrestlemania. The thing is, no one knows what is going to happen, including Bray Wyatt himself. See, no one, including Bray, will tell him what a Firefly Fun House match is. Fear can lead to panic and panic can lead to collapse. The Fiend feeds on fear and panic and here we are. Cena will not be afraid and the poor man’s Mr. Rogers isn’t scaring him.

Goldberg has shown how to beat the Fiend and now the Fiend has made this happen. Cena promises a beating but here are the Firefly Fun House characters, saying that after Fiend is done with Cena, he’ll play with them forever. They say forever over and over again until Ramblin Rabbit says he’s here. The lights go out and the Fiend appears in the crow’s nest. Bray himself pops up behind Cena to say let him in. The lights go out again and Cena is alone to end the show.

Results
Tamina b. Lacey Evans and Naomi – Superkick to Naomi
Tucker b. Dolph Ziggler via DQ when Ziggler slammed Tucker into the steps
Daniel Bryan b. Shinsuke Nakamura via DQ when Cesaro interfered 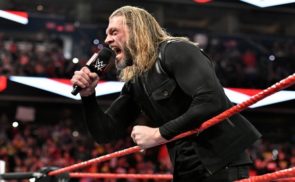 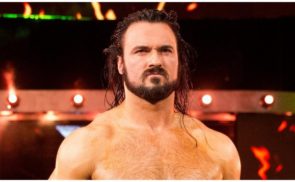