It’s off to a new location this week as the Daily’s Place parking lot has been taken over by Coronavirus patients. Therefore we’re off to some other place instead, likely for a bunch of taped shows. In theory we’re on the road towards Double Or Nothing but that depends on if the show actually takes place. Let’s get to it.

Cody and Tony welcome us to the show and get straight to the second half of the first round of the TNT Title tournament:

Orange Cassidy and Chuck Taylor are here as well and the wrestlers are acting as a rather small crowd again. Kenny headlocks him down to start but Trent is back up with some running knees to take Kenny down. Back up and Kenny chokes away in the corner before sending him outside outside for the big flip dive, taking out Cassidy and Taylor as well. A backbreaker plants Trent and another one gets two, followed by a hard whip into the corner to stay on the back.

Trent gets in a shot to the face though and knees away in the corner. We hear about the six star match from Revolution as Trent hammers him down to the floor. Kenny snaps off a German suplex on the floor and hits a brainbuster onto the knee. Trent is right back with a tornado DDT though and Kenny gets tied in the ropes. There’s the sliding German suplex to drop Omega again and we take a break.

Back with Trent hitting a piledriver for two but having another tornado DDT broken up. Kenny hits the snapdragon and a powerbomb sets up a V Trigger to put them both down. Omega heads up top but gets caught in a German superplex with Kenny landing HARD on his head. Thankfully he’s fine enough to hit another V Trigger and the One Winged Angel for the pin at 20:07.

We look back at last week’s Matt Hardy vs. Chris Jericho showdown.

Yes Jayy. Shida knees her down to start but misses a dropkick, allowing Jayy to hit her own running knee. Another knee gets Shida out of trouble but she has to glare at Britt Baker, allowing Jayy to get in a slap. A slap to the face annoys Shida, who is back with a forearm (Cody: “DANG!”) to drop her in a hurry. Jayy grabs a running blockbuster and ducks a crucifix, setting up some rollups for two each. Shida is done with this though and grabs a suplex, followed by a Falcon Arrow for the pin at 4:59.

We look at Jake Hager choking Jon Moxley out on Dark.

Hager calls Moxley stupid for thinking he can hang in a fight with him. Moxley says he’s the World Champion but he’s still miserable. Chris Jericho talks about how the Inner Circle is in this for themselves instead of the fans like Moxley talks about. Hager knows Moxley is beneath him because he is the undefeated MMA fighter who can choke Moxley out. Moxley likes the idea of a challenge because he lives for danger. Even Jericho says he wants Hager to win the World Title because it’s another title for the Inner Circle. In two weeks, it’s an empty arena no holds barred match for the title.

Jake Roberts talks about how Lance Archer is ready to destroy everything AEW has put together. After tonight, Jake and Archer want Cody, if his wife will let him face Archer that is.

Archer knocks out the tech guys on the way to the ring. A clothesline drops Stunt before the bell but Archer lets Stunt get in some free shots. Those earn him a bit shot to the face and Archer steps on his face for a bonus. A release suplex (cool) sends Stunt flying but he manages to get in a suicide dive. Some running dropkicks stagger Archer but he’s back with a heck of a Pounce. Archer gives him a hard chokeslam and the Blackout (a reverse Razor’s Edge flipped forward into a slam) finishes Stunt at 3:47.

Post break Archer chokeslams him off the apron and onto some people at ringside.

Brodie Lee is at a board room table talking to the Dark Order. He talks about how he was beaten and downtrodden but now he’s here. One of the masked men is told to stand next to him but he can’t remember what Brodie told him to say, which makes Lee rather mad. Another masked man yawns and Brodie yells at him as well, because it shows weakness.

That would be two masked men, who Colt refers to as 8 and 9. Marshall teases putting on the Dark Order mask but hits 8 instead, meaning the beating is on in a hurry. A backsplash gives Marshall two and Dustin’s powerslam gets the same. 9 gets Marshall into the corner for some chops but Marshall suplexes his way to freedom. It’s back to Dustin to clean house with a bulldog and powerslam, followed by a dive to the floor. Marshall hits his own dive, setting up the Dominator/sliding cutter combination for the pin on 8 at 4:09.

Post match here’s Brodie Lee to powerbomb 8 and glare at 9 before walking away.

Chris Jericho is in his hot tub with a little bit of the bubbly, talking about how today is a national holiday. It’s April Fool’s Day, which is held in honor of the Elite. You have Hangman Page hanging around with his horse, Nick Jackson with his new baby, Matt Hardy calling himself Dumba**-cus and the Tiger King himself, Cody.

Jericho hypes up WarGames but here’s Vanguard 1, with Jericho trying to say he’s sorry. Instead, he offers Vanguard 1 a spot in the Inner Circle, complete with what looks like a baby size shirt. Vanguard 1 flies away with the shirt so Jericho says release the hounds. Five dogs run out and give chase but they can’t fly, leaving Jericho to shout “I’M GONNA GET YOOOOOOOOOUUUUUUUUUU!!” It would take everything Jericho has to get over a feud with a drone and….he’s getting close.

Matt Jackson has set up a ring on Nick’s tennis court so Nick can get back in ring shape. Nick is getting ready but he isn’t sure when he’ll be ready to return.

Cody and Spears start things off with Shawn’s headlock working more than the average version. Darby comes in for an ax handle to the arm but hang on as Sammy needs to vlog during the match. He asks for a kiss from Brandi but she takes his camera away, allowing Darby to drive Sammy into the barricade. Cody and Darby tease double dives but Sammy and Shawn move out of the way as we take a break.

Back with Spears knocking Allin to the floor so Guevara can stomp away. The chinlock keeps Darby down but hold on as Sammy bets $50 that Shawn can’t suplex Darby for 10 seconds. Hold on though as Sammy wants to go double or nothing on a 15 second suplex. Sammy gets his money back so Spears has one more bet on a 20 second suplex. This time Darby slips out though, leaving Sammy to collect the money and Darby to collect the tag to Cody.

House is cleaned, including the snap powerslam for two on Sammy. The Cody Cutter gets two on Sammy and it’s a Figure Four to Spears. Sammy makes a fast save so Cody drops him with Cross Rhodes. Cody gets sent over the apron so everyone can get in a few shots (including some from Britt Baker’s shoe). Back from another break with Sammy choking Cody on the rope as Tony gets to plug JR’s new book. Cody fights away and hits a top rope moonsault on Spears, allowing the tag off to Darby.

Everything breaks down in a hurry as Allin cleans house, including a double Coffin Drop and a pair of low bridge; Spears sends a suicide dive into the barricade though and a dropkick to the back has Allin in trouble. Cody gets beaten up well, allowing Darby to climb up the huge pole for a Coffin drop onto both guys. Back in and Spears hits a frog splash on Cody but it’s chair time. Darby takes it away, only to get rolled up with tights to give Spears the pin at 21:30.

Post break Darby lays Cody out to end the show. 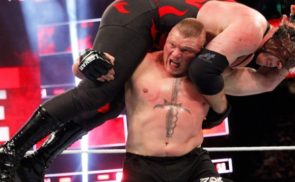