RUMOR: NXT UK May Be Back Soon

See you soon? There have been all kinds of changes made to the wrestling world due to the Coronavirus. That is the kind of thing that no one could have planned for and things have gone even worse than expected. Several wrestling promotions have not been able to do anything in several months now, though one place might be seeing the light at the end of the tunnel.

One of the biggest impacts on the WWE has been the lack of fans in the crowd for their events. The shows have still been taking place though and that is better than nothing. However, that is not the case for everything in WWE, including their NXT UK promotion. NXT UK has been left to air Best Of shows and clip shows for several months now. That time may be coming to an end though.

According to SportsKeeda’s Gary Cassidy, NXT UK is looking to run events at some point in the next two months. These shows would have no fans, as has been the case for all WWE shows since the pandemic began. There is no word on where the events would be taking place or if they would be one off events or full television tapings. NXT UK’s last original television show aired on April 2.

Last month, I reported on how talents were “working from home” and that there was a plan to tape content when safe to do so.

A couple of weeks ago, I was told there’s a tentative plan to tape empty arena shows within roughly two months…

The former – regarding Skull Sessions and acting seminars – was confirmed by Triple H in a media call.

The latter has been corroborated to an extent in interviews with talents.

I know a lot has changed this week. As far as I’m aware, that plan hasn’t.

There is a lot to be missed. Check out some of NXT UK’s better work:

Opinion: This is a situation where I will believe it when I see it. I could go for more NXT UK though, but it could be interesting with so many people either released or still under question over the SpeakOut allegations. Hopefully the show is back, but we could be in for more than a few delays before this actually happens. There is enough talent to make for some quality shows, but for now, the Best Of shows are going to be fine.

Will the shows return? Do you want them to? Let us know in the comments below. 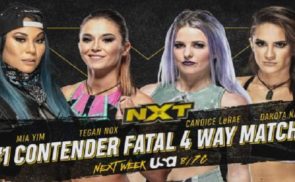