Well, maybe not. There are always going to be stories that come out which do not exactly line up with what is going on. Those can make for some interesting headlines but sometimes more information will come out later on which will invalidate everything that had been initially said. That was the case with a story that came out earlier in the day and does not seem to hold up.

There are very few wrestlers in WWE today as exciting as Ricochet. He can do things in the ring that almost no one else can come close to pulling off and that is the case almost every time he is in the ring. Ricochet was a heck of a signing for WWE and he has been rather successful both in NXT and on the main roster, which made news of him possibly leaving WWE a little more confusing. There is a reason for that.

On Thursday, a rumor came out that Ricochet may be leaving WWE when his contract expired in January. However, Ricochet has responded to the rumors, saying that they are completely untrue and talking about how he was not happy with the rumors starting in the first place. Ricochet said that he has never talked to anyone about leaving WWE and criticized websites for running a story without fact checking it.

But seriously, where the hell did these rumors start? I’ve never said once that I am leaving. To anyone! So for these “dirt sheets” out there.

Maybe facts check before you just blast some trash on your website for some clicks?

Ricochet can do some amazing things in the ring. Check out what made him famous:

Opinion: Fair enough. The story did seem to come out of absolutely nowhere and I’m rather relieved to know that there is nothing to it. Ricochet has been a lot of fun in WWE and I could go for seeing him around the company for a long time. It’s quite the relief to see him say this is not true, as Ricochet is one of the better things about WWE today. Hopefully he is around for a long time to come, which would be a rather nice thing to see.

What do you think of Ricochet? What will he do next in WWE? Let us know in the comments below. 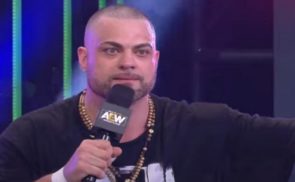