It’s the final show before things are back to normal around here and that could make for some interesting changes. This time around we are getting some special announcements which will most likely start off next week. I’m not sure what to expect here but we should be in for a lot of recapping. Let’s get to it.

Andy takes us right to the point by sending us to Sid Scala for an announcement.

And now, here’s William Regal with the rest of the story.

The tournament will take place under the British Rounds System, meaning six three minute rounds with twenty seconds in between rounds. Each match will be 2/3 falls and a pin, submission or countout ends a round. A DQ or Knockout ends the match immediately. If the rounds end, whomever is ahead advances.

We get three of the eight entrants, with each getting a quick highlight reel and soundbyte about why they are going to win.

Niven talks about knowing Ray for years now, including footage from ICW Fight Club. She was overconfident back then but then she started getting all the more nervous. Having Ray around made things that much easier but then things got a little more complicated because they started getting competitive. Ray did not make it as far in the Mae Young Classic as Niven but Ray won the Women’s Title first. Now Ray is the longest reigning Women’s Champion, which was always the plan.

Storm is challenging in an I Quit match. They slug it out to start and head outside with Storm sending her into various things. Back in and Storm Zero is blocked so Storm goes with something like an STF instead. Ray makes the rope but since that means nothing, she keeps crawling until Storm has to let it go. Ray bends Storm’s neck around the ropes and pulls the hair, setting up a Gory Special for a smart change of pace from her norm.

That’s broken up so Storm takes it to the floor and loads up a table. It takes Storm too long to go up top though and Ray catches her on the ropes. Not that it matters as Storm knocks her off and hits a splash through the table (nearly covering before catching herself). Storm Zero on the apron is broken up and a hanging DDT off the apron plants Storm again, this time with a heck of a thud.

Ray busts out the athletic tape and ties Storm’s hands behind her back so the beating can really begin. It’s chair time with Storm’s head being put through the open chair for a superkick. Ray drives the chair into Storm’s neck but she still won’t quit, meaning it’s time to wrap the chair around her neck. Instead of stomping though, Ray stands on the chair. Sid Scala and Piper Niven come out as Ray PILLMANIZES HER NECK. That’s not enough so Ray goes up again, which is enough to make Storm give up at 12:51.

We see a Network Exclusive where Niven helps Storm to the back.

Ray talks about Niven’s big heart being easy to use against her.

Niven talks about being made to feel like less of a person because of her size and that’s not happening.

Gallus is ready to get back in the ring so next week, we’ll see which team wants to come get it.

We get a four way Zoom chat with Andy Shepherd, William Regal, Robbie Brookside and Drew McIntyre talking about how much they like the tournament format. McIntyre grew up in modern British wrestling but loved the round format when he got the chance. Regal and Brookside talk about how different it is and how the matches will be like watching chess. The participants can’t prepare enough because they have to start again every single round.

McIntyre advises tapping if you have to and points at his own head. Maybe he would like to win that cup one day too, suggesting that it will be defended. Everyone gets in one more piece of advice, with McIntyre and Brookside saying be ready and Regal quoting Karl Gotch by saying that conditioning is your best weapon.

Next week: Amir Jordan/Kenny Williams vs. Gallus in a non-title match.

Non-title. Trent dives on him to start and sends Walter into the barricade before the bell. They get inside for the first time to officially start but Trent sends him right back out for a baseball slide. Walter is back up and tries the powerbomb but gets backdropped on the floor instead.

Back in and Seven hammers away until Walter snaps off a German suplex. Seven’s chop to the chest just annoys Walter, who slams Seven right back down. The half crab sends Seven bailing to the rope as Walter is looking disgusted at him for not quitting. A missed big boot in the corner lets Seven chop him in the back of the neck, followed by a clothesline.

More chops annoy Walter, so he knocks Seven down again. Seven is all but out on his feet but manages a backfist to the face to put Walter on the floor. Walter tries to come back in on the top so Seven chops him even more, setting up a top rope superplex for two. They head outside again with Walter hitting a big boot and this time the apron powerbomb connects.

We get a video on the big matches coming up when NXT UK returns to end the show. 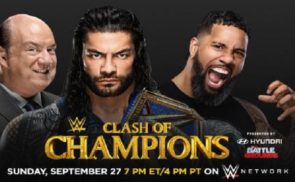 Miro Day In AEW: What Happens Next?