A little over a month ago, WWE mentioned that there would be a new stable debuting on Monday Night Raw. That got some interests, including my own, up, as that isn’t the kind of thing that WWE tends to announce in advance. WWE had been having issues with their television ratings and audience for a long time and it was clear that they needed something to help boost them up. I was intrigued, and it has pretty much been all downhill from that point on.

The group was a bunch of masked people jumping around in the parking lot and blowing up an electric generator. There was no name for the team, no members announced, and nothing inside the Performance Center. It wasn’t exactly clear why the team was announced in advance, but it wound up being a mistake, as the group wasn’t supposed to be advertised. If that didn’t tell you that we were in trouble, I’m not sure what else was going to.

We would soon find out that the team was called Retribution and that they wanted to make things right in WWE because they felt they had been wronged. The full body coverings and near rioting style behavior felt ripped from the current headlines, which made people wonder where in the world this was going, but also wonder how bad it could get given how things have tended to go in WWE before.

A few weeks went by and Retribution kept breaking various things, including some people as they invaded matches in the arena. At one point they wrecked the ring and the arena itself, breaking the ropes and spray painting a lot of things around ringside. Now this was around the time that WWE was setting up to move into the Thunder Dome, making the timing perfect. This renegade group has destroyed the Performance Center so WWE is going to move into this new, huge facility and be ready for them the next time they come. What a perfect way to set things up for the future and you already have everything in place!

It was so simple back then:

And of course not, as the arena was perfectly fine for Monday Night Raw (and even the 205 Live that came after SmackDown, as they don’t even pretend that they’re after each other these days) three days later, with time to spare before they moved to the Thunder Dome anyway. Oh but don’t worry, because Retribution broke up a Big E. vs. John Morrison match the following week on SmackDown….and then it took place later in the night anyway. However, during the match, Retribution attacked backstage, hurting people and breaking even more stuff. Surely this would change things!

The following week on Monday Night Raw, Retribution messed with some video. Yeah that’s it. They messed with some video, the locker room got in an argument over who should lead the fight against them, and then nothing else happened outside of some talk about them and a video recap of their actions.

Then they showed up on the first SmackDown in the Thunder Dome to confront Vince McMahon and I’m not even going to bother pretending this time. The roster came out and chased them off, which was their last appearance on SmackDown as they became Monday Night Raw exclusives. They weren’t at Summerslam or Payback, but they did beat up the Mysterios and Andrade, Zelina Vega and Angel Garza. That brings us to this week and the next nail in the coffin.

During this week’s Monday Night Raw, Retribution interrupted a Nia Jax vs. Riott Squad match and appeared on the Titantron with their first official statement. They talked about wanting to destroy WWE because the company had disowned them. While WWE grows they are left to feast on scraps so the locusts are here to feed on everyone and their darkness will seep into us all.

But it got more complicated:

That’s the history of Retribution so far and I think you can see why it hasn’t taken off yet. As you can see here, their biggest problem is simple: they haven’t done anything important. Yeah they broke some stuff. Did that really change the show? Other than that one weird show where things were glitching, it has just turned into the lights dim as their version of theme music. They broke up the Mysterios vs. Seth Rollins/Murphy and Big E. vs. Morrison. Both matches were made up, with one of them getting a pay per view slot and neither having any major fallout with Retribution.

Flash back with me to 2010 and the Nexus (yes, the Nexus was ten years ago). The team came in with a big splash when they destroyed everything at ringside and beat up a bunch of people (even going mega serious by using a necktie), including John Cena. The team was someone to be reckoned with right off the bat and they kept doing it over and over on every show.

Then things kept going and Nexus started talking and getting in the ring. You knew what their point was, you knew who you were watching, you could hear them speak, and you could see them attacking people. Their leader, Wade Barrett, even had a WWE Title shot in his back pocket so you knew things were about to get serious as the team was about to take over the company.

But then…they didn’t. Nexus lost their big elimination match at Summerslam but did come back and force John Cena to join. Barrett did beat the WWE Champion Randy Orton at Bragging Rights, albeit by DQ, even with Cena as guest referee. Cena was then fired for not helping Barrett win the title at Survivor Series, only to be back on Monday Night Raw THE NEXT NIGHT. Cena then beat Barrett at Tables, Ladders and Chairs to more or less end the team for good (ignoring all of the New Nexus stuff).

Nexus failed because in the entirety of their run, they only managed a few Tag Team Titles. Other than that they talked a big game but ultimately they failed because they never actually did anything important. It was Barrett and a bunch of lackeys who rarely won anything important and were defeated in a few months. Once it was clear that they weren’t taking over the company or doing anything that mattered, interest went away in a hurry.

And now they do this:

Is any of this sounding familiar? Nexus came in with a whimper, didn’t do much of note, and has been little more than a nuisance in their six weeks of existence. We still know nothing about them, other than they know how to do the same “WE’RE GOING TO DESTROY YOU” promo that has been done a dozen times over the years with very little actually changing. The team isn’t dead in the water just yet, but they have a very long climb and they’re starting in loose rocks.

Retribution is a cool idea. A group of wrestlers tying into current headlines (as Cole once mentioned on SmackDown) and with the ability to hide in plain sight because it could be anyone? That has potential, but that’s all it has been so far. The team has yet to do anything important and that isn’t going to help them in the long run. Maybe things can get better, but if they knew how to do this, maybe the company wouldn’t need to be fixed in the first place.

WWE Seemingly Cracking Down On Superstars’ Outside Ventures 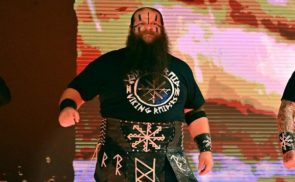