That’s bad to hear. Injuries can be some of the scariest things in all of wrestling and the neck is one of the worst places that can be damaged. That is the sort of injury that can end a career and they can seemingly come out of nowhere. Like any other injury, it can happen in a flash and that was the case this week on Monday Night Raw. Now we know a bit more about it and the results aren’t great.

This week on Monday Night Raw, Ivar of the Viking Raiders dove to the floor during an eight man tag. Upon landing, Ivar immediately made the X sign, signaling that he had been hurt. He was taken away on a stretcher after the match and was later diagnosed with a neck injury. The tentative diagnosis was a stinger but there was no timetable given on his return, though now we have some bad news.

According to Wrestling Observer Radio, Ivar’s injury is considered significant though it is currently unknown if he will need surgery. The initial thought of a stinger seems to be incorrect and the injury is not seen as something that he will be back from in a few weeks. There is no diagnosis on his recovery time, which will depend on whether or not he needs surgery.

Ivar is a rather unique star. Check out what he can do when he is healthy:

Opinion: That’s not good to hear under any circumstances and I’m not sure what it is going to mean long term. No matter what you think of him, you never want to see someone go on the shelf for any amount of time, especially over something as serious as a neck injury. A surgery could put him on the shelf for a very long time, if not permanently. Hopefully things are better than they seem, because this does not sound good.

What does this mean for Ivar? What will happen to Erik? Let us know in the comments below. 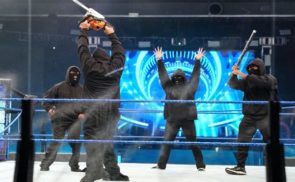