It’s title week here as Walter will be defending the United Kingdom Title against Heritage Cup holder A Kid. This isn’t the kind of match that they can do very often but for a one off special, we could be in for something very good. Other than that, it can probably be anyone’s guess around here. Let’s get to it.

We open with a recap of A Kid winning the Heritage Cup and wanting the best, so he challenged Walter for the UK Title. Walter finds this to be rather stupid.

Harvey is better known as Sha Samuels. Harvey tells him to bring it and catches Coffey’s running crossbody. With that not working, Coffey hits him in the face and nails a clothesline to the floor. Hold on though as Harvey grabs the mic and says he isn’t here to be Ed Harvey, because everyone knows he is Sha Samuels. Back in and Samuels hammers away with forearms before starting on the arm.

Coffey’s rollup gets two but Samuels kicks him into the corner. There’s a kick to Coffey’s back and we hit the chinlock. Coffey fights up and hits a backdrop, followed by an overhead belly to belly. The slugout goes to Coffey but Samuels pulls Coffey’s spinning middle rope crossbody out of the air. Coffey flips out of a sleeper and the high crossbody gives him two. Samuels is sent hard into the corner and All The Best For The Bells finishes for Coffey at 6:40.

Rampage Brown was lifting earlier when Dave Mastiff showed up to lift the same weight and say that Brown needed a challenge. Brown seems intrigued.

Gradwell rants about Bate becoming a yogurt living freak during his entrance. Bate shrugs off an armbar attempt and takes him down into a rollup for two. A running crossbody gets the same and there’s an armdrag into an armbar to put Gradwell down for a bit. That’s broken up and Gradwell hammers away, with a big right hand getting two.

The nerve hold goes on for a bit before Gradwell just rips at his face for a change. Bate’s sunset flip is broken up with a grab of the ear but Bate slugs away. A suplex sends Gradwell flying and the running shooting star press gets two. The Tyler Driver 97 is broken up and Gradwell blasts him with a clothesline. Bate shrugs it off and hits the Tyler Driver 97 for the pin at 7:23.

Ashton Smith and Oliver Carter are told about the four way #1 contenders match and seem rather pleased.

Ilja Dragunov comes up to Jack Starz and issues a friendly challenge, which Starz happily accepts.

Here are Jinny and Joseph Conners for a chat. Jinny brags about being the new #1 contender and says that Conners deserves a bit of credit. Why are they working together? In short, because Jinny has money. Anyway, Jinny is going to become champion next week so here’s Kay Lee Ray to interrupt. They argue over which of the two is championship material, with Jinny saying she will reign next week.

Eddie Dennis talks about his issues with Flash Morgan Webster and Mark Andrews, who now have to deal with the Hunt. Dennis seems to like the sound of that and the Hunt agrees.

Only Walter’s title is on the line so we’re under regular rules. Kid circles around and tries some kicks at the leg but Walter takes him down by the leg instead. Back up and Kid manages to drive him into the corner for a chop and things get a bit more serious. A headlock takeover has Kid down again but he headlocks his way to freedom. More kicks to the leg have Walter limping a bit and Kid pops in a few shots to the chest as well.

Walter’s arm is tied over the rope as some frustration is setting in. Kid actually kicks him down and hits a few kicks to the face, which make Walter growl at him. The huge chop cuts Kid off but the leg gives out and Walter falls as well. Walter slaps on a crossface before switching to a neck crank as the size is giving Kid trouble. Kid tries to fight back so Walter lays him on the top and hits a loud chop. The sleeper on the rope is countered into a dragon screw legwhip over the apron and Walter is down again.

More strikes to the back just make Walter hit him in the face before a shotgun dropkick just crushes Kid. The powerbomb (with Walter only bridging with one leg) connects for two and Walter tells him to bring it. The big chop is countered into a Crossface but Walter takes him outside for an apron powerbomb. Back in and Walter’s sleeper doesn’t work so he just blasts Kid with a pair of clotheslines to retain at 13:51.

Walter gives Kid a respectful look to end the show.

Results
Joe Coffey b. Sha Samuels – All The Best For The Bells
Tyler Bate b. Sam Gradwell – Tyler Driver 97
Walter b. A Kid – Lariat 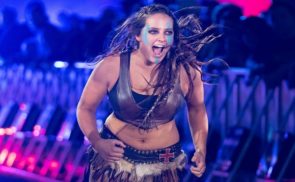