We’re a little over a month away from Takeover and that means it is time to start putting things together. Last week’s show featured a stacked card with Finn Balor retaining the NXT Title over Kyle O’Reilly, meaning that he is going to need a new #1 contender. This week is also going to focus on the Dusty Rhodes Tag Team Classic. Let’s get to it.

We open with a recap of last week’s show and a quick look at the Dusty Classic, with three first round matches tonight.

Candice has Indi Hartwell with her. Shotzi ducks a kick to start and shrugs off a neckbreaker, allowing her to go up top. The high crossbody gets two on Candice and it’s time to work on the arm. The armbar sends Candice bailing to the ropes so Shotzi goes after the other arm for a change. This time they go to the apron with Shotzi dropping her onto the steps but managing to avoid getting tossed into the barricade ala the battle royal from a few months ago.

An Indi distraction lets Candice hit a springboard spinning crossbody to the floor and we take a break. Back with Shotzi winning a slugout and nailing the running reverse Cannonball against the ropes. They go to the apron again with Shotzi hitting a DDT and then diving onto Indi and Candice at the same time. Back in and Candice manages a dropkick into the corner into a low superkick for two. Blackheart grabs another DDT but gets distracted by Indi, setting up Mrs. LeRae’s Wild Ride for the pin at 11:22.

Pete Dunne, Oney Lorcan and Danny Burch arrive, which seems to be a surprise.

Here’s Finn Balor for a chat. Balor says this is the day that he’s still the champ. Kyle O’Reilly again showed that he was great but he isn’t on Balor’s level. O’Reilly stepped up and got put down, because now he he is the one eating through a straw. Whoever is coming next better understand that they don’t make the cloth he is cut from anymore.

Cue Pete Dunne and company, with Dunne saying that he knew it would come down to these two to be the face of British wrestling. They were always going to go one on one so Balor tries to start fast. The beatdown gets the better of him through with Dunne taking him down by the arm. O’Reilly runs in for the save but it takes Adam Cole and Roderick Strong to chase the villains off. Balor has an awkward but seemingly respectful staredown with O’Reilly before leaving.

Johnny Gargano is ready to take out Dexter Lumis and then he’ll beat Kushida too….but here is Austin Theory with some of Lumis’ drawings of the two of them. Gargano doesn’t handle things well.

Before the match, Zack Gibson does his usual stuff, saying this is going to be their year. William Regal pops up on the screen to say the tournament is on and we’re ready to go. Gibson drives Martel into the corner so it’s off to Parker, who tries some trash talk. That earns him a beating into the corner so Drake can take him down with a headlock. Parker uses the hair to pull him down and stomp away, with Gibson getting things out to the floor.

An EVER-RISE RULES shout has Drake ready to kill him so Gibson calms things down. Drake fights up again and drops Parker, before throwing in a shot to Martel on the apron. Gibson comes back in for a front facelock and a belly to back slam. A half crab is blocked with some kicks to the face so Drake comes back in for a running elbow in the corner. There’s a spinwheel kick to give Drake two and he grabs the wristlock to cut off a near hot tag attempt.

Parker finally manages to drag Drake over for the hot tag to Martel, who immediately cleans house. There’s a suplex to Drake followed by a running clothesline and it’s already back to Parker. The Sweet Taste is broken up by Gibson and Drake hits a dropkick to Martel. The Ticket to Mayhem sends the Veterans on at 7:58.

Raquel Gonzalez talks about how important last week’s win was for her because just one year ago, Rhea Ripley was the chosen one. She is looking forward to the division and the Women’s Title because she is the baddest b**** around.

Shotzi Blackheart isn’t happy but she’s ready to win the Dusty Classic and beat Candice up on the way. She needs a partner and it needs to be someone she went to war with. Cue Ember Moon and the team is formed in a hurry.

Non-title and Gargano has Austin Theory with him. The bell rings and Gargano rips up the picture Lumis drew. That earns him a boot to the face and some right hands from Lumis, who does not appreciate the disrespect. Gargano misses the rolling kick to the head so Lumis is right there to stare at him. They head outside with Lumis ducking the running kick and nipping up to freak Gargano out.

Back in and Lumis gets caught on top but a superplex attempt is cut off by a series of headbutts. Lumis shoves him off the top but misses a Swanton as we take a break. We come back with Gargano in control and driving in knees to the back. Lumis manages a spinebuster though and the comeback is on with some right hands to the face. A slingshot suplex into a legdrop gives Lumis two but Gargano’s crucifix gets the same. The low superkick gets two more and it’s time for a slugout. Lumis has to deal with Theory and even Silences him, but Gargano uses the distraction to grab a rollup pin at 11:12.

Post match the beatdown stays on with Gargano grabbing a chair. Kushida runs in for the save and makes Gargano tap with the Hoverboard Lock. Kushida hands him the title and poses for a good visual.

Pete Dunne, Oney Lorcan and Danny Burch are ready to take out the Undisputed Era.

Timothy Thatcher and Tommaso Ciampa have a sitdown interview with Wade Barrett. Thatcher is cleared for the Fight Pit so we’ll do that next week. Ciampa challenged him to this because he wanted to change the culture but Thatcher says Ciampa doesn’t know what he’s getting into. Thatcher talks about Ciampa interrupting Thatcher’s students but Ciampa calls him a piece of garbage as a teacher. Ciampa is ready to change things in the Fight Pit and he’ll see if he still has it.

The Undisputed Era is ready to end Lorcan and Burch. They respect Breezango, but the two of them are in the Era’s way.

MSK is……Nash Carter/Wes Lee, better known as the former Rascalz. Carter (formerly Zachary Wentz) starts things off with Atlas and they go to the mat, only to pop up for a standoff. Atlas’ armbar doesn’t last long so Carter starts flipping around, setting up a jumping back elbow for one. Scott comes in and the flipping around is on, setting up Carter’s springboard corkscrew spinning crossbody.

Lee (formerly Dezmond Xavier) comes in to work on the arm a bit more. Scott takes him into the corner though and Atlas gets in a knee to the ribs. A low bridge from the apron puts Lee on the floor and Atlas takes him down. Carter goes over for the save and Lee adds the flip dive. Vic calls them some rascals and we take a break. Back with Scott having to block a hot tag attempt, meaning Carter gets over to Lee for the tag a few seconds later.

Atlas gets knocked down so the push moonsault can connect for two as Atlas makes the save. This time it’s Lee getting caught in the corner so Atlas can kick him in the head. Scott’s 450 gets two with Carter having to dive in for the save. Carter hits a big dive onto Atlas on the floor but pops back up in the corner to get the tag from Lee. With Atlas down, it’s a modified Hart Attack with Lee hitting a running Blockbuster into the spinebuster to finish Scott at 11:54.

Here are the first four teams in the Women’s Dusty Classic:

More teams to be announced and the first match is next week.

Video on Boa/Xia Li and their mystery master.

Scarlett, with Karrion Kross, uses Tarot cards to say things are about to get bad, especially for Finn Balor.

The entrance takes three times longer than the match, as Li finishes with the spinning kick to the face in 22 seconds.

Post match Li ties her in the ropes and beats her up even more, much to the master’s approval.

Kacy Catanzaro and Kayden Carter are ready to win their first round match over Mercedes Martinez and Toni Storm. They’re used to being overlooked though and beg everyone to do just that.

Isaiah Scott and Jake Atlas had to be separated. Bronson Reed handles the separating and Scott doesn’t seem to like that.

Next week: more first round matches, plus the Fight Pit.

Adam Cole/Roderick Strong for the Era here with Kyle O’Reilly in their corner. Breeze headlocks Cole to start and shoulders him down, but both of them try superkicks to no avail. They go with another grapple off to the mat with neither being able to get anywhere. Fandango and Strong come in with Strong grabbing an armbar to take over. Fandango gets in his own armbar as they’re completely even so far. A spinwheel kick gives Fandango two and we go to a break.

Back with Cole kicking Breeze in the head but getting sent outside before the hot tag. Breeze’s dive is cut off with a kick to the head, which is enough for the double tag to Strong and Fandango. Strong slams Breeze onto Fandango for two and it’s back to Cole, who misses the Last Shot. Breeze hits a Backstabber for two on Cole and knocks Strong to the floor. That means a backbreaker/slingshot elbow combination can get two on Cole.

Strong is back in as everything breaks down, meaning everyone can kick someone in the face for the four way knockdown. Cue Lorcan/Burch/Dunne to go after O’Reilly but Finn Balor runs in for the save before the jaw can be crushed again. That doesn’t matter though as Dunne knees O’Reilly in the jaw and Balor’s bad arm is sent into various things. Cole is distracted and walks into a superkick but Strong makes the save this time. The Panama Sunrise is countered but Cole superkicks Fandango out of the air for the pin at 11:57.

Dunne and company smirk from the stage to end the show as the Era checks on O’Reilly’s injured jaw. 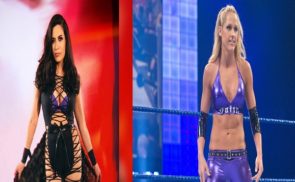 WWE Yelled At Wrestlers For A Match Being “Too Good”