I’m almost scared for this one, as I don’t know if NXT can pull off the same magic without the fans. It doesn’t help that the show has been a lot weaker since it moved to two hours, but you never bet against Takeover because the show has a pretty outstanding record. Tonight’s main event seems to be another cinematic match between NXT Champion Adam Cole and Velveteen Dream so let’s get to it.

The opening video is a pure nostalgia trip, with an NXT version of the old “revolutionary force in sports entertainment” intro, Todd Pettengill running down the card, and one lucky winner…..not winning a house tonight.

An altered version of the old house set is here too, with Code Orange performing the opening song.

LeRae tags Gonzalez in to hide from Yim, who is game to go after Gonzalez instead. Kai comes in so Mia brings in Nox for the revenge. Nox slugs away in the corner and hands it off to Blackheart for some kicks to the face. Kai gets in her own kick for two though and it’s back to LeRae, who misses the backsplash. Gonzalez kicks LeRae by mistake and it’s time to go outside for the parade of dives.

Back in and Shotzi runs LeRae over for two, followed by Cattle Mutilation. Kai makes the save and then distracts the referee so Gonzalez can get in her own clothesline. It’s Shotzi staying in trouble but Gonzalez misses a running boot in the corner. Mia gets the hot tag and comes in to clean house until a double knockdown puts her and LeRae down. Nox comes in to beat on Gonzalez, who comes back with a powerbomb for two. Yim and LeRae fight to the floor and then into the garage, leaving us two on two. Kai kicks Gonzalez by mistake and a double dropkick puts Gonzalez on the floor. The Shiniest Wizard finishes Kai at 9:52.

We recap Damian Priest vs. Finn Balor. Priest wanted to make a name for himself and attacked Balor, who wasn’t going to stand for that. It’s time for a showdown.

Balor dropkicks him in the corner before the bell and goes after the knee to take the big man down. They head outside with Balor going shoulder first into the steps and then back first onto the apron. The forearms don’t do much for Balor as Priest plants him with a lifting Downward Spiral. Priest stomps Balor down in the corner for one, meaning it’s off to the chinlock.

Balor fights up and sends him to the apron for the dropkick into the barricade. Some hard stomps against the barricade keep Priest in trouble but Priest is back in with a clothesline to cut off the dive. A series of strikes has Balor in trouble so he hits a fast Pele kick for two. Priest knocks him back to the floor and hits a Razor’s Edge onto the apron for two of his own. Back in and Priest hits some running elbows in the corner but Balor is back with the Sling Blade to break up the trio.

Priest kicks him in the face again, only to have Balor counter again. The Coup de Grace is countered into a sitout chokeslam for two and Priest tells the referee he’s not stopping this. A Razor’s Edge off the apron onto the steps is broken up so Balor forearms him off the apron and onto the steps instead. Back in and the top rope double stomp to the back sets up the Coup de Grace finishes Priest at 12:37.

We recap Johnny Gargano vs. Keith Lee for the North American Title. Gargano and Candice LeRae aren’t happy with how they’ve been treated around here so it’s time to do things their way. This includes defeating Lee to become North American Champion, so Lee and Mia Yim mocked their big proclamation. Gargano attacked Lee’s eyes with his car key and then crushed Lee’s hands to even the odds a bit coming into this one.

Gargano is challenging and has the key in his trunks. Lee has a Black Lives Matter vest and shoves Gargano around a few times to start. The spinning kick to the face misses and Gargano is terrified. A quick chase lets Gargano get in a dropkick through the ropes, but the suicide dive is pulled out of the air. Gargano can’t send the bad hand into the steps but winds up running towards the set door.

Since that’s not a real door, Lee catches up to him for the Grizzly Magnum chop. They head back inside with Gargano stomping on the hand so Lee knocks him away for a short breather. Gargano is right back with left hands in the corner before shoving Lee’s face against the buckle.

The band hand is bent around the turnbuckle before cranking on the arm even more. The slingshot spear is cut off by an enziguri to give Lee two but he can’t hit a powerbomb. Gargano’s clotheslines don’t work so Lee shows him how it’s done for two more. Lee wants to see Gargano’s heart and loads up another powerbomb.

This time Gargano kicks him in the head and rolls into a sunset flip for two more. Gargano knocks him outside and it’s a suicide tornado DDT to knock Lee silly on the floor. The count is broken up at nine so Lee Pounces Gargano through the Plexiglas. Lee pulls what used to be Gargano back in but here’s Candice for a distraction.

Mia Yim comes out to take care of her but the distraction lets Gargano use the key on Lee’s eye. There’s the slingshot DDT for two on Lee, followed by a low superkick for the same. Gargano hits two more of them for the same but talks too much trash, allowing Lee to hit the Spirit Bomb. The Big Bang Catastrophe retains the title at 20:38.

We recap Adam Cole vs. Velveteen Dream. Cole has been champion for a year but Dream had him beaten until the Undisputed Era interfered. Tonight, they’re fighting in a Backlot Brawl, meaning in a ring behind the building with fans in cars around the ring.

Anything goes, Cole is defending and drives up to the ring in a really big truck, while Dream is in a Lamborghini and dressed as Negan from Walking Dead (complete with Lucille the bat). Dream gets in some early near falls but Cole catches him with a kick to the face. Cole grabs the belt and gets in another car but Dream is there to beat on it with the bat.

They slug it out again and here’s an Uber, with the two of them literally fighting through it. The Uber pulls away and they fight up what looks like the street in front of an apartment building. Cole gets away and finds a fire extinguisher to blind Dream. Some uppercuts knock Dream back to ringside and Cole forearms him up against a truck. Dream manages to post him but Cole rolls away and asks for time out.

A dive off the top is superkicked out of the air to put Dream down again. Dream does the same to Cole though and the champ is out on the ground. Cole gets planted onto the hood of a car and Dream busts out a ladder. The Purple Rainmaker from the ladder is loaded up but here’s the rest of the Undisputed Era in another car with the horn offering a distraction. Dream is fine enough to knock Cole off the ladder and into the windshield though, drawing some blood from Cole’s arm.

The Era beats Dream down in a hurry and that means it’s time to fill the ring with chairs. Dexter Lumis pops out from under the ring though and beats up the Era, even throwing them in the trunk of a car and driving off. Dream is down on the pile of chairs so Cole pulls himself up, only to have the Panama Sunrise countered into a Dream Valley Driver for two. Dream says it’s Dream Over so Cole hits him low and hits the Panama Sunrise onto the chairs to retain at 14:58.

Result: Adam Cole b. Velveteen Dream – Panama Sunrise onto a pile of chairs (14:58)

We recap Karrion Kross vs. Tommaso Ciampa. Kross debuted and attacked Ciampa so it’s time for his first real test.

Kross starts fast and sends Ciampa down in a hurry. Ciampa is back up with the Willow’s Bell attempt. Which is countered for a kick to the face. They head outside with Kross dropping him back first onto the apron and there’s a hard suplex back inside. Kross hits a big clothesline and loads up a chokeslam but Ciampa slugs away to knock him to the floor. Now Willow’s Bell can connect for two but the Fairy Tale Ending is countered into an F5. The Krossjacket goes on and Ciampa is out at 6:12.

A disheveled Robert Stone is here.

We recap Charlotte vs. Io Shirai vs. Rhea Ripley for the Women’s Title. Charlotte beat Ripley to win the title at Wrestlemania and then Shirai won a ladder match to become #1 contender. Shirai beat Charlotte via DQ so the triple threat title match was set.

Charlotte is defending and bails to the floor to start. Back in and Charlotte takes them both down while shouting about how this is her house and they are just guests. Ripley fights up but gets sent hard outside, with Charlotte sending her even harder into the barricade. Shirai grabs a hurricanrana off the apron to take Charlotte down but she’s back up to run both challengers over.

Charlotte and Shirai are back inside with the former grabbing the Boston crab until Ripley makes the save. Shirai cuts Ripley off though and adds a 619 to Charlotte. A double stomp to Charlotte’s ribs keeps her down but Rhea is up to drop Shirai and put everyone on the mat for a bit. Charlotte gets in a double spear for the double knockdown but the moonsault hits Ripley’s knees.

Shirai escapes the Riptide and grabs the Crossface on Charlotte, meaning Ripley has to make another save. That’s fine with Shirai, who hits a springboard missile dropkick on Ripley but Charlotte grabs Natural Selection for two more. Shirai knocks Charlotte outside and hits the big suicide dive onto Ripley. Charlotte is back up to take Shirai down and the brawl with Charlotte starts going around the arena. Shirai uses the distraction to get up to the top of the house set and dive onto the other two for a huge crash.

Charlotte stays down on the floor but Ripley can’t superplex Shirai. They switch places as Charlotte gets back in and pulls Shirai down. Ripley is ready for her though and it’s a super Riptide to Charlotte for two with Shirai making the save. The standing Texas Cloverleaf has Shirai in trouble until Charlotte makes the save with the kendo stick. The spear sets up the Figure Eight on Ripley but Shirai moonsaults onto Ripley (mostly onto her head) for the pin and the title at 17:40.

Confetti and streamers end the show. 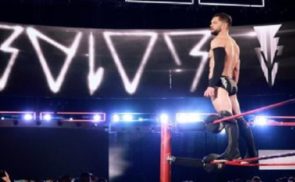