It’s been a long time. WWE has been around for a very long time and that means there are going to be some people who come and go. Some of these names were longer term employees, but at some point, almost everyone leaves. It might be a long time before you see them again, but it can make a surprise appearance all the more entertaining. We have recently seen another of those.

On Sunday, NXT will present Takeover: In Your House, marking the first time that the show has run since 1999. In Your House was a long running series of events that started way back in 1995, meaning there was a very different cast of people around the show back in the old days. However, one such name is making a return, at least in the short form, to hype this show.

WWE has released a video featuring former WWE personality Todd Pettengill hyping up Takeover: In Your House. Pettengill was one of WWE’s major backstage interviewers and television hosts from 1993-1997 when he left to host a radio show. He has made a few appearances for the company since, including hosting the Best Of In Your House DVD and appearing on the WWE Network special Day Of Royal Rumble 2020.

Pettengill was around for a long time back in the day. Check out some of his moments:

Opinion: I mean, why not? Pettengill is best known for his time in that era so having him back for a one off show is a cool idea. I can’t imagine he’s around long term, but appearing here or there for some special shows could be fun. It’s certainly a nice nostalgia run for some fans and there is nothing wrong with something like that. Just have some fun and see what happens. At worst, it’s a one off and nothing more. How much could that hurt?

Who is your favorite backstage interviewer? Who else would you like to see make a return? Let us know in the comments below. 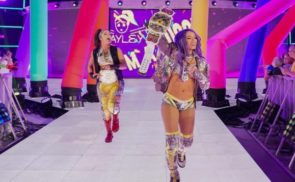