Things continue to pick up around here as we have the second week of New Year’s Smash. This time around we are going to be seeing the TNT Title on the line as Brian Cage challenges Darby Allin, meaning a Sting appearance is certainly not out of the question. Let’s get to it.

Pac starts fast by sending Kingston to the floor for the dive. They head back inside with Pac hitting a pump kick, followed by a missile dropkick to put Kingston into the corner. Some knees to the head rock Kingston again but he’s back with a middle rope knee to the back of the head. Allie gets in some eye raking from the floor and Kingston adds a t-bone suplex. Back in and a neckbreaker gets one before Pac’s head is driven into the mat.

Some chops in the corner let Kingston pull on Pac’s ear but he snaps off a German suplex for a breather. Back up and Kingston hits an enziguri into a Saito suplex for two. Pac gets in his own kick to the head that makes Kingston look straight into the camera, setting up the top rope superplex for his own near fall. Another kick drops Kingston and the Black Arrow finishes for Pac at 9:39.

Post match the big brawl is teased but Lance Archer comes in to chase off Kingston and company.

Orange Cassidy and Kip Sabian (with a Trent cutout) are at ringside and if Miro wins, Chuck is his butler until the wedding in three weeks. Miro starts fast and knocks him outside but Chuck gets in a whip into the barricade for a breather. Sabian jumps Cassidy but gets superkicked by Chuck. That’s enough of a distraction for Miro to get in a leg lariat, followed by the jumping superkick. Game Over finishes Chuck at 3:26.

Matt Hardy speaks for Private Party, who he insists are great. The team isn’t all that thrilled with part of their contracts but Hardy says they should have read them better. He is the only person here who cares about Private Party and the sooner they learn that, the happier they will be. So when he says jump, they say how high. NOW GET OUT OF HERE.

Here’s the Inner Circle and, after the required Judas chorus from the fans, and a break, it’s time to hear about their new year’s resolutions. Jake Hager wants championships, MJF wants to strengthen their bonds and get rid of the fat people and Ortiz wants to learn one of his grandmother’s recipes. Jericho loves all of those ideas and thinks this is the year he and MJF win the Tag Team Titles. That’s not cool with Santana, because he and Ortiz are the Inner Circle’s tag team.

Sammy Guevara sees what is going on here: Jericho is a tag team sl**! Jericho has teamed with Santana, Hager, he and Sammy were Le Sex Gods. Is he going to team with Snoop Dogg next? Jericho: “…..MAYBE!” Jericho thinks we should have Jericho/MJF vs. Santana/Ortiz vs. Sammy/Hager to determine the OFFICIAL tag team of the Inner Circle. Hager: “CHAMPIONSHIPS! YEAH!” Jericho: “Sammy and Hager. That’s funny.” Sammy: “Why is that funny?” The team poses and everything seems cool.

The Dark Order talks about how important the Brodie Lee tribute was for the team. Everything the team does will be in his name, and next week it starts with Hangman Page teaming with the Dark Order. Page, with his glass, staggers in so everyone can show their appreciation. Maybe after the match, he can let them know if he’s going to join! Page agrees and leaves, with the team celebrating his joining in advance. It turns out that Page only took about a step….and we go to a break anyway.

Video on Taz and the construction of Team Taz, setting up the title match against Darby Allin later tonight. Sting joining in to seemingly mentor Allin might even the odds a bit though.

Kenny Omega, Don Callis and the Young Bucks are fired up and have all the titles.

Callis handles Omega’s entrance. Actually hold on as he also introduces Omega’s real partners for the evening: the Good Brothers, which doesn’t sit well with the Bucks or Tony Khan in the back.

It’s a brawl to start with Omega and the Brothers cleaning house. Everything breaks down though and Limelight kicks away at Omega, with the Blonds clotheslining the Brothers outside. The Kitaro Crusher drops Limelight though and it’s Anderson coming in for a hard whip into the corner.

Back from a break with Limelight still in trouble but managing a hurricanrana out of the corner. Omega cuts him off but Limelight gets over for the hot tag to Pillman. Air Pillman hits Anderson and it’s a Blockbuster/spinebuster combination for two. Omega grabs a neckbreaker for two and Anderson hits a big boot for two. Limelight tries to run the corner but gets caught in a spinebuster. The Magic Killer is good for the pin at 9:26.

Post match here’s Jon Moxley to charge at all three of them, with the numbers game catching up. Cue the Lucha Bros of all people to go after the Good Brother so Moxley can hammer on Omega. The Young Bucks come in to break it up…and are superkicked by the Lucha Bros. The Good Brothers get back in and the brawl is on again, with agents and referees finally breaking it up.

It’s time for the Waiting Room with Dr. Britt Baker. After a quick intro dance with Rebel, Britt convinces the fans that they have a gift underneath their chairs. Her guest tonight is Cody Rhodes, who needs to pick his best friend already. Just make one good choice, unlike the one on your neck. This brings in Cody, in a green jacket and with some Gillberg sparklers during the entrance (Britt: “All contractual obligations met. We’ve got the pyro.”).

Britt congratulates Cody on his upcoming baby, who will have an action figure before her. Cody can’t talk before Baker cuts him off with a surprise guest. That would be Jade Cargill, who says no one cares about Brandi being pregnant. She and Shaq are tired of waiting though, because Jade needs an opponent. She shoves Cody so here’s Red Velvet to hit a heck of a slap.

Jade gives her one back and the fight is on, with the fans breaking it up. Velvet is taken outside and we cut to a video of Britt and Rebel attacking Thunder Rosa a few weeks back. Rosa pops up to say Britt her has show because she likes to put her big nose in people’s business. Some Spanish ranting sets up the announcement of Baker vs. Rosa on February 3 at Beach Break. Baker yells a lot because Khan said they didn’t have to wrestle. Cody never said a word other than shouting for help to break up the brawl.

Marko Stunt/Jungle Boy for the Express here and Luchasaurus and Tully Blanchard are here too. Marko and Cash start things off but it’s off to Dax to drive him into the corner. A slap from Marko earns him a beating in the corner and Wheeler comes back in for the same. Marko’s moonsault out of the corner is countered and a dropkick seems to mostly miss. Boy comes in and everything breaks down with Boy monkey flipping Stunt into a hurricanrana to Harwood.

Stunt’s suicide dive hits FTR and Boy adds his own dive as we take a break. Back with Wheeler hitting a spinebuster for two on Stunt and then grabbing a Gory Stretch. Stunt wiggles his way out for two off a sunset flip before rolling away from Dax for the tag off to Boy. House is cleaned with some clotheslines into a Backstabber for two on Harwood, followed by a super hurricanrana for the same.

There’s a superkick before Boy throws Stunt onto Harwood for two more. Sliced Bread is countered with a toss and a hard lariat drops Stunt again. A low blow gets Stunt out of trouble though and now a Dudley Dog can connect for another near fall. Tully posts Marko though, earning him a glare from Boy. Wheeler sends Boy into the barricade for his efforts though and it’s the Big Rig (Goodnight Express’ new name) for the pin at 12:25.

Deeb is defending and Conti has Anna Jay with her. Feeling out process to start with Deeb taking her down for an early rollup. Conti goes for the leg to set up a heel hook, which is reversed into a chinlock. That’s broken up as well so Conti pump kicks her out to the floor. Back with Conti hitting a full nelson spun into a Stunner for two but getting caught in a Stretch Muffler. Deeb switches to take her up top for a Gory Special using the ropes for extra leverage. Conti can’t get a Gory Bomb so Deeb reverses into a pancake (the Deebtox) to retain at 9:07.

Allin is defending, Team Taz is at ringside and Taz is on commentary. Allin goes straight at Cage and knocks him outside, setting up the suicide dive. Another one is pulled out of the air into a suplex on the floor though, followed by Cage LAUNCHING Allin from the ring through a ringside table. Cage picks Allin (now bleeding) up in a suplex, walks him up the steps and throws him inside for another crash. A release German suplex sends Allin flying and Cage unloads with right hands to the busted open head.

We take a break and come back with Cage hitting an F5 for two, followed by a trio of powerbombs. Another powerbomb sends Allin over the top and onto the ramp but Allin says bring it. The apron superplex gets one and Cage is livid. Cage loads up the steps at ringside but an F5 from the apron to the floor is escaped. Instead Allin bites the fingers to knock Cage onto the steps, setting up the Coffin Drop onto Cage onto the steps (Taz: “That’s not good.”).

They get back in with Allin hitting the flipping Stunner and using his belt to tie Cage’s legs together. A Code Red gives Allin two and there’s a middle rope stomp. Hook’s distraction lets Ricky Starks crotch Allin but here’s Sting with the baseball bat shot to Starks’ throat. The super crucifix retains Allin’s title at 12:39. 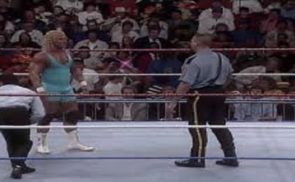 KB’s Review: Well That Was Easy