It’s the go home show for Takeover: WarGames and that means it’s time for another ladder match (yes I said another ladder match). There is also one last spot to be filled on Team Blackheart and there is a chance that could be revealed tonight. Other than that, it’s time for the final push towards Sunday and that is where NXT shines. Let’s get to it.

The roster, including the bosses, are on the stage for an In Memory Of Pat Patterson graphic.

We get the big video tribute, set to Patterson singing My Way, as only it could be. That’s a big one as Patterson really was one of the forces in WWE and an absolute genius at all things wrestling.

The roster gives us a THANK YOU PAT chant in a pretty emotional moment.

Johnny Gargano is on commentary and Priest seems to be replacing Curt Stallion, who was jumped by Legado del Fantasma. Earlier today, Priest attacked Joaquin Wilde for sticking a finger in his face, meaning there is no Wilde here with Santos Escobar/Raul Mendoza. Ruff insists that he gets to start with Escobar as Gargano explains what a dad joke is supposed to be. Escobar gets taken down early but Ruff is pulled into the corner for a tag off to Mendoza.

That doesn’t go well for Ruff and it’s already back to Escobar for a jumping knee to the face. Priest comes in for a change and has some trouble with the faster Mendoza. They head outside with Mendoza getting sent into the barricade but Priest is distracted by the Ghost Face in the crowd. That’s enough for Escobar to hit a suicide dive and we take a break. Back with Priest grabbing Mendoza by the throat but getting dropkicked by Escobar.

A suplex gives Escobar two and it’s time to start working on Priest’s knee. Priest is fine enough to power up with a Downward Spiral to Escobar but he’s a little hesitant to bring in Ruff. He finally does though and it’s time to clean some house but a Mendoza cheap shot puts Ruff down. That’s only enough to knock Ruff over to the corner for the hot tag to Priest and now it’s time for the real house cleaning. Priest loads up the Reckoning but Ruff tags himself in. That’s fine with Priest, who Reckonings Mendoza, setting up Ruff’s frog splash for the pin at 12:23.

We look back at the end of last week’s show with a masked man costing the Undisputed Era the WarGames advantage.

Rhea Ripley and Ember Moon show Shotzi Blackheart an engine for their war machine. Blackheart thinks she’s in love and is ready to go to war.

We look at Undisputed Era’s history in WarGames. The team is together and getting ready for one more match, even after Pat McAfee and company have been taking them apart a few times. They’re ready to go to war but their backs are against the wall. This time though, they’re going to make McAfee and company their b******.

Team LeRae laughs off the idea of anything from Team Blackheart. The team is ready to fight and Raquel Gonzalez is going to gain the advantage. Tonight, Blackheart is going to feel like she has been run over by a tank.

Grimes has a bag with him and pulls out the strap. Some kicks to the chest have Grey in trouble to start and there’s a hard whip into the corner. Grey manages a dropkick and a jawbreaker, followed by a running neckbreaker to rock Grimes. Back up and Grimes sends him to the apron, with Grey going up top for a rope walk spinning high crossbody. Grey’s rollup gets two but he gets caught in a swinging Side Effect. The Cave In finishes Grey at 2:17.

Post match Grimes says Dexter Lumis is making a mistake with the strap match and ties Grey by the wrist. A clothesline drops Grey again and the whipping ensues. Grimes gets a little too cocky though and here’s Lumis to take Grey’s place. The beating is on with Grimes being sent running off.

Atlas armdrags him into an armbar to start and Nese hides in the ropes for a bit. A dropkick sends Nese outside but he’s fine enough to crotch Atlas on the top back inside. We cut to the back where Pat McAfee and Company arrive and come back to full screen with Nese kneeing Atlas in the face. The torture rack keeps Atlas in trouble but he’s right back with a few right hands. Some forearms give Atlas two but Nese is back with a throat snap across the top rope into a low superkick. Nese misses a running knee in the corner though and the cartwheel DDT gives Atlas the pin at 5:24.

Post match Atlas says that bad things have happened around here but he’s not going to stop. One day, he is going to be Cruiserweight Champion.

Here are McAfee And Company for their weekly chat. McAfee says rest in peace to Pat Patterson, who he respects and appreciates. Then you go to the opposite end of the respect spectrum with every wrestling fan at home and here tonight, plus the Undisputed Era. Earlier tonight, we had to see a night out with the Undisputed Era, which was the lamest night out McAfee had ever seen in his entire life.

That was all about nostalgia BROTHER, so let’s do that themselves. McAfee talks about investing into greatness here because he has more money than anyone here has ever seen. He talks about how great they are and talks about Pete Dunne being the longest reigning United Kingdom Champion. Last week, Dunne won a ladder match, with the help of a masked man (who must be handsome and athletic under the mask, but it certainly wasn’t him) and on Sunday, they will have the advantage as a result.

Then you have thirty years of experience between the Tag Team Champions, who have finally gotten the chance that they deserve. McAfee wants everyone to watch on Sunday because he wants them to feel every single bit of pain. You can tune in to see him get hut, but the truth is that these guys broke the Undisputed Era’s spirit. Dunne says the Era is done this Sunday and McAfee wraps it up.

The older man makes Boa and Xia Li dunk their heads under water. They then bow to him, only to be attacked from behind.

Ever Rise vs. Grizzled Young Veterans

Hang on though as here is Imperium to jump Ever Rise and say this is their tag division. They want the Veterans right now so let’s do this instead.

Aichner works on Gibson’s arm to start and hands it off to Barthel for more of the same. Drake comes in to slug away at Barthel but gets taken into the corner as well, meaning Imperium can start taking turns on him. A suplex doesn’t work though and it’s back to Gibson to clean a bit of house. An armdrag into a headscissors doesn’t do much to Aichner so they hiptoss each other to the floor.

Back from a break with Aichner in trouble, including a spinwheel kick from Drake to give Gibson two. Drake gets dropped ribs first onto the top rope though and Gibson gets catapulted into the corner to put him in trouble. The stereo dropkicks in the corner set up White Noise to give Barthel two. Gibson gets in a shot to the throat to slow Barthel down but Aichner breaks up the tag attempt (even though Drake is still down on the floor).

A spinebuster into a kick to the face into a tilt-a-whirl faceplant gets two as frustration begins to set in. Aichner’s moonsault hits knees though and now the tag brings in Drake. Aichner catches Drake on top for a superplex though and Gibson has to make a save this time. With everyone else on the floor, Aichner hits a huge dive, only to have Ever Rise come in to send Barthel into the steps for the DQ at 14:04.

Result: Imperium b. Grizzled Young Veterans via DQ when Ever Rise interfered (14:04)

During the break, Ever Rise ran off while still talking trash.

It’s time for Thatch As Thatch Can. Thatcher talks about how tired he is of all the interruptions….and Tommaso Ciampa is behind him. Ciampa says he’s here to teach and class is in session. Thatcher says he doesn’t want any trouble and then tackles Ciampa down, with Ciampa getting the better of things (Ciampa: “LESSON #1: DON’T BE AN A**!”). Thatcher’s student gets in a cheap shot from behind though and the beating is on, with Thatcher choking Ciampa out.

Thatcher is proud of his student and says on Sunday, Ciampa is going to learn respect.

Ladder match for the WarGames advantage. Shotzi kicks away to start but misses a charge in the corner. Gonzalez gets her in an over the shoulder backbreaker before flipping her down and grabbing the hair. Blackheart gets knocked off the apron so it’s time to set up the first ladder. A dropkick through said ladder has Gonzalez down but she manages to drop Blackheart face first onto a ladder.

Back from a break with Shotzi hitting a DDT onto the apron for another double knockdown. Gonzalez is right back with a steps shot to the face and it’s time to set up the ladder in the ring. Shotzi makes another save and they take turns sending each other into the ladder. Said ladder is laid over the middle rope and Shotzi’s running inverted Cannonball sends Gonzalez into the ladder. With Gonzalez on the floor, Shotzi hits a big dive to take her down again.

The rest of the teams are looking on from their podiums but come to ringside to start the brawl at ringside. Indi Hartwell can’t get the briefcase down as Blackheart makes the save, only to have Gonzalez take Shotzi down. Gonzalez goes up but here’s Io Shirai to take her down. After sending Gonzalez outside, Shirai hits the huge moonsault onto everyone else. That’s enough for Blackheart to climb the ladder to win the briefcase at 14:39.

Team Blackheart poses on the ladder to end the show. 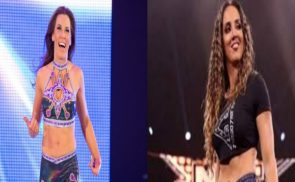