Winter is coming and….or wait is Winter here now? Anyway it’s a huge show with a mega main event of Kenny Omega challenging Jon Moxley for the World Title. That would have seemed to be a pay per view main event level match but I can see why they couldn’t wait until late February. Let’s get to it.

The final two standing will face off for the diamond ring next week, so we see a quick promo from MJF, who says the ring belongs to the Inner Circle. Hardy throws Kassidy out from behind as there are several people on the floor but not eliminated. The Dark Order helps Page get rid of Serpentico before knocking Luther out. Spears tosses Sydal but gets eliminated as well, drawing Tully Blanchard out of his seat in the crowd.

The fans give Spears the Goodbye Song as Blanchard gives him the slug to load up the glove. Spears decks Sky with said glove and Sky is tossed in a hurry. Reynolds and Quen are sent to the apron with Silver being tossed into Reynolds for the elimination. Silver is eliminated a few seconds later, with Hardy being very pleased with his work. Hardy sends Page to the apron and Quen knocks Page….right into the Dark Order to catch him. Back in and Hardy gets rid of Page, followed by Cassidy getting rid of Sabian.

That makes Sabian pull Cassidy to the floor and Miro takes him out (not eliminated) for a bonus. With the Inner Circle standing in the corner, Miro gets rid of Johnson and spikes Janela with the swinging Rock Bottom. Hardy goes after Miro and gets sent to the apron, with Miro getting rid of Hardy, Kassidy and Janela in a row. That leaves with with Miro, Jungle Boy, Wardlow, MJF and Guevara, plus anyone still active on the floor.

The Inner Circle goes after Miro, who shrugs them all off. That gives us the Wardlow vs. Miro slugout until Sammy and MJF save Wardlow from the big clothesline. Wardlow hits a clothesline and the trio gets rid of Miro. Boy and Guevara wind up on the apron for an exchange including a bunch of flips and shots to the head but no eliminations.

MJF shoves them both off the top and out but Orange Cassidy is still in. Wardlow drags him back in and loads up Cassidy but MJF goes to try and eliminate Wardlow instead. That lets Cassidy make the comeback with Orange Punches and Wardlow is tossed, leaving Cassidy and MJF to win at 12:13.

Rating: C+. They kept this moving and there was enough stuff building towards the future to make it that much better. It also helped that they gave the annoying ending a bit of a twist by having Wardlow bring Cassidy back in rather than having him pop back in. Not a classic or anything, but it was effective and I’ll take that.

Post match the Best Friends come in to celebrate as referees have to hold Miro back.

The Inner Circle is here with Jericho. Kazarian grabs a headlock to start and then scores with a right hand to stagger Jericho. An Oklahoma roll gets two and we’re right back to the headlock to keep Jericho frustrated early on. Jericho manages to send him to the apron but the triangle dropkick is broken up, allowing Kazarian to hit a springboard clothesline. They fight outside with Jake Hager’s interference earning himself a trip to the barricade. Back in and Jericho scores with a Codebreaker before knocking Kazarian right back to the floor.

We come back from a break with Kazarian hitting some running clotheslines and forearms. Kazarian’s dropkick misses but the Lionsault only hits knees. They head up top with the Flux Capacitor (Spanish Fly) connecting for two on Jericho. Kazarian puts on his own Walls of Jericho with Hager telling Ortiz not to interfere to avoid the DQ. Cue MJF to tease throwing in the towel but Guevara runs in to cut him off. Kazarian grabs a rollup for two but charges into the Judas Effect for the pin at 11:04.

Post break Guevara and MJF are ready to go but Jericho cuts him off. He’s tired of this and says either they get this together next week or the Inner Circle breaks up next week.

The Young Bucks are asked about facing the Hybrid 2 next week but ask Alex Marvez if he remembers when they superkicked him in the face. Another superkick doesn’t ensue but they do say if the Hybrid 2 can win next week, they can have a title shot. The Acclaimed comes in to insult the Bucks’ book with Max Castor rhyming about how it should be in the adult section because of where the Bucks are looking. Cue the Hybrid 2 to jump the Bucks until SCU makes the save.

Rebel is here with Baker, who insults Thunder Rosa before the match.. Hirsch takes Baker down to start and Baker is certainly not pleased. A headlock takeover makes it worse and Baker’s reversal attempt just earns her a cross armbreaker. That’s broken up and Baker hits a low superkick into a DDT. We take a break and come back with Hirsch hitting a kick to the face and a bicycle kick to send Baker outside.

Hirsch hits a suicide dive onto Rebel, with Baker pulling her in the way. Baker gets in a cheap shot and sends her face first into the apron. Back in and a jumping knee to the face looks to set up a cross armbreaker but Baker reverses into Lockjaw, which is reversed into the armbreaker as Rebel wasn’t ready with the glove. Baker slips out again but gets caught with a knee to the head. Rebel offers a distraction though and it’s a fisherman’s neckbreaker to set up the Lockjaw for the tap at 8:45.

Post match here’s Thunder Rosa for the brawl, with agents and referees having to break it up.

We look at Team Taz vs. Cody Rhodes/Darby Allin, setting up the tag match.

It’s Powerhouse Hobbs/Ricky Starks here with Taz at ringside. The brawl is on to start and we take a very quick break. Back with Allin being sent outside for a big running charge from Hobbs. Allin gets sent hard into the barricade and it’s time to go back inside for some shots to the ribs. Starks hits a few shots of his own and it’s back to Hobbs for a waistlock.

Allin gets in a shot to Starks’ face but Hobbs still isn’t ready to allow the hot tag. Hobbs sends Allin flying with a suplex but Allin flips out of back to back belly to back suplex attempts, allowing the hot tag to Cody. House is cleaned but Cross Rhodes is blocked. Instead it’s the Cody Cutter to Starks with Allin tagging himself in. Cody dives onto Hobbs, leaving Allin to hit the Coffin Drop for the pin at 11:14 (even though Starks’ shoulder was off the mat).

Post match Team Taz goes after Arn Anderson but it’s Dustin Rhodes coming in for the save. Brian Cage comes out to give both Rhodes Brothers the F5. The lights go out though and it’s STING making his debut for the save. After a quick staredown with Arn Anderson, Sting looks at Cody in the corner and then glares at Allin.

Hikaru Shida isn’t scared of Abadon because she is just a zombie cosplayer. Something falls off camera and Shida gets shaken up and leaves in a hurry.

Jon Moxley says things felt a little different when he landed in Jacksonville last night. It was finally time for two warriors to go to battle because the contracts have been signed and the promos have been cut. Now all that is left to to is make the crowd go banana.

Moxley is defending and Don Callis joins commentary. Omega gets backed into the corner to start but comes out with a wristlock. Moxley’s headlock takeover gets him out of trouble and it’s Omega hitting some chops in the corner. Moxley doesn’t seem to mind and drives him into the other corner. A hurricanrana puts Moxley down but the Rise of the Terminator takes way too long, allowing Moxley to hit a Boss Man Slam.

They head outside with Moxley being whipped into the barricade but Moxley sends him in as well as we take a break. Back with Moxley favoring his knee and Omega hitting the Kitaro Crusher for two. The leg is bent around the middle rope for a running dropkick but another attempt is cut off by Moxley’s running clothesline. Omega is right back up with a series of chops but YOU CAN’T ESCAPE is escaped, with Moxley snapping off a German suplex.

Another shot to the knee cuts Moxley down again though and we take another break. Back with Omega hitting the big flip dive to take Moxley down on the floor. Omega tries to springboard back in though and dives right into the Paradigm Shift. Instead of covering though, some chairs are brought in so they can sit down and slap it out. Then they switch to right hands until Omega gets knocked out of the chair, only to come back with the V Trigger.

There’s the Snapdragon into a second one to rock Moxley. The V Trigger misses though and Moxley snaps off a German suplex. Omega pops back up with another V Trigger but Moxley blasts him with a clothesline for the double knockdown. There’s another Paradigm Shift for a delayed near fall so Moxley sends him outside. The suicide dive is cut off by another V Trigger, followed by a missile dropkick to the back.

The fourth V Trigger connects to the back in the corner and a Tiger Driver 98 gets two more. Some hard knees to the face look to set up the fifth V Trigger but Moxley blocks, only to have Omega hit another V Trigger. The One Winged Angel is countered but neither can hit the Paradigm Shift. Omega scores with a dropkick and a ripcord V Trigger connects. Moxley slips out of another One Winged Angel but Omega hits a wheelbarrow suplex for two. Omega goes up top but jumps down to the floor before Moxley can shove him down.

Moxley grabs another Paradigm Shift on the floor and that’s enough for the doctor to come over to check on Omega. Referees and Callis go down to check on Omega but Moxley isn’t having any of this. He throws Omega back inside and hammers away so Callis grabs the mic. Moxley knocks him down so Omega grabs the mic to hit Moxley in the head. The champ is busted open so Omega hits four V Triggers in a row and it’s the One Winged Angel to make Omega champion at 28:28.

Post match Callis and Omega run off with everyone in the back yelling at them for cheating. They run to the car with Callis saying they’ll tell you about it on IMPACT Wrestling next week.

In a very, very quick closing line, Eddie Kingston runs out to say he wants Lance Archer next week to end the show. 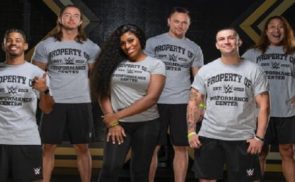