It could go somewhere. WWE is a huge entertainment company and that includes a lot of different things that don’t include wrestling. They have their hands in all kinds of things, ranging from a movie studio to everything they air on the WWE Network to any outside projects they can get into. The latter can be the most interesting, and now we know one of their next ideas.

There are a lot of personalities in WWE and several of them are able to put in some good performances in front of a camera. At the same time you might be able to find someone who can be rather impressive when they are just being themselves. That is supposed to be the case in the world of reality television and WWE is getting into the same area all over again.

WWE has announced the details on their new upcoming reality series Fight Like A Girl, which will feature Stephanie McMahon. The idea of the show was to have McMahon pair a young woman facing a difficult problem with a female WWE star. Some of the wrestlers involved include the Bella Twins, Alexa Bliss, Charlotte, Nia Jax and Becky Lynch among others. The series will be filmed at the Performance Center and there is no date on when it will debut.

It’s quite the catchy title. Check out some women fighting against men in WWE: 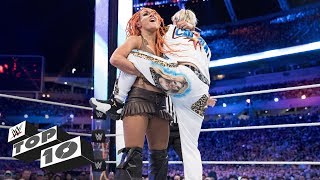 Opinion: This sounds like something that is going to work perfectly well for its intended audience and that is all it needs to do. McMahon might be a little overbearing at times but she is a rather different person when she is being herself outside of WWE. Hopefully the show winds up being a hit as there is never anything bad about WWE getting more attention on itself.

Do you like the concept of the show? Who would you like to see on it? Let us know in the comments below.

The Boss Reverses Course: Triple H Apologizes For A Joke Made At Paige’s Expense, Paige Responds