It’s the first half of Bash At The Beach, with the second half coming next week from a boat (yes a boat). The big story this week is the fallout from last week with Jon Moxley turning down Chris Jericho’s offer of a spot in the Inner Circle with a champagne bottle. That all but guarantees a title match at Revolution so it’s time to built things up. Let’s get to it.

In Memory of Rocky Johnson, though JR makes sure to mention La Parka, Kendo Nagasaki and Pampero Firpo passing away recently as well.

One fall to a finish for the #1 contendership. Trent shoulders Nick down to start but Nick is back up to miss a kick to the face, giving us a standoff. Page comes in to knock Chuck down so it’s off to Matt vs. Kenny, who shake hands before we’re ready to go. Santana tags himself in and everything breaks down for a bit, with the Bucks taking over again.

It’s Trent getting caught in the Bucks’ corner with Matt hitting the rolling northern lights suplexes. Matt tries one too many though and gets caught with a tornado DDT. It’s Chuck coming in to take over, including a standing Sliced Bread and a sitout powerbomb for two on Matt. Santana breaks up the big hug though and it’s a double belly to back flip to plant Matt. The big flips have Santana and Ortiz in even more in control and it’s the passing delayed vertical suplex to Matt.

Ortiz even throws in the Eddie Guerrero dance. Matt hits the flip Stunner out of the corner but since Nick isn’t on the apron, he tags Omega in instead of Page. Omega cleans house with Snapdragons all around and everything breaks down again. Page moonsaults onto Ortiz and Chuck but Omega’s dive is broken up. Santana hits a springboard flip dive onto Page and Omega, followed by Chuck and Nick hitting stereo flip dives.

Trent one ups them all thoug by superplexing Matt onto the huge pile at ringside to put everyone down. We get the huge group suplex with the Bucks, Omega and Page being suplexes at the same time, with Orange Cassidy coming in for the deciding help. That means a big hug and JR is dying of laughter.

The Best Friends hit stereo piledrivers on Omega and Page and there’s Strong Zero to Omega, with the Bucks having to make the save. The Bucks clean house with superkicks and Page runs into a knee from Chuck. Santana and Ortiz get superkicked to the floor, leaving Trent to have to save Chuck from the Meltzer Driver. Page tags himself in though and low bridges Trent to the floor, leaving Chuck to take the Buckshot Lariat/V Trigger combination to give Page the pin at 16:34.

Here’s Cody, looking very Miami Viceish, to address MJF’s conditions for a match. We look at the stipulations (Cody can’t touch him until Revolution, Cody has to take ten lashes on live TV and Cody has to face Wardlow in a cage match) and Cody gets it. He understands what it’s like to have someone steal your thunder so maybe MJF understands that once Wardlow debuts, people will think MJF should be carrying his bags. He’s willing to take the lashes, but the easy one is not touching MJF until Revolution.

Cody is already living rent free inside MJF’s head and everyone knows MJF is stalling. MJF has wanted to be famous his entire life and he’s living off the old school wrestling people saying he’s a real villain. Cody accepts the stipulations and is willing to take the lashes because at Revolution, he’ll give MJF his own scar.

Joey Janela talks about looking forward to a new year but got hit low by Penelope Ford. Now Ford is with Kip Sabian, so Sabian can bring it on. Joey is ready to face Fenix next week and get the year on track in a good way.

Luther is here with Mel and Brandi, as commentary tries to explain that we should know who Luther is. Stadtlander goes after Brandi but Mel blocks her, leaving Luther to stop Shida in the aisle. Shida isn’t having that and beats him down with a kendo stick to get inside and save Stadtlander.

Mel gets sent outside to start so Stadtlander kicks her from the apron and then moonsaults from the apron to the floor for….kind of a slap to the back at best. Shida grabs the chair for the step up knee to Mel’s face as Luther has the referee by mistake. We settle down to Mel choking Shida, followed by Brandi getting in some choking of her own. Stadtlander tries to come in for the save so Brandi and Mel do the switch without making a tag.

JR isn’t sure why you wouldn’t just make a tag when you’re in control and we take a break. Back with Stadtlander coming in and hitting a spinning slam for two on Brandi. Mel makes the save so Shida comes in with a missile dropkick which grazed Mel at best. Brandi spears Stadtlander down for two and Mel plants her down for the same. Shida is back up with a superplex to Mel so Stadtlander can hit a running knee for two. Brandi gets knocked off the apron and it’s a kneeling Tombstone to finish Mel at 11:15.

A member of the Dark Order talks to the supreme leader about some cases they’re working on. They want Michael Nakazawa, Brandon Cutler and Hangman Page, all of whom have already been interested in the team or are prime targets.

Moxley drives the expensive car into the arena to show off. Sammy hits a running dropkick in the corner to start but Moxley sends him into another corner and hits a clothesline. A springboard cutter plants Moxley to send him outside though setting up the big running flip dive so Sammy can pose a bit. Moxley is right back up but can’t hit the Paradigm Shift on the apron. Instead Sammy hits a middle rope double stomp to the apron and then poses in the ring for a bonus.

We take a break and come back with Sammy hitting a running shooting star press for two. Moxley’s headlock driver gets two and he goes up top, only to get caught with a super Spanish Fly. A jumping knee to the head sets up a torture rack flipped into another knee to the face for two on Moxley and Sammy can’t believe the kickout. Sammy tries a moonsault press but Moxley pulls him straight into a rear naked choke for the pin at 9:25.

Post match Chris Jericho’s music hits and the lights to out. They come back to reveal the Inner Circle so the big beatdown is on in a hurry. Everyone gets in a shot and Jericho pulls a spike off of his jacket. It goes into Moxley’s eye, which is finally enough to bring out the referees.

Post break, Jericho says that was all on Moxley because they offered him the keys to the kingdom and he smashed a champagne bottle on Jericho’s head. They’ll beat up the Jurassic Express next week when Jericho wipes the deck with Jungle Boy’s hair. Oh and they’ll see Moxley next week, even if he can’t see them. Sammy hits on the interviewer before leaving.

MJF is wearing an “I BANGED DALLAS’ DAUGHTER” shirt, complete with the Diamond sign. Page, who is actually wrestling without a shirt, and MJF start but it’s already off to the Butcher before anything happens. Marshall comes in to face Butcher so it’s already back to MJF as we’re doing that thing. A cartwheel gets on MJF’s nerves and his offer of a handshake just earns him a middle finger.

Dustin comes in and cleans house but Wardlow slips in the diamond ring for a cheap shot. Bunny and Wardlow both get in their cheap shots and we take a break. Back with “Michael” Jacob Friedman dropping down onto Rhodes’ back and striking a few poses. He drops down onto some raised knees as well to crotch himself (an old Arn Anderson spot) and Dustin sends him outside, allowing the hot tag to Page.

House is cleaned with discus lariats all around and a Diamond Cutter drops Butcher. Another Cutter to Page is blocked so Dustin hits a middle rope Canadian Destroyer instead. Now the Cutter connects to send MJF to the floor and Dustin Cannonballs off the apron onto Butcher and Blade. Page DIVES OFF THE TOP ONTO EVERYONE and we spend so much time looking at replays that we miss MJF rolling up Marshall with trunks for the pin at 10:32.

A drunk Hangman Page interrupts SCU’s interview but Omega breaks it up. Omega shows respect and everything is cool, mainly because he gets Page out of there.

The winner faces Moxley next week for the #1 contendership. Darby starts flipping a lot and dropkicks Pac down, only to walk into a tilt-a-whirl backbreaker. A shotgun dropkick puts Pac on the floor but he’s fine enough to counter a hurricanrana into a swing into the steps. Back from a break with Allin being sent into the barricade and a missile dropkick connecting back inside. Allin reverses a super Samoan drop into a super crucifix bomb and the adrenaline is flowing.

A Coffin Drop to the floor drops Pack again and a Code Red gets two on Pac back inside. Pac cuts off a baseball slide by tying Allin in the ring skirt and a hard clothesline gives Pac two. We get a quick pinfall reversal sequence and we have five minutes of TV time remaining. Pac grabs a sitout powerbomb for two, with Tony freaking out on the kickout. Allin gets headbutted off the top though and the Black Arrow to the back finishes Allin at 11:46.

Post match Pac declares himself #1 contender because Moxley can’t go next week. Pac is coming for Jericho and the title but Tony cuts him off. We see Moxley, with his eye bandaged, being loaded into an ambulance but he gets out and comes to the ring. Moxley says he’ll wrestle blind if he has to and promises to go on to Revolution because it’s his title shot. 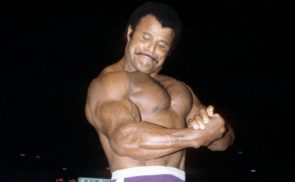