One more for the card. We are just over two weeks away from Clash Of Champions and a lot of the card has yet to be made official. WWE is starting to run out of time to set up a good number of matches as the company has a lot of titles that need to be defended in one night. Both roster will be having titles put on the line and now we have one more checked off the list.

Save for a five day reign by Charlotte, Bayley has held the SmackDown Women’s Title for about sixteen months straight. That has left quite the path of destruction throughout the SmackDown women’s division as there are not many people left for her to face. Last week on SmackDown, Bayley destroyed Sasha Banks to put their showdown on hold. This week though, she gained a new challenger for her title.

During this week’s SmackDown, Nikki Cross won a four way match to become the new #1 contender for the SmackDown Women’s Title and will face Bayley for the title at Clash Of Champions. The match also included Tamina, Lacey Evans and Alexa Bliss, with Cross pinning Tamina to win the match. Cross has challenges Bayley multiple times during her title reign, including this year at Extreme Rules, but has come up short each time.

The two have fought several times before. Check out some of their previous matches:

Opinion: This is absolutely a filler title defense and there is nothing wrong with that. WWE has set up a heck of a showdown between Bayley and Sasha Banks but they are going to take their time getting there. Cross is the kind of challenger who can fill in a spot and that is what she is going to do later this month. Now just give us a little drama and everything should be fine for the month. 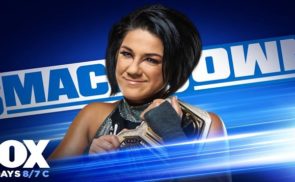