This could go several ways. For all intent and purpose, John Cena is not a wrestler anymore. He only wrestles every now and then and has not worked a match, either on television or at a house show, since January. Cena is now an actor and he is becoming a successful one at that. With the newfound success comes some different roles, including a potentially interesting one.

According to the Wrestling Observer Newsletter, Cena was seen on the set of Deadpool 3, which is currently filming in Vancouver, British Columbia, Canada. At the moment, there is no word on Cena having a role in the movie, though it is possible that it just has not been announced yet. It is also possible that Cena was just in the area and visited friends he has on the set.

Cena can still bring the comedy. Check out his appearance at WrestleMania 35: 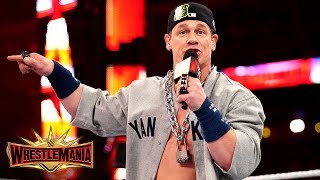 Opinion: As a big Deadpool fan, it could be interesting to see what Cena does with a role in the film. His comedy skills have gotten sharper in recent years and some of his film roles have been very funny, meaning he could fit into a movie like this quite well. Then again there is a chance he isn’t in the movie at all, even if Cena in superhero movies seems to be the biggest layup imaginable.

Do you want to see Cena in a Deadpool movie? What role would he play? Let us know in the comments below.