There’s always room for one more. The WWE roster is changing in a variety of ways at the moment, either through new names showing up or people moving from one show to another. That can make things a lot more interesting at times, but there are several other changes that can be either good or bad. One such change has gone under the radar and it could be a good thing for everyone involved.

This week on NXT, Tyler Breeze announced that he would be sticking around after Takeover: XXV. Breeze returned to NXT in May and challenged Velveteen Dream for the North American Title, eventually losing to him at Takeover. The move comes after Breeze had spent the last three and a half years on the main roster, with his greatest success coming as part of Breezango, though his partner Fandango being injured has caused his career to stall.

Welcome home. Check out Breeze getting back in an NXT ring at Takeover: 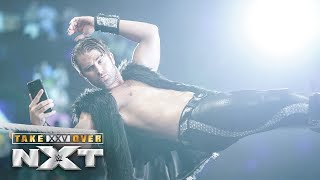 Opinion: Really, this is the best move for everyone involved. Breeze isn’t likely to become a top star in NXT again, but it’s a lot better than sitting around on the main roster and getting the occasional match on Main Event. Let him at least go down to NXT where he can at least have a chance, because that does not seem to be a realistic option on the main roster for one reason or another.

Is Breeze better off in NXT? Will he ever be a success on the main roster? Let us know in the comments below.

KB’s Review: Reviewing The Review – Double Or Nothing