KB’s Review: From A Certain Point Of View

In regular forms of entertainment, there is a concept called the unreliable narrator. Usually, when you are reading/listening to/watching some kind of story unfold, someone is there telling the story. Now in theory, that person should be honest and telling you what really happened, but that’s not always the case. What if that person is involved in the story and wants to fool you for some reason? Or, as can always be the case, what if they’re not all there in the head and see things completely differently than anyone else? It means that what you just heard might not be exactly how it went. The same is true in wrestling.

This week’s Monday Night Raw ended with an outstanding promo from Randy Orton as he FINALLY explained why he attacked Edge back in January. In short, Orton did it because he knew Edge couldn’t stay out of the ring and wanted Edge to be able to be at home with his family. Orton had been where Edge was before and because he loves Edge like a brother, he wanted to prevent him from making the same mistakes that Orton had made in the past. Now that’s all well and good, until you realize that Orton tried to cripple Edge and take away everything that he had worked for, all in the name of helping him.

That’s totally senseless to anyone but Orton himself, and that’s where things get interesting. The key thing to remember about heels is this: they don’t have to make sense to anyone but themselves. They can be as dastardly as they want to be, but in their minds, it’s all acceptable. It might not have made sense/been fair/anything positive to everyone else, but to them, it was the only thing that made sense.

This man is evil:

Ted DiBiase bought and paid for anything he wanted because it was his money and since everybody had a price, anything could be bought. Bobby Heenan could lie and cheat and steal because he was smarter enough to make it work. Vince McMahon could nearly burn his own company to the ground (more than once), all in the name of saving it. He would even torment his own family for the sake of getting the WWF Title off of Steve Austin, all because in the end, he loved the company and the power more than anything else and needed Austin to be destroyed.

The list goes on and on. Sometimes it’s more simple than others but when you get down into the heel psyche, it’s a different world. These things they do might not make sense on the surface, but if you can find a way that their mind would work, everything can be fine in the end, which is where you get to a good story. As it turns out, you can find this by looking at different instances in the careers of the members of Evolution.

We’ll start with an easy one in the form of Batista. This is the simplest of all: Batista cared about money and fame. it’s how he was brought into the business, when he started at the top with Evolution. Couple that with the background you hear in his biographical stuff about how he grew up in poverty and it’s easy to see: all Batista cares about is staying on top and he’ll do whatever he has to do to achieve it. If that means stabbing his friend in the back or throwing the fans under the bus, so be it. At the end of the day, it’s all about Batista and that’s good enough for him.

Then there’s Triple H, who has a bit more of a modern example. You might remember back in 2013, when Daniel Bryan was the hottest thing in the world and beat John Cena 100% clean in the middle of the ring to become World Champion at Summerslam. As soon as it was over, Triple H attacked Bryan, allowing Orton to come in and cash in the Money in the Bank briefcase to win the title.

Here’s what they can do:

Later, Triple H and Stephanie McMahon explained that they did it for the good of the company. See, the fans had it all wrong: the best thing for them wasn’t for the most talented wrestler to be World Champion, but the most marketable. It was best for business, and that’s what mattered. The fans were just too stupid to understand that, so the Authority was going to have to do everything for them, again trying to save the company so the fans could enjoy it because they didn’t know how things really worked.

That’s a situation where you have two different viewpoints on something and while the heels are explaining everything, it goes against what would be defined as the right thing. It’s handing the title to someone who didn’t earn it because they’re favored by the bosses, which goes against the essence of wrestling: the best wrestler is World Champion. It made you want to see Bryan get what he had earned all along, and that’s why it was so easy to get behind him at WrestleMania 30 (though Bryan did the kind of thing that almost no one else in his generation could have done and deserves all the credit in the world).

This guy is not sane:

Then finally we have Ric Flair, who is one of the most fascinating and insane wrestlers you’ll ever see who does the most logical things imaginable. For those of you who haven’t had the privilege of seeing Flair’s promos from the World Championship Wrestling show in the 1980s (the legendary 6:05 show), let me make this simple: Flair was a raving lunatic who would lose more and more of his mind every week, raving about how his shoes cost more than Dusty Rhodes’ house and how he was going to make Nikita Koloff his gardener (find these if you can and watch Tony Schiavone nearly dying of barely contained laughter).

The point was that Flair believed he was the greatest thing in the world and no one could touch him. In his mind, he was the greatest wrestler of all time and could do no wrong. That’s what made it so fun to see him go up top and get slammed down night after night and year after year. Now, a normal person would think this through and realize that it wasn’t something that was going to work. However, and this is putting it mildly, Flair is not a normal (or rational) human being.

In Flair’s mind, it made perfect sense to go to the top rope night after night, because, WOO, he’s Ric Flair! He’s the greatest wrestler in the world and no one can stop him. All those times that Sting and Lex Luger and Rhodes and everyone else slammed him down? They’re just lucky punks who can’t lace his boots and would faint the first time they rode their bicycle over to a real woman’s front door while Flair drove up in his Cadillac to give her a ride on Space Mountain.

It’s all about the way the person’s mind works. We sit here and watch Flair go up and shake our heads, because you would think at some point in the YEARS that he has spent crashing down off that top rope, he would have learned something. But why should Flair learn something? He’s the Nature Boy and there’s nothing anyone can teach him about wrestling because he’s the greatest wrestler who ever lived. Don’t believe him? Just look at the thirty pounds of gold around his waist.

Heels can come off as crazy or just not that bright, but that’s because they’re in their own world. It doesn’t matter if what they say or do doesn’t make sense to us. All that matters is that it makes sense to them and they are doing it for the greater good (which can be many things, including lining their own pockets). On Monday, it was a man saying he wanted to cripple his friend so his friend would be able to be a better father. That’s not exactly rational, but that’s why he’s a heel. 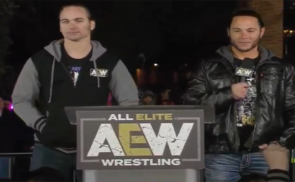 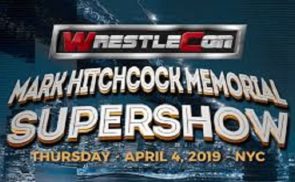