Ouch. There is nothing good about an injury taking place in wrestling but unfortunately there is also no way to prevent them. At the end of the day, these are rather athletic people doing rather athletic things and at some point, someone is going to get hurt. It can happen at any time and another example of that came during a match on this week’s Monday Night Raw.

When you strip away all of the details, the Viking Raiders are a pretty simple idea: two really big, strong guys who can hit very hard and look cool. They can do some rather athletic things for their size though, often throwing in dives that people their size should probably not be able to do. That makes for some impressive moments, but it can also go badly under the wrong circumstances.

Ivar of the Viking Raiders was injured during this week’s Monday Night Raw. Near the end of an eight man tag, Ivar hit a suicide dive onto the Hurt Business and immediately made the X sign with his arms after landing. The sign is the code for a legitimate injury and Ivar did not get up for the rest of the match. After the match was over, medics came down to check on Ivar. There is no word on the nature or severity of Ivar’s injury.

Hopefully it isn’t bad. Check out what Ivar can do when healthy:

Opinion: You could see the X go up as soon as Ivar landed and it was clear that something bad was going on. Hopefully it isn’t that bad, as that kind of a dive can have a lot of different results. Ivar is a big guy with a unique look and it would be a shame to see him have to go on the injured list when he is just starting to become a bigger deal. We’ll have to wait and see what happens next, but that does not look good.

What do you think of Ivar? What happens if he has to go on the shelf? Let us know in the comments below. 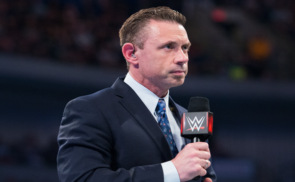