Haven’t seen you in a bit. There is so much talent under the WWE banner that they have had to split their rosters up into multiple different groups. This includes Monday Night Raw, SmackDown and NXT, all of which have their own stars and champions. Some of the divisions are not as strong as others though, which is why it feels special when they cross over, as they did this week.

We are less than a month away from Clash Of Champions and that means a big night where all of the titles are on the line. It makes the titles feel that much more important, but there are also a lot of shows on the way there. Those shows need something to fill in the time and if some of the champions are in action beforehand, so be it. That will be the case next week, in a pretty unique way.

This week on Monday Night Raw, SmackDown Tag Team Champions Cesaro and Shinsuke Nakamura appeared to challenge Raw Tag Team Champions the Street Profits to a champion vs. champion match on next week’s show. Cesaro said that the team was allowed to appear thanks to the Quarterly Brand vs. Brand Invitational, which was not further explained. The Street Profits accepted the challenge.

Both teams look good. Check out what we are in for next week:

Opinion: I’m not wild on the brands being mixed together very often and I really don’t need another concept like an invitational to explain why they cross over. I’m not sure if this is a reheating of the deal that they had earlier this year, but hopefully they aren’t just picking it up after weeks of nothing being said. Or maybe it is a way to set up a Clash match, which would be a little more acceptable. 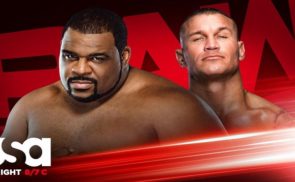