WWE News: You May See This Triple Threat At Clash Of Champions

Where champions clash. WWE runs a lot of pay per view events throughout the year and that means that they are going to need a lot of themes for those shows. Some of these are a bit better than others but one of the tried and true ideas is to present a show focused on championships. That will be the case later this month and now we might know another match set for the card.

The Coronavirus pandemic has affected different people in different ways, with some WWE wrestlers taking the summer off rather than risk the chances of being infected in a small area like the WWE Performance Center. Some of them have returned now that the company has moved into the full sized Amway Center. One such wrestler brought something with him and we might be seeing it defended soon.

According to Wrestling Observer Radio, WWE may be planning a triple threat match between Jeff Hardy, AJ Styles and Sami Zayn for Hardy’s Intercontinental Title at Clash Of Champions on September 27. Hardy defeated Styles for the title in August while Zayn returned from hiatus with the Intercontinental Title after being stripped of it in April. The three were involved in a brawl during this week’s SmackDown. WWE has not announced the match.

This could get interesting. Check out how we could get to the match:

Opinion: I don’t think this is exactly the biggest surprise and there is nothing wrong with that. Sometimes it makes the most sense to go with the logical choice and that seems to be what they are doing here. All three being in the same match makes sense and I can get behind the idea of a triple threat where there is a reason for having a triple threat. That isn’t always the case so having it make sense for a change is a nice thing to see.

What do you think of the potential match? Who would leave as champion? Let us know in the comments below.

What Happened After AEW All Out Went Off The Air 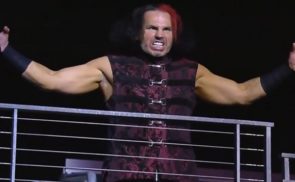