It’s tournament semifinals night as we get closer to finding out the next #1 contender to the World Title. That is of course assuming that the World Champion ever actually shows up again, which might not be the case for a long time to come. I’m not sure what that is going to mean, but it wouldn’t be Impact Wrestling without some kind of a mess. Let’s get to it.

In memory of Shad Gaspard and Hana Kimura.

Ace makes the mistake of trying some shoulder blocks for no effect but a springboard kick to the face works a bit better. A sunset flip doesn’t work either so it’s another kick to the face to stagger Hernandez again. Hernandez claps Austin’s ears so Austin kicks the rope for a low blow. Some kicks to the leg put Hernandez down and it’s time to stomp away to keep him in trouble.

The chinlock doesn’t last long so Austin dropkicks the knee out for two. Hernandez fights up without much effort and runs Austin over with some shoulders. The shirt comes off and Hernandez uses it to toss Austin across the ring without much effort. The Border Toss is escaped twice in a row and Austin hurricanranas his way out of a powerbomb attempt. Now it’s a suplex being escaped for another chop block, setting up the Fold to finish Hernandez at 9:43.

A biker drives past Cody Deaner’s compound. Cody tells them to slow down because “this ain’t no boneyard. They all think they’re bad***.” Good grief.

Johnny Swinger is ready to teach Chris Bey and has all of his gimmicks ready whenever they’re needed. Bey says they’ll figure it out in the ring.

The North arrives at the Deaner Compound and are greeted by a rather odd man.

Michael Elgin is ready for Trey in the tournament.

Johnny Swinger is here with Bey. The bigger Jake throws Bey down to start and there are some clotheslines to drop him again. Bey bounces up for some dancing so Jake runs him over again. A Swinger distraction lets Bey hit a running kick though and a springboard dropkick staggers Jake as we take a break.

Back with Bey stomping Jake down in the corner Jake says bring it on and the YES Kick brings him back to his feet. That’s fine with Bey, who kicks him right back down. The standing moonsault (a shot at Willie Mack) misses though and Jake hits a hard clothesline. An over the shoulder sitout Tombstone gives Jake two and a sitout powerbomb gets the same. Swinger offers a distraction though and it’s a Fameasser into the Final Finesse to finish Jake at 13:10.

Post match the beatdown is on so here’s Willie Mack for the save.

Rohit Raju is annoyed at having the TNA Originals coming in to take his spot. Chase Stevens comes in and the match is set for next week.

Rematch from last week where Lee cheated to win. Lee jumps her at the bell and unloads in the corner, only to get tossed into said corner with raw power. Lee isn’t having any of that and kicks Havok three straight times, setting up the choke. That’s broken up as well and Havok hits a spinebuster into a running knee. Lee rakes the eyes to break up the Samoan drop and grabs the brass knuckles. Cue Nevaeh to jump Lee for the DQ at 3:34.

Tasha Steelz, Kiera Hogan and Kylie Rae yell at each other in the back when Susie comes in. Kiera and Tasha jump Kylie and then do the same to Susie. Su Yung flashes on the screen.

The Deaners welcome the North to the compound.

Joseph P. Ryan wants OVE at ringside with him for his match with Mentally Unstable Steve next week.

The North comes into the Deaner barn and find a whole bunch of Deaners. Cody Deaner’s partner Wheels isn’t here yet, so the North starts guessing who he is (one incorrect guess is the referee, who is the legless referee who popped up in the early days of AEW). That’s enough for Ethan Page, who is ready to leave and throws a toy car. Cue Wheels, who is rather large, and the bell rings.

The North is defending and we’re in full on cinematic mode (meaning there are several cuts with a lot of action missing) with Wheels sending Page into various things on the floor. We see the weird guy from earlier watching from outside and running off to get something as he sees what is going on. Page throws a bag of golf clubs at Wheels but Cody picks one up to hit Alexander in the ribs.

All four fight outside with Alexander being thrown into the back of a truck. The North double Razor’s Edges Cody out of the back of the truck onto a pile of Deaners. We cut to Cody diving off of a trailer onto everyone and Alexander opening a car truck, allowing the weird guy to run off again. Page throws Wheels through a fence but Cody makes the save and drops Page on top of a car for two.

Alexander and Cody climb a ladder onto a really big truck with Alexander hitting a Tombstone. That means only Alexander can climb down so he and Page can go back into the barn and beat up Wheels in the ring. That’s good for two so they yell at the referee, who beats Page up with a 619. The 450 misses though and here’s Cody to clean house, including with the Deaner DDT to Alexander.

There’s no referee though and the North is back up for the double Neutralizer to put Cody outside. Wheels is back in to grab the champs by the throat but the running guy comes in to hit him low. He’s a referee too now (Page: “I don’t get it but I’ll take it!”) and a double pin with a fast count retains the titles at 7:45.

Post match the Deaners chase the champs back to civilization.

TJP and Fallah Bahh are ready to get their shot at the titles but the Rascalz come in to say they’ve beaten them before. Next week it’s what sounds like a #1 contenders match.

The Rascalz are in the tree house when Moose comes in to plug the show. Moose recaps the tournament and talks about how Trey might want to come after this World Title. We hear about some World Champions with Trey doing some quick impressions.

Flashback Moment of the Week: Moose vs. Cody on March 30, 2017 with Moose retaining the Grand Championship in a controversial decision.

Deonna Purrazzo is coming. She’s rather smart and it lets her wrestle better.

Rosemary talks to John E. Bravo about some deal with a fake healer that almost led to a marriage. Bravo feels like he sold his soul to Taya, which seems to get him a partnership with Rosemary. They’re leaving the bar next week and Rosemary hints that it will be a date.

Elgin throws him around with no trouble to start and then rolls out of a wristlock for a bonus. The headscissors goes on to keep Trey down but he comes up with a dropkick. A running shoulder drops Trey again but a hurricanrana sends Elgin outside. Another hurricanrana is blocked and an Asai moonsault is pulled out of the air. Instead, Trey hits a DDT off the apron to actually rock Elgin for the first time.

Back in and a split legged moonsault gives Trey two but Elgin pulls him out of the corner into a gutbuster. The confidence starts to turn up and a big right hand drops Trey again. There’s an elbow to the face into a snap suplex for two on Trey, who is back with a bunch of forearms. A jawbreaker staggers Elgin but he’s right back with an enziguri. Elgin pops him up but Trey lands with a Meteora as we take a break.

Back with Trey picking up the pace to survive a slugout and enziguring Elgin down. Trey goes to the apron but gets pulled into a cutter for two more. Another slugout goes to Elgin but Trey hits a quick Code Red for two. Elgin’s Falcon Arrow is countered into Stundog Millionaire, only to have Elgin BLAST him with a clothesline. Trey is back with three straight superkicks into a springboard cutter for two.

Elgin si back with a superbomb attempt but Trey reverses into a hurricanrana for two more. Trey is gassed but still manages to knee his way out of an apron superplex attempt. Trey’s top rope hurricanrana is countered into a sitout powerbomb and Elgin can’t believe the kickout. The Elgin Bomb is loaded up but Sami Callihan’s ICU pops up on screen. That’s enough for Trey to grab a jackknife pin for the upset at 21:30.

Elgin is LIVID to end the show. 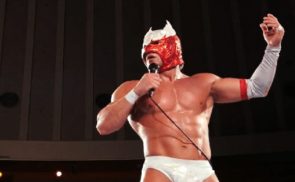