Welcome back? Wrestling is similar to a lot of other sports as sometimes you will see talented workers come and go without making the biggest impact. That does not mean they were bad at what they did, but sometimes there are too many people in not enough spots and they get lost in the shuffle. One name who showed some promise but never broke through might be willing to try things again.

As great as the WWE Women’s Revolution has been for the wrestling industry as a whole, there were other promotions treating women’s wrestling as a bigger deal earlier. The most prominent of these was Impact Wrestling, featuring the Knockouts division. Starting with Gail Kim in October 2007, the Knockouts Title has been a fairly big deal in women’s wrestling, and a former champion may want to get back in the ring.

Former Knockouts Champion Taylor Wilde has sent out a tweet suggesting that she may be returning to Impact Wrestling. Wilde sent out a drawing of herself in ring gear, wearing the Knockouts Title with the caption “stay tuned”. Also, in response to a fan tweeting a photo of Wilde and Sarita as the Knockouts Tag Team Champions, Wilde said “sounds like the roster needs some OG’s”. Wilde has not wrestled anywhere since February 2011, with her most recent Impact Wrestling match taking place in November 2010.

Wilde was a pretty big deal for a time. Check out her run in Impact Wrestling:

Opinion: This is certainly a surprise as Wilde’s time with the company feels like a lifetime ago. A lot has changed since she was around but she has a history in the promotion and a return, even a brief one, would not be the worst idea. I have no idea if she is actually coming back, but I’m sure some older Impact Wrestling fans would like to see her in the ring again.

Do you think Wilde will get back in the ring? Do you want her to? Let us know in the comments below. 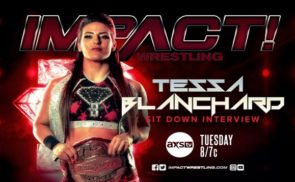