KB’s Review: What Are They Expecting?

Wrestling is a lot like any other form of entertainment, in that the matches and stories have to be built up over time. You can’t just run a major match and hope for the best. You need something to make the fans tune in to the show or see a match and some of these ideas can be less successful than others. WWE is trying another idea at the moment and for the life of me I have no idea why.

Over the last few weeks, WWE has promoted what will likely be the main event of Backlash by hyping Edge vs. Randy Orton as the Greatest Wrestling Match Of All Time. That term has been used over and over again and is even the post for the show. WWE has gone all out hyping up this idea and it’s probably about the worst idea as they could have chosen for the match and show as a whole. Today we’re going to look at how big of a problem this is really going to be for everyone involved.

We’ll start with the big one: they are putting some crazy high standards on the match and there is almost no way to live up to them. The greatest match EVER is a crazy high level to reach and there is no reason to believe that they can realistically pull this off. I don’t mean that as a knock against the two of them, but rather how absurd the whole thing is supposed to be.

The biggest problem is that there have been A LOT of wrestling matches over the years. It’s a crazy amount when you think about the total. Just to go with two prominent shows, you have Monday Night Raw and SmackDown, which have combined for a total of 2495 shows. If you go low and say there have been an average of six matches per show, you are looking at nearly 15,000 matches. Is it that hard to imagine getting up to say, 50,000 wrestling matches? Perhaps 100,000 given how many promotions there are to pick from in the United States alone?

So it’s going to beat this:

Of course a lot of those matches are going to be fairly easy to surpass, but do you have any idea how many great matches there are that you probably haven’t thought of over the years? There are easily hundreds if not even more matches that would be considered great, and that’s only if you limited it to singles matches on the big stage. That’s just so much to overcome and it’s going to sound ridiculous no matter how much WWE tries to hype it up as a possibility.

That’s where the whole thing went off the rails in the first place. How many people actually believe that such an accomplishment is going to be possible? When they first said the tagline, I looked at the TV with a bit of confusion because it was such a ridiculous statement. I wasn’t sure if it was going to even bet the best match on the Backlash card, let alone an all time classic.

Having that tagline for the match puts it on such a steep hill, because Greatest Wrestling Match Of All Time is a crazy standard to set. It leaves such little room for error that it is going to take away from what they are capable of doing. No matter what they can do in the ring, the response is going to be “it wasn’t as good as” insert match here.

It’s too much pressure. There is no realistic way that you can say “this is going to be the best ever” and then deliver on it, putting both Edge and Orton completely behind the eight ball. Instead of looking at the positives of their match, everything that they will do is going to be criticized and looked at on a different level. How are any two wrestlers supposed to do anything realistic with that kind of pressure?

Them there this week’s Monday Night Raw, where things got even worse. During an episode of the Peep Show with Edge as the guest, Christian asked if Edge still had it anymore. Could he have the Greatest Wrestling Match Of All Time? Did he still have it in him to reach that level? Christian even invoked Edge’s mom (who may or may not be Christian’s mom as well, depending on which timeline you’re looking at), eventually making Edge believe in himself enough to know that he can do it.

Do what though? See, in the whole segment, there was never any mention of Edge actually WINNING THE MATCH. I know there are a lot of things going on with the story, but you would think that the whole point would be about, you know, winning the match. But no, if you listen to Edge and Christian talking, the point was to have a great performance, not actually win the match.

When did we get to the point where a great performance is more important than winning the match? I know the concept has been around for a long time now but that doesn’t make it a good idea. WWE has this weird (and incorrect) mentality that wins and losses don’t mean anything (yet they have run off of Brock Lesnar ending the Streak for six years plus now) and now they’re just flat out saying that it’s about looking good rather than beating your opponent.

If the winner of the match doesn’t matter, why should I care about the story they’re telling? Why are they even having a feud whatsoever? Why even have a finish to the match? Just let then wrestle for a certain amount of time, shake hands after, and praise themselves for having that great of a match. If the winner and loser doesn’t matter, at least according to one of the people involved, why should I care about anything that they are doing outside of the match? It was a bad way of presenting the whole thing, which isn’t a mistake they can afford to make given how things have been set up.

Throw this one in there too:

I’m not sure what is going to be happening at Backlash, but I know I can expect a rather good, if not great, match from these two. They are both incredibly talented, but having the Greatest Wrestling Match Of All Time isn’t something that you just decide to do at the drop of a hat. If it was this easy to do, why haven’t we seen it happen time and time again over the years?

Edge and Orton are all time greats and have had some very good matches against each other over the years, but I haven’t seen anything to suggest that they are going to have something this amazing. There are almost no combinations where I would believe that you could say that they would have such a match and then be able to deliver on it. This is the major selling point of the entire pay per view and I am almost scared to imagine how many times we are going to hear about how great the match is, both during and after Backlash takes place.

I have no idea who thought this was a good idea but it has put Orton and Edge into a completely unfair situation. There is no realistic reason to believe that they are going to be able to have the Greatest Wrestling Match Of All Time and when you add in the fact that neither seems overly interested in actually WINNING THE MATCH, what are they actually expecting? The match will be entertaining and high quality, but it takes an all time effort to even approach the level they’re being asked to reach. It isn’t fair, nor is it smart, and I’m not looking forward to WWE bragging about reaching a goal they didn’t even approach. 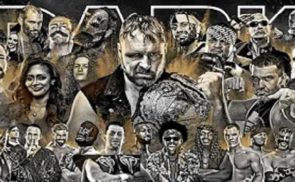