Time for that sweet lower midcard action with the highlights thrown in for a bonus. Actually it’s probably the other way around but what else am I supposed to talk about here? We’re almost up to Backlash so the hype videos will be strong around here, even if the show isn’t that big in the first place. Let’s get to it.

Ricochet has changed things up a bit: he has a backwards hat now. Ricochet takes him down by the leg to start and they grapple for leg control for a bit. Neither can get a chinlock/choke so Ricochet goes for a wristlock instead. That’s reversed into a headlock takeover but Ricochet sends him to the apron. Ricochet gets his arm slammed onto the apron to put him in real trouble for a change.

The armbar goes on and MVP is rather pleased with what he’s seeing. A belly to back suplex onto the arm gets two but Thorne misses the Cannonball. Ricochet is back with a spinwheel kick and the springboard spinning crossbody. A running shooting star press hits Thorne’s raised knees but it’s the Kickback to give Ricochet the pin at 6:05.

We look back at the Jeff Hardy/Elias hit and run.

Quick look at the battle royal to get Sheamus back in the Intercontinental Title tournament.

Sheamus kicks him down to start and grabs a chinlock, only to have Bryan fight back with the kicks in the corner. The suicide dive to the floor connects and we take a break. Back with Bryan working on the arm but Sheamus elbows him down. The top rope clothesline gives Sheamus two and he says he created the YES Movement when he beat Bryan at Wrestlemania.

Bryan fights back but gets Irish Cursed into the Cloverleaf. That’s broken up so Sheamus takes him up top for a superplex. Bryan blocks that as well and hits the missile dropkick but the YES Lock is countered into White Noise for two. Sheamus runs him over again and loads up the Brogue Kick….and here’s Jeff Hardy. The distraction lets Bryan hit the running knee for the pin at 13:12.

They’re at it again:

Non-title. Before the match, Charlotte talks about how she wants one of the NXT wrestlers in the crowd to step up and become her next challenger so she can make them bow down. We hear about Asuka’s resume and Charlotte thinks the Empress wants to be the Queen. The threat of the Asuka Lock is broken up early on and Charlotte strikes away. A shot to Asuka’s knee sends us to an early break.

Back with Charlotte staying on the knee, including a kick to said knee to cut off Asuka’s striking. Charlotte charges into a kick to the head though and a German suplex into a Shining Wizard gets two. Joe: “A flying knee each day keeps the coherency away.” Asuka pulls her into the triangle choke, which is reversed into a Boston crab.

Asuka rolls out and grabs a kneebar but Charlotte stands up and grabs her own German suplex. That just means another triangle from Asuka, with Charlotte powerbombing her way to freedom for two more. Charlotte kicks her to the floor….so here’s Nia Jax in Asuka’s mask to Asuka’s music for a distraction and the countout to give Charlotte the win at 9:47.

They lock up to start and Benjamin has to dodge a kick to the face. A dropkick connects though and Cedric grabs the armbar. Shelton breaks up the springboard though and we take a break. Back with Shelton hitting a big backdrop for two and grabbing the chinlock. That doesn’t last long and Shelton is back up with a tornado DDT.

Shelton hits a heck of a shot to the face for two but Paydirt is countered into a rollup for the same. They’re starting to pick up the pace here and it’s getting rather entertaining in a hurry. The Neuralizer gives Cedric two more and the Michinoku Driver is enough to finish Benjamin at 11:02.

Non-title and here is Bobby Lashley to watch. Hold on though as here’s Lana to stand next to a confused Lashley. McIntyre hammers him down in the corner to start and adds a clothesline, followed by the Glasgow Kiss to the floor. Lashley offers a distraction though and MVP sends McIntyre into various things. Back in and a running big boot gives MVP one but McIntyre shrugs it off and hits the top rope shot to the head. Lashley pulls MVP outside so McIntyre dives onto both of them. The Claymore finishes MVP at 2:56.

Post match Lashley grabs the full nelson on McIntyre to end the show.

The champ is on: 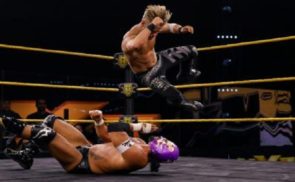 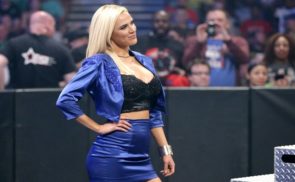