The roster is bolstered. Despite its success, AEW is still a very young wrestling company. They have only been running regular events for a little over a year now and that means they have not had the time to firmly establish several things. This includes their roster, which is constantly changing. Another wrestler has been added to that roster and it is a smart signing.

In addition to its regular Dynamite show, AEW also presents a weekly YouTube series called Dark. This show is the straight wrestling show, featuring very little in the way of storylines or promos, but it does offer a lot of in-ring competition between several stars of varying levels. Some wrestlers are brought in as enhancement talents but occasionally someone will be successful enough to earn a job. That has happened again.

During an interview with Inside The Ropes, Serpentico has announced that he has been signed to a full contract with All Elite Wrestling. Septentico has been wrestling with AEW since March, under both the Serpentico name as well as Jon Cruz. He and Luther, together as the Chaos Project, faced Chris Jericho and Jake Hager in the main event of the October 7 edition of Dynamite.

Serpentico has had some nice matches with AEW. Check out some of his work:

Opinion: This isn’t the biggest surprise as Sepentico has gotten some higher profile roles than some of the regular enhancement talents. I can see why AEW wanted to sign him and Sepentico could wind up being a nice signing for the company. He has a creative enough gimmick and look and could be put into a variety of spots on the card. It is good to see AEW doing something like this and hopefully it works out for everyone.

What do you think of Serpentico? What do you expect to see from him in AEW? Let us know in the comments below. 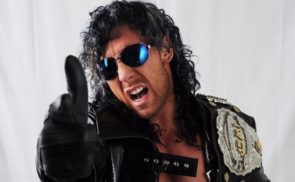