It’s another week and I still have no idea what to say about this show. Odds are it’s going to be Tony Nese and Ariya Daivari dealing with some other young whippersnappers because that’s all they have done for months. Oh and some Ever Rise/Bollywood Boyz stuff because that’s still going. Let’s get to it.

Mansoor and Martel get things going but it’s off to Parker in a hurry for a double shoulder. Samir comes in and gets caught in an armbar so Ashante comes in, only to get elbowed down by the Boyz. That doesn’t last long so it’s off to Martel vs. Atlas, the latter of whom helps Stallion shoulder Martel down for two. Parker comes in and gets caught in Stallion’s headlock as the rapid fire tagging continues.

Adonis comes back in and gets distracted by Martel, allowing the Boyz to take him down. We finally slow down a bit with Adonis getting beaten up by the rotating villains. Sunil grabs a chinlock for all of ten seconds before Adonis is sent back into the corner for more stomping. A drop toehold into an elbow to the back gets two and a top rope back elbow is good for the same.

Martel can’t slam Samir onto Adonis though and it’s off to Atlas to clean house. Everything breaks down again and Adonis dropkicks Parker for two. Mansoor’s Death Valley Driver gets the same but he gets taken down into the Power and the Glory for another two. A bit of miscommunication lets Mansoor grab a Falcon Arrow for two as everything breaks down again. Stallion comes in off the blind tag and headbutts Sunil for the pin at 9:59.

We look at Santos Escobar backing out of his match with Karrion Kross on NXT. The match happens next week or Escobar loses the title.

Tony Nese is on commentary. Grey goes at Daivari to start but gets hit in the ribs. An early attempt to go after Grey’s leg lets him kick Daivari to the floor, setting up a high crossbody back inside. A belly to back suplex gives Grey two but Daivari is right back with a DDT for the same. We hit the neck crank on Grey but he slips out and grabs a sunset flip for two.

There’s a neckbreaker to drop Daivari, who pops right back up with a sleeper. The Rock Bottom plants Grey for two more but Grey ducks the hammerlock lariat. A superkick connects to Daivari and they’re both down again. Grey sends him out to the apron and then clotheslines him to the floor but stops to glare at Nese. Daivari is sent inside but Nese holds up Daivari’s chains to distract Grey. The distraction lets Daivari get in a dropkick and the hammerlock lariat is good for the pin at 6:57. 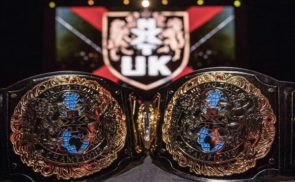 History Has Been Made! Long Title Reign Finally Ends 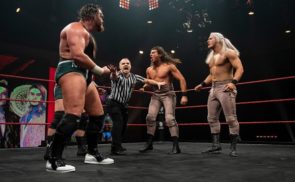