It’s the go home show for Elimination Chamber and that isn’t going to make the biggest difference around here. Every week I hope that we’re going to get something a little different on Main Event but there is no reason to believe that is going to be the case most of the time. Let’s get to it.

Gulak slips out of a fireman’s carry to start and manages to drive T-Bar into the corner. A sunset flip doesn’t work for Gulak so T-Bar blasts him with a clothesline for two. T-Bar hits a backbreaker into a middle rope splash for two more, followed by Eyes Wide Shut for the pin on Gulak at 3:56.

Here are Roman Reigns, Jey Uso and Paul Heyman for a chat with Adam Pearce, who is already in the ring. Reigns tells Pearce that he isn’t waiting on him so let’s get on with this. Pearce doesn’t call any shots around here and Reigns isn’t waiting on Pearce or Edge. Reigns knows that Edge hasn’t announced his Wrestlemania match because he knows Reigns will beat him all the way onto a Legends contract.

Pearce seems to laugh it off but Heyman asks what he’s going to do about it. Fire Reigns this close to Wrestlemania? Last year’s show didn’t have Reigns and it was the lowest attended Wrestlemania of all time. Pearce says it’s time to start the qualifying process, and there are going to be two names who don’t need qualifying matches. Those would be Jey Uso and Kevin Owens, the latter of whom has Reigns outside the ring and in Pearce’s face. Reigns doesn’t think Pearce gets this but Heyman says it’s going to be on Reigns’ time.

We see King Corbin and Sami Zayn beating Rey and Dominik Mysterio to qualify for the Chamber.

Non-title. Ziggler takes Bryan down for an early two but Cesaro comes in for a double slam. It’s off to Roode, who has to avoid the YES Lock, and gets sent outside. Cesaro is right there and is whipped into the steps. Sami Zayn and King Corbin come out to watch and we take a break.

Back with Bryan in trouble as Roode snaps off a suplex for two and hands it back to Ziggler. Bryan takes Ziggler down but Roode decks Cesaro, allowing Bryan to grab a rollup for two. Roode’s spinebuster gets two more on Bryan but Ziggler misses a charge in the corner, allowing the hot tag to Cesaro. Everything breaks down and Bryan hits Roode with the running knee. The Fameasser gets two on Cesaro but he’s right back up with the Swing into the Sharpshooter to make Ziggler tap at 11:04.

Post match Jey Uso, Sami Zayn and King Corbin all come in for the brawl. Everyone goes at it until Kevin Owens runs in for the Stunnerfest. Roman Reigns watches from the back as Owens sits down, saying that he’s coming for Reigns to end the show.

If Kofi wins, he’s in the Chamber but if Miz wins, John Morrison is in. Miz shoulders him down to start but it’s way too early for either to hit a finisher. Kofi gets in a shot to the ribs and goes up top for a chop to the head. That’s enough to send Miz outside and Kofi hits a kick to the face from the apron.

The middle rope ax handle to the floor connects as well and a middle rope dropkick gets two back inside. A regular dropkick puts Miz on the apron but this time he catches Kofi with a knee. Miz’s neckbreaker over the middle rope and another one to the floor has Kofi in trouble as we take a break. Back with Miz getting two off a DDT and throwing Kofi outside to keep up the beating. That sets up the top rope ax handle for two more and we hit the cravate.

Kofi rolls out and fights up, including the running stomp to the chest. The Boom Drop gets two but Trouble in Paradise misses, allowing Miz to get his own two. SOS gives Kofi two more but Miz gets smart and takes out the knee. The Figure Four goes on, with Kofi getting over to the rope without much trouble. The Skull Crushing Finale is countered into a rollup for two and now Trouble in Paradise connects to give Kofi the pin and the spot at 14:11.

Elias is here with Ryker, who is now in trunks for a change. Ryker cranks on the arm to start but gets caught in a headlock for his efforts. A crossbody gives Carrillo two before running the corner for the big armdrag. That means a big dive to the floor to take Ryker down and we take a break.

Back with Ryker hitting a spinebuster for two, followed by the side slam for the same. The chinlock goes on and, after a slingshot suplex, goes on again. Carrillo fights up and low bridges him to the floor, setting up the springboard elbow to the face. Ryker has had it with this though and hits Carrillo in the face, setting up a swinging Boss Man Slam for the pin at 9:10.

Non-title and the winner enters the Chamber last. AJ Styles is in at #1 and….we’ll find out who is joining him after he talks about being sick of hearing about Kofimania II. His attorney (Joseph A. Parks of course) and Omos have gone over the odds and he can’t lose on Sunday. Kofi Kingston is in at #2 and they have almost an hour for this. AJ whips Kofi into the corner to start but misses a charge, allowing Kofi to hammer away. A belly to back suplex puts Kofi down for a few seconds but he low bridges AJ out to the floor there’s the Trust Fall to the floor.

With AJ down, Xavier Woods needs to give us a trombone concert on the announcers’ table. That earns him a rather high one armed chokeslam from Omos over the barricade. That’s enough for Omos to be ejected but AJ uses the distraction to take out Kofi’s knee again.

We take a break and come back with AJ putting the bad knee in a half crab. Kofi gets out so AJ puts him on top, only to have Kofi shove him down and hit the middle rope splash to the back. The bad knee means it can only be a two count so AJ grabs a DDT on the leg. The Phenomenal Forearm finishes Kofi at 11:03 and it’s Drew McIntyre in at #3.

A quick belly to belly suplex sends AJ flying and Drew drops him ribs first across the top rope. Drew gets in a big boot to leave AJ on the apron and we take a break. Back with AJ being whipped hard into the corner and then into the steps. Drew hits a Michinoku Driver for two but AJ goes to the throat for a breather. AJ gets caught in the reverse Alabama Slam out of the corner but the Claymore is cut off with a kick to the face. That sends Drew to the floor and AJ nails the slingshot forearm.

A knee to the face drops Drew again and a running forearm sends Drew into the post as we take a break. Back again with Drew tossing AJ again but diving off the top and right into an enziguri. The Styles Clash is countered with a backdrop but AJ takes out the knee and puts on the Calf Crusher. Drew headbutts his way to freedom though and sends AJ throat first into the middle rope. The Claymore gives Drew the pin at 29:49 total.

Jeff Hardy is in at #4 and, after an inset promo of Hardy talking about needing to get back to Wrestlemania, he forearms Drew down to start. Drew gets knocked to the floor and a dive off the apron takes him down as we go to a break. Back with Drew making another comeback and snapping off an overhead belly to bell, followed by an overhead belly to belly for good measure. A neckbreaker lets McIntyre nip up again and, after countering a quick Twist of Fate attempt, the Futureshock gets two.

Hardy falls out to the floor so McIntyre suplexes him out there as well, leaving them both down. Back in and Drew puts him on top for a top rope superplex and another near fall. The Claymore misses though and Jeff grabs the Twist of Fate. The Swanton hits knees though and the Claymore gets rid of Hardy at 42:59 total. Randy Orton is in at #5 and McIntyre realizes he’s in some trouble.

Back from another break with McIntyre sending Orton into the barricade….but the lights go out and Alexa Bliss takes over every screen in the arena, including the fans. Orton is counted out at 49:09, leaving Sheamus at #6 to complete the field.  Sheamus jumps Drew from behind and beats him down without much effort.

The referee asks Drew if he wants to do this and we start the match, despite there not being any bells or starts/stops between the previous falls. Sheamus sends Drew’s bad back into the corner and drops a knee for two. Despite Drew clutching his back, Sheamus grabs an armbar, allowing Drew to fight back up.

Drew tries to jump over him out of the corner but gets powerslammed down for two more. The Glasgow Kiss gets Drew out of trouble and there’s the Future Shock for a double knockdown. Drew is sent to the floor but gets in a quick shot to put Sheamus down. The Claymore misses though and the Brogue Kick finishes Drew at 58:46.

Post match Sheamus says that makes him the odds on favorite and he promises to win the title because Drew can’t beat him. 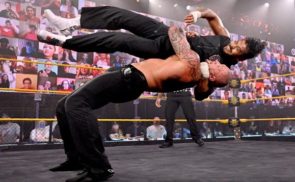