For the first time in five years, Saraya will finally make her in-ring return to the squared circle. She will wrestle Britt Baker in her return bout, which has been highly featured as one of the top feuds heading into tonight’s AEW Full Gear.

It’s very exciting for the AEW fans and for Saraya herself to have the opportunity to perform after a five year absence. There hasn’t been any word on her training or how much she’s been in the ring over the past few months. AEW only just released the news that she was medically cleared to compete at Full Gear this past week.

Tony Khan, who participated in the standard conference call before Full Gear, apparently didn’t have any concerns about Saraya being physically capable of performing in the ring when she signed with the company. Sean Ross Sapp of Fightful confimed the following via Twitter about what plans were in place for Saraya if she couldn’t actually wrestle:

Tony Khan tells me that @Saraya was confident she would get cleared and felt good. In the event that they didn't, they had a lot of ideas, and she would have been a great ambassador for AEW.

Saraya is almost considered a “wrestling princess” of sorts. She’s joked consistently over the years that she was “wrestling in the womb.” The fact that we were all robbed of five years of her in-ring career is tragic. However, much like Bryan Danielson or Edge before her, Saraya has been able to beat the odds and make a comeback to the ring.

Britt Baker has been the one constant face at the top of the AEW Women’s division essentially since the company’s inception in 2019. It makes sense for Saraya to go right after the heart of the division, but does she win tonight’s match? There seems to be more of a story with Britt taking the win. Also, Saraya would likely have to go right after Toni Storm for the Women’s Title.

Tonight’s match will be a crowd pleaser. Even if the match itself is messy and ring rust is a factor, most people are going to be really forgiving and just happy to have someone we lost for five years back in the ring.

Aside from a few names, the AEW Women’s division has been struggling to find consistency in its fueds and chartacters over the last three years. All the talent in the world, literally, in the division. However, it’s lacked that true star power presence to build the entire division around. A lot of people are counting on Saraya to be that person and tonight’s the official first night of her reign. 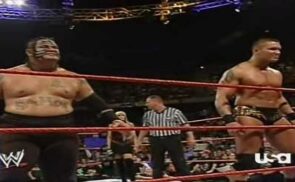