REPORT: Stone Cold Steve Austin Not Training for a Match at WrestleMania 39

One of the bigger stories of the month has been WWE offering Stone Cold the chance to do another match down the line. It was not clear if they meant Austin doing something at a Crown Jewel event, or did they mean something for WrestleMania 39.

The rumor mill got even hotter when videos of Stone Cold training came out on Instagram. People thought that after his great match in Dallas with Kevin Owens, he’d stepped up his training regiment to be ready for WrestleMania in Hollywood.

The Texas Rattlesnake released his latest video on Instagram explaining his workout routine and addressing the “speculation” that has been built over his training.

Here’s the latest news right from the mouth of The Texas Rattlesnake:

Now, we have to remember that Stone Cold wrestled in Dallas and the wrestling world wasn’t this intense about his workout schedule a year ago. Also, Austin has been doing this for more than 30 years. He knows how to sell a ticket and it’s not even 2023 yet. There’s a chance that Triple H or whoever makes the phone call, just hasn’t done it yet.

One of Stone Cold Steve Austin’s greatest traits is he can basically work with anyone. That’s why he’s so easy to speculate about as a fan. He seems ready to go and there’s a good chance that WWE will call him if The Rock can’t commit to wrestling Roman Reigns in April. It’ll be fun to speculate, but we should be careful about assuming that we know everything on the outside.

Related: Ric Flair Rules Out CM Punk, The Rock and John Cena as Opponents for Stone Cold at WrestleMania 39

The thing is that Stone Cold is one of the guys who doesn’t have to have a “match” every year at WrestleMania. He could easily do a few Stunners and maybe a brawl with a younger heel. That’s good stuff. If WWE wants to do Goldberg vs. Stone Cold, or Austin vs. Cena, that seems doable in Saudi Arabia.

This was Austin’s way of saying that he’s not going to respond to the speculation. We can have fun in the months to come, but a lot of people would lose their minds if the glass breaks at the Royal Rumble. That would be a sight to see. 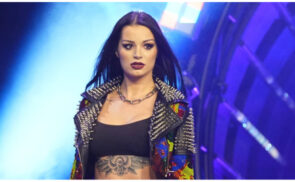