Survivor Series is next week and odds are we find out what we are going to be getting in the men’s WarGames match. You can probably guess one of the teams but we are going to need another team to oppose them. The rest of the show could use some work too though and we might be getting something like that tonight. Let’s get to it.

Here are the Brawling Brutes and Drew McIntyre for a chat, likely about their officially announced WarGames match against the Bloodline. Sheamus checks his mic in a callback to last week before asking how many times he and McIntyre have been to war. They have known each other for twenty years and it has created respect between them. Sheamus even had McIntyre as the best man at his wedding three weeks ago.

The fans chant UCEY but Sheamus says they want a Brutey. Drew: “Did you just say Brutey?” Sheamus wants McIntyre to be an honorary Brute in WarGames and McIntyre is down. Cool moment, though it might have been a bit better if they hadn’t shown McIntyre in the graphic when they came to the ring. They’re ready for WarGames, but they need a fifth member. That will be….interrupted by Sami Zayn, calling them “his dogs”.

Sami says the Bloodline is feeling pretty ucey about WarGames because you’re talking to the master strategist, the Honorary Uce and…..Ucey In The Sky With Diamonds. He guarantees that the Bloodline will win WarGames and if Butch is ready, they can go earlier than expected tonight. Sheamus thinks Sami will have a problem with the fifth man, because it’s the last person he’s going to expect.

Ali has taped up ribs after Bobby Lashley wrecked him on Raw and is wrestling against doctor’s/Ricochet’s recommendations. Ricochet takes him down to start and Ali’s ribs are already bothering him. Ali grabs him in the corner but a reluctant Ricochet elbows his way out of trouble. That doesn’t work for Ali, who hits him in the back of the head to take over. A top rope Backstabber sends Ricochet outside and we take a break.

Back with Ali in trouble off a superplex during the break but still managing a headscissors. A running dropkick sends Ricochet to the floor and a good looking sling shot dive….is pulled out of the air. Ricochet Michinoku Drivers him on the floor but the Phoenix splash misses inside.

Ali’s Koji Clutch sends Ricochet over to the ropes so he blasts Ali with a heck of a discus lariat. A moonsault gives Ricochet two and he goes to the ribs to cut off Ali’s comeback. The ribs are fine enough to grab a tornado DDT but the 450 takes too long to set up. Ricochet goes up as Ali is getting to his feet and hits a shooting star crossbody to finish Ali at 11:02.

Jey Uso yells at Sami Zayn for speaking for the Bloodline and guaranteeing a win in WarGames. Jimmy finally gets involved and says they need to be on the same page before Roman Reigns arrives. Sami is told to chill and seems ok, complete with a special handshake with Jimmy as Jey glares.

We look at the Usos retaining over the New Day last week.

New Day is disappointed but Imperium comes in to say New Day is everything wrong with wrestling. Woods says they’ll get a partner.

Emma gives Madcap Moss some water as Moss is upset over getting choked out three weeks ago. She seems to believe in him.

Scarlett is here with Kross. Moss goes right after him to start and stomps away in the corner as we get a graphic with both of their names and faces. Simple, effective, tells fans who they are without wasting any time. Do more things like that. Back up and Kross runs him over, setting up a release tiger suplex. Scarlett even gets in a slap, which fires Moss up enough to run Kross over with a shoulder. Some running shoulders in the corner have Kross in trouble but a Scarlett distraction lets Kross get in a cheap shot. The Krossjacket goes on and Moss can’t power out, setting up the tap at 3:45.

Kross takes his time letting go and Emma runs down to check on Moss.

Here is Bray Wyatt to make amends. Bray talks about being conditioned a certain way and it makes you feel like changing is impossible. Then last week he got a little too violent on LA Knight and wants to apologize. Cue Knight, who says that he might have earned some respect by not being afraid of Wyatt last week. Knight says respect is the most valuable quantity around here and slaps Wyatt in the face. That makes them even but Wyatt looks ready to snap.

Wyatt says ok, they’re even, and he’s going to fight the urges of what he wants to do to Knight. Now though, Knight has a decision to make that will affect the rest of his life. Wyatt extends his hand but Knight slaps him again, saying he has been waiting all week to do that. Wyatt stares him down as the Titantron behind Knight starts to go all wacky.

We look back at Shayna Baszler and Ronda Rousey beating down Shotzi last week.

The Usos ask Karrion Kross if he is the fifth member but Jimmy doesn’t think so. Kross says he isn’t a follower but he’ll come for Roman Reigns’ titles on his own time.

Ronda Rousey is here with Baszler. Shayna knocks her down to start and strikes away until Shotzi fights up. Rousey trips Shotzi up though and the beating is back on. Shotzi fights up again but this time Rousey messes with the hair. An enziguri gets Shotzi out of trouble but she goes after Rousey, allowing Shayna to grab a German suplex.

Shotzi makes her third comeback with the hip attack against the ropes but Rousey offers her fourth distraction so Shayna can knocks Shotzi into the corner. Cue Raquel Rodriguez to even things up so Shayna yells at her. That’s enough of a distraction for Shotzi to avoid the arm stomp and roll Shayna up for the pin at 4:55.

LA Knight tries to leave, but he is NOT scared of Bray Wyatt.

Post break and Knight is out cold in the back with a bunch of stuff on top of him.

The brawl is on before the bell and Kofi tries the trust fall, only to get pulled out of the air. Imperium drops him onto the apron so Woods loads up a dive of his own. Gunther cuts that off with a chop but Strowman comes in and we ring the bell. That’s enough for Gunther to bail as we take an early break.

Back with Woods fighting out of trouble and kicking Kaiser away, allowing the tag off to Strowman. Gunther comes in as well and Strowman chases him around the ring, shouldering various people down on the way. Back in and Gunther has to escape a powerslam, setting up the big chop. A spinebuster gives Strowman two but Gunther slips out of the Monster Bomb. The double tag brings in Kaiser and Kofi but a blind tag allows Woods to hit the Midnight Hour for the pin at 7:21.

Strowman heads to the back where he runs into Ricochet, who doesn’t think Strowman is winning the tournament. Ricochet dubs himself a flippy flipper (Ricochet: “Your words not mine”) and says Strowman will have some trouble with him.

The respective groups are here too. Butch hammers away to start but charges into a powerbomb. That’s enough for Dunne to be sent outside but he’s right back in with a tornado DDT for two. Sami knocks him outside and we take an early break. Back with Sami hitting the Blue Thunder Bomb as everyone else gets in a fight on the floor. Sami cuts off a comeback with an exploder suplex into the corner but Sheamus throws Jey Uso inside, breaking up the Helluva Kick. The Bitter End gives Butch the pin at 7:49.

Post match the big brawl stays on but Roman Reigns comes out to wreck things. McIntyre takes the shirt off and wants the big fight but Solo Sikoa offers a distraction. The spear drops McIntyre so Sheamus wants a fight of his own. The slugout is on with Reigns hitting a Superman Punch….and it’s Kevin Owens (limping a bit) for the staredown with Reigns, apparently as the fifth man.

The knee is good enough to hit a superkick on Jimmy Uso before Owens goes inside for the fight with Reigns. After Roman is cleared out, Sami comes in for the big distraction, allowing Reigns to hit the Superman Punch on Owens. The spear is cut off though and it’s a Stunner to Reigns to end the show. 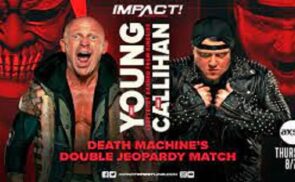