It is the go home show for Overdrive and that means we need to find out the other finalist in the X-Division Title tournament. Other than that, we have what should be a violent match between Eric Young and Sami Callihan, where blood is required. It should be an eventful show so let’s get to it.

A laughing Crazzy Steve is in the ring and asks if we can feel it. Brace yourselves for the barrage of brutality that is Black Taurus.

They flip around to start with neither being able to get very far. A monkey flip sends Taurus into the corner but he blasts Black pretty hard. Black is fine enough to send him outside for a big dive. Back in and a moonsault misses for Black, allowing Taurus to powerslam him for two. A Sling Blade gives Taurus two more but Black is back with a pop up Meteora for two of his own. Taurus catches him on top, only to get pulled down with a super Spanish Fly. They slug it out with Black getting the better of things, only to get caught in Taurus’ spinning piledriver for the pin at 6:19.

We get the contract signing with Josh Alexander and Frankie Kazarian (with their wives next to them). They respect each other and Kazarian is sorry that he has to take the title from Alexander. The wives (Jade Chung and Traci Brooks) aren’t happy with what is being said but everyone splits before it gets violent.

Post break, Kazarian and Alexander say they’ll do it tomorrow and everything seems cool. Bully Ray says he’s coming for the winner, but Kazarian doesn’t believe that Ray will do it straight up. Ray doesn’t like that and leaves, with Alexander asking why it matters if Ray is honest or not. He’ll be ready no matter what.

It’s Ace Austin/Chris Bey for the Club with Austin and Kyle Fletcher starting things off. Austin grabs the arm and brings Bey in for a running dropkick in the corner. The Club takes Fletcher down and poses on him but Singh tags himself in. Austin gets dropped face first onto the top turnbuckle and a Downward Spiral makes it worse.

We take a break and come back with the Guns bouncing Singh back and forth with right hands. Sabin cutters Austin and drops Bey, followed by the Dream Sequence on Singh. Shera comes back in to clean house but the Aussies double team him down. Austin crossbodies Fletcher down and clears the ring, only to have Davis do the same thing, but Aussier. An assisted top rope cutter drops Bey for two but he’s able to slip out of Coriolis. Bey is back up with a big dive onto the floor (while too sweeting Austin on the way over) before coming back in for an assisted Art of Finesse to pin Fletcher at 12:02.

Rosemary yells at Taya Valkyrie about the missing Jessicka, who was told to go get a drink.

Jordynne Grace is ready for Masha Slamovich so let’s do Last Knockout Standing at Overdrive.

Savannah Evans and Rosemary are here too. Taya kicks her into the corner to start and a clothesline gets an early two. The running knees in the corner get the same but another charge sends Taya shoulder first into the post. Tasha loads up the Black Out but gets reversed into the Road To Valhalla. That’s blocked as well only to have Taya sit down on it to pin Steelz at 2:20.

Post match the brawl is on but Jessicka, complete with one of those helmets with a beer can on either side, makes the save.

Josh Alexander asks Tommy Dreamer about Bully Ray, which Dreamer says is the last 25 years of his life. Dreamer believes that Bully is a changed man.

Trey Miguel was sore after last week’s match but he is ready to get his X-Division Title back.

Old School (Extreme) Rules. Dreamer starts fast with a hiptoss and a Cactus Clothesline sends them both outside. A cookie sheet shot to the head rocks Maclin and Dreamer peels back the floor mat. The piledriver on the floor is broken up and Maclin gets in a posting. Maclin drops a Cactus Jack elbow off the apron and it’s time to bring in some chairs. That takes too long though and Dreamer gets in some kendo stick shots, setting up a crossbody to drive Maclin through a chair.

The White Russian legsweep drops Maclin again but he grabs an Angle Slam for two. Dreamer gets in another shot and grabs some water/popcorn, both of which go into Maclin’s face. A cutter gives Dreamer two and it’s table time (with help from a fan dubbed Mr. Impact). Maclin blocks the Death Valley Driver though and DDTs Dreamer onto a pile of chairs for the pin at 8:06.

Post match Maclin loads up a Conchairto but Bully Ray comes in for the save. Moose runs in to beat down Ray but Josh Alexander makes another save and has a staredown with Ray. Then they put Maclin through a table and Ray very slowly hands Alexander the title.

In her first interview around here, Masha Slamovich (in Russian) insults the interviewer for asking stupid questions. No one wants to talk about her wins because she had one bad night. Her expectations for Overdrive: death.

Kid starts fast with a neckbreaker and they head outside with Kid hitting a big dive. Back in and some moonsault elbows hit Swann but a third only hits mat. Swann fights back but gets caught with a release German suplex. The frog splash gives Kid two but he charges into a superkick. The middle rope 450 finishes Kid at 3:41.

Mickie James isn’t happy with Taylor Wilde for getting involved last week but Wilde didn’t want interference to end Mickie’s career. See, Wilde should be the one to end it.

Video on Josh Alexander vs. Frankie Kazarian, including how the X-Division Title has been wrecked along the way.

This is Death Machine Double Jeopardy, meaning your opponent has to be busted open before you can win by pinfall or submission. Violent By Design jumps Sami during his entrance and bust him open before he even gets to the ring. We take a break before the bell with Sami saying start it up. Young hits a quick Death Valley Driver for two but Sami reverses a suplex on the floor.

It’s weapons time with Sami cutting Young’s mouth with a picture of the Death Dollz. Young is back up and they fight on the apron, with both of them going after the eyes. Sami Death Valley Drivers him on the apron and we take a break. Back with Young busted open as well and the two of them posting each other. The piledriver on the floor is countered with a backdrop and Sami throws a trashcan into the corner.

Back in and Young blasts him with a trashcan lid to the head before grabbing a kneebar. Sami reverses into something like a Figure Four but Young is out again. They fight up and slug it out until stereo headbutts put both of them down. Young is up first with a piledriver for two but another one is countered with a crotch grab. The Cactus Driver 97 gives Sami two of his own and another one finishes Young off at 17:38.

Post match Violent By Design comes out to stare down at Young to end the show.

Never Too Early: Way Too Early Possible Plans For Summerslam 2023 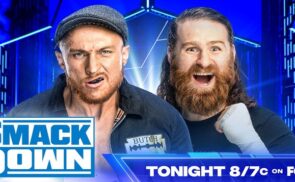