Oh no. Every now and then, a wrestling promotion will get behind someone and there is very little that is going to stop them. If the company has decided that they are going to push someone, it is time to see what they can do. WWE is no exception as they can get behind a wrestler in a heartbeat and things are going to start taking off in a hurry. Unfortunately, this week saw one of the things that can slow such a push down.

Sunday night at NXT Takeover: 31, Ridge Holland offered quite the surprising finish, as he attacked Adam Cole to end the show. The move saw Holland moving up the NXT ladder in a big way and seemingly becoming one of the new top stars in the promotion. It seemed that things were primed for a major feud in short order, but now we might have to wait a very long time to see what Holland can do at this level.

During this week’s NXT, Holland got in a brawl with Oney Lorcan, who dove on him during the fight. Holland fell down with a leg injury and was taken out of the arena on a stretcher. WWE has released an update on Holland, announcing that he has already undergone surgery due to a fractured and dislocated ankle, a patella dislocation and a patella rupture. There is no word on when Holland will be back in the ring.

Holland seems to be worth waiting for. Check out what he can do when he is healthy:

Opinion: That’s horrible to hear as Holland looked like he could have been the next big thing in NXT and now he is going to be out of action for a long time. He never even got the chance to get off the ground and it was clear that NXT wanted to do something special with him. You don’t get to end a Takeover without being something worthwhile and now this. Hopefully everything works out for him, because it would be a shame otherwise.

What did you think of Holland? What should he do when he gets back? Let us know in the comments below. 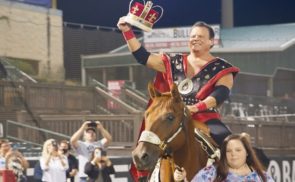