Stipulation Added To Roman Reigns vs. Jey Uso Hell In A Cell Match

That’s one way to go. We are less than three weeks away from Hell In A Cell and that means things are going to get a lot bigger in a hurry. The show is going to feature a lot of important matches taking place on the same night and more than a handful of them are going to take place inside the show’s title structure. That is going to include a big rematch, and now we know a little more about it.

The main event of Clash Of Champions saw the now monster villain Roman Reigns defeating his cousin Jey Uso in a brutal match. Jey would not stay down for the pin, which eventually meant that his brother Jimmy had to come out and throw in the towel. Reigns wanted more than just to retain the title, as he demanded Jey acknowledge him as the Tribal Chief. Now he is going to want Jey to say something else.

This week on SmackDown, Reigns announced that his rematch with Jey, which will be taking place inside the Cell, will be an I Quit match. Reigns announced the match last week on SmackDown but said that there would be a stipulation, which was not named at the time. The match will be Jey’s second match inside the Cell though his first as a singles wrestler, while Reigns has been in three previous Cell matches.

Both of them have been here before. Check out their time inside the Cell:

Opinion: This is certainly different and I can get the idea, but it’s a little weird to have a gimmick match inside of a gimmick match. It is far from a bad idea, but I’m thinking it might be a bit of overkill. That being said, Reigns vs. Jey was so good the first time that it makes a lot of sense to run it a second time. Topping their previous effort will be difficult, but I wouldn’t bet against Reigns at the moment.

Do you like the idea? How do you see the match going? Let us know in the comments below. 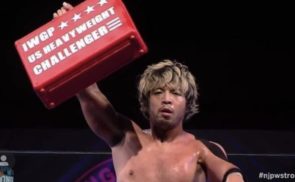